Re-Radicalization of the Gulenist Terror Cult

Even though most members of this terrorist organization were passivized, the ongoing debates show that there is fear they could turn into the lone-wolf terrorist as in the case of Daesh sympathizers in Europe. 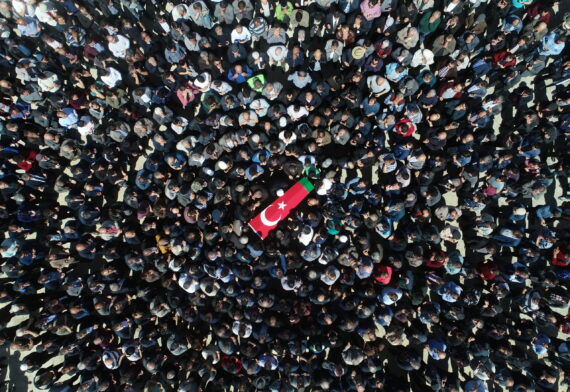 Drone photo shows the funeral ceremony of Fatih Ozmutlu, one of the 4 university staffers who were shot dead by a research assistant at Eskisehir's Osmangazi University, in Seyitgazi district of Eskisehir, Turkey on April 06, 2018. Anadolu Agency

On April 5, a shocking incident occurred at Osmangazi University in Turkey’s northwestern Eskisehir province. A research assistant in the Department of Education killed four staff members with whom he worked closely at the same university. After the incident, it was declared to the public that the ongoing dispute between the attacker and staff based on the FETO (Gulenist Terror Organization) investigation at the university might be one of the reasons for this mass killing.

Although the reason of this incident needs to be clarified after a detailed investigation, this event brought questions about the re-radicalization of the Gulenist terror cult to the forefront. After the July 15 coup attempt, a large number of members of this organization have been dismissed from public institutions and universities due to their links with FETO. As Deputy Prime Minister Bekir Bozdag stated last January, the number of personnel dismissed through statutory decrees is 107,174. Even though most members of this terrorist organization were passivized, the ongoing debates show that there is fear they could turn into the lone-wolf terrorist as in the case of Daesh sympathizers in Europe.

The collective group identity of FETO

To understand the probability of re-radicalization of its members, it is important to evaluate psychological dimensions of the collective group identity of FETO. The messianic structure of this organization creates a shared system of meaning and identity for the members of this terrorist organization as in other radical groups. After the coup attempt, the measures taken to break the connections between members created a significant hole in this shared system of meaning and identity.

Nonetheless, it is obvious that the members of this organization behave as if they still have high emotional salience attached to their group identity and try to show it through symbolic and ritual behaviors. For instance, the head of this terrorist organization, Fetullah Gulen, had an interview with Wall Street Journal a couple of days after the coup attempt. In the interview, he gave messages to FETO members via using symbols such as poems and photos.

The symbolic and ritual behaviors became the most common methods of keeping system of meaning and identity intact among the members after the coup attempt. A lot of these members who were prisoned made each other believe that the Prophet visits them in jail. They tried to convince themselves that they would soon be free. As prominent social psychologist Turner indicates, giving greater emotional weight to common elements, reinforcing them with an ideology of linked fate, and frequently overestimating within-group uniformity causes a glorified identity among the members of a group. This method, as clearly seen from the examples, is highly used to keep the salience of FETO as a group.

Although these kinds of measures were taken to consolidate the group identity of this organization, it should be reminded that it does not represent the real situation. The Gulenist criminal cult attacked civilian people on the night of July 15, 2016 and 249 people died and more than 1,400 were wounded. As they have no legitimation in the eyes of people, it is impossible to make their glorified aims come true. Some members of the organization faced with this reality in time and decided to become confessors. The rising numbers of confessors should be evaluated with the rising disappointment of FETO members. The disappointment of FETO members grew parallel to the fact that this glorification was far from reality. As a result, increasing frustration caused aggression among members to FETO.

Overall, even if there is a tendency to re-radicalize FETO, it is impossible for this illegitimate group to mobilize their members as they claimed. However, people should be ready for both the glorification and overestimation tactics of this group in their aim to manipulate society.