Turkey is having difficulty communicating its current foreign policy objectives and practices, which are closely linked to the country’s recent domestic challenges. Both Turkey’s traditional NATO allies and Russia are unwilling to cooperate with it in its efforts to meet security challenges related to the spillover effects of the Syrian war and the problems related to the FETO (Fetullah Gülenist Terror Organization). Indeed this reluctance is beyond the scope of a simple communication problem. 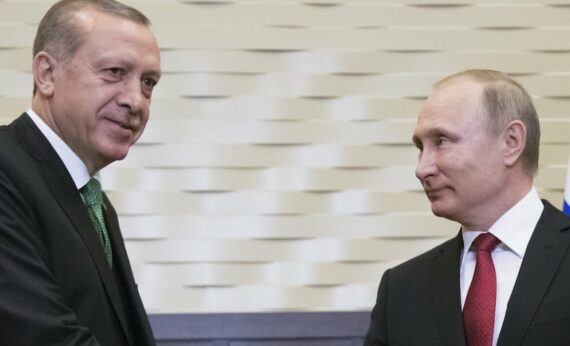 Turkey is having difficulty communicating its current foreign policy objectives and practices, which are closely linked to the country’s recent domestic challenges. Both Turkey’s traditional NATO allies and Russia are unwilling to cooperate with it in its efforts to meet security challenges related to the spillover effects of the Syrian war and the problems related to the FETO (Fetullah Gülenist Terror Organization). Indeed this reluctance is beyond the scope of a simple communication problem.

Turkish decision makers feel that the country’s traditional allies are now implicitly containing Turkey with their tacit encouragement of the terror organizations that are targeting Turkey. Both the US as well as EU members seem to have strong ties with terrorist elements such as the PKK and the FETO which constitute an existential threat to Turkish national security. The CENTCOM commanders do not hide their strategic cooperation and collaboration with the PYD and the PKK in Syria. Those terror organizations constantly target Turkey with the weapons provided by the US and other coalition partners.

The anti-DAESH coalition provided limited support to Turkey in its fight against the terror group, however the coalition partners also set some limits for Turkey in its fight against the terror group in the course of Operation Euphrates Shield. EU institutions and European politicians are pursuing biased policies to tarnish Turkey’s international image rather than cooperating in the areas where both sides have common interests. These are the main reasons why Turkey has to make a structural transformation in its foreign policy approach as well as in its priorities in its relations with the US, EU, and Russia.

This transformation is directly linked to Turkey’s rising security concerns in which change in the policies of Ankara’s historical allies is the main reason behind it. The new yet complex security environment and challenges made Turkey more introverted within the last two years. Turkish foreign policy did not choose an isolationist path, however unlike the more idealist era Turkey’s imminent security concerns necessitated a more balanced approach. Defensive and coercive foreign policy tools started to assume a more significant place in Turkish foreign policy decision-making. Turkey seemed less prepared in coercive foreign policy, besides the use of military might, and faced more international resistance despite the fact that it was used against DAESH.

The priority of the AK Party era Turkish foreign policy was to diversify its relations in terms of regions/countries and to expand the autonomy of Turkey’s foreign policy. This diversification also tried to strike a balance between economic, political, and security related interests. Turkey tried to resolve its problems with neighboring countries and institutionalize strong political, economic and cultural ties during the AK Party administration until 2013. This diversification effort was not shaped at the expense of any specific third party. This approach also aimed to decrease Turkey’s dependency on its traditional allies in terms of defense and security.

The inclusion of the EU integration process into Turkey’s policy agenda played constructive roles within the political and economic fields. However, with the EU decision to block Turkey’s membership process under the pretext of the Cyprus issue, Turkey turned to improve its ties with other regions, and thus the policy was labeled as an “opening period.”  Turkish foreign policy tried to improve ties with the Middle East, Russia, and African and Latin American countries during this time. Rather than shifting its axis towards other forces, Turkey prioritized the country’s national interests. This policy was frequently criticized by Turkey’s traditional allies as well as by the local affiliates of these allies. Turkey’s allies put pressure on Turkey through rhetoric like “shift of axis,” “Neo-Ottomanism,” “Middle-Easternization,” “Eurasianism,” and “Islamization of Turkey’s foreign policy.”

On the other hand, Turkey adopted an idealist foreign policy vision between 2004 and 2013 with the claim to be an actor that can help to facilitate more collaborative relations around its neighboring region. This policy emphasized an “order instituting” actor role for Turkey. In accordance with this idealist vision, Turkey decided to become a proactive mediator or facilitator for the resolution of numerous regional crises. Regional cooperation and trade opportunities were improved with comprehensive international platforms. These policies were quite effective until the early stages of the Arab Spring. The regional atmosphere was conducive to the implementation of such a constructive agenda. Turkey also paid attention to coordinate its efforts with its Western allies.

The outbreak of the Syrian Civil War and the destabilization of Iraq due to the rise of terror organizations and ethnic and sectarian militia groups radically changed the security environment of Turkey. The country felt the risk of destabilization due to immediate challenges. Terrorist organizations found a suitable environment to spread along Turkey’s southern border. NATO mostly stood still against these changing security trends; only precautions against DAESH were taken. NATO involvement was quite weak and insufficient to provide safeguards for Turkey. Threats posed to Turkey’s security by terror organizations such as the PKK, DHKP-C and FETO, were mostly disregarded.

The lukewarm stance of Turkey’s NATO allies with regard to Turkey’s security challenges resulted in the isolation of Turkey in terms of security and foreign policy. Turkey was left alone in its fight against terror and this strategic choice of Turkey’s “Western allies” was at the same time a strategy to constrain and balance Turkey’s pro-active role in regional politics. Turkey was expected to renounce its proactive role and return back to a traditional defensive role that was designated for it during the Cold War era. Turkey resisted in adapting its regional foreign policy to the traditional defensive model.

Turkey, being surrounded by a mix of violent non-state actors/ terror groups, felt it necessity to deploy its military on the field with Operation Euphrates Shield. Turkey’s active presence intensified its relations with the US, Russia and Iran since mid-2014. However, the attempts to recalibrate the Turkish foreign policy to this new security oriented paradigm started in mid-2016. Turkish foreign policy is switching into a more pragmatic approach. Border security and the struggle against terrorism will be prioritized, yet non-coercive approaches such as humanitarian and development aid, conflict resolution and mediation approaches, trade diplomacy and soft power will continue to be on the agenda.

Reducing dependence on defense industry and expanding and strengthening its network of non-state partners in the regional context are other medium term goals. Having been disappointed by the hostile policies of its traditional allies, Turkey will now emphasize an issue-based balancing strategy. Turkey is experiencing a seesaw pattern and disappointments in its foreign policy are the byproduct of this recalibration effort. Turkey does not refrain from using its hard power against terror elements on both sides of its borders, despite criticism by the US, Russia and other regional actors.

The adoption of pre-emptive security operations on both sides of Turkey’s border was a major shift for Turkey’s security doctrine. Turkey shifted its foreign policy approach along its southern and eastern borders. This shift can be portrayed as a change from pro-active constructive diplomacy to pre-emptive security. This change also has effects on domestic politics and bureaucratic configuration. More nationalist discourses started to dominate multilateralist voices and security diplomacy started to become more central actors to Turkey’s foreign policy making since both the Turkish public and Turkish decision makers are getting increasingly disappointed by the US and EU’s indifference to its security concerns.