Reflections on the Erdogan-Imamoglu Meeting

During the meeting between the two, Erdogan and Imamoglu spoke about the future of Istanbul and the dynamics of the upcoming local elections in a warm and friendly environment. 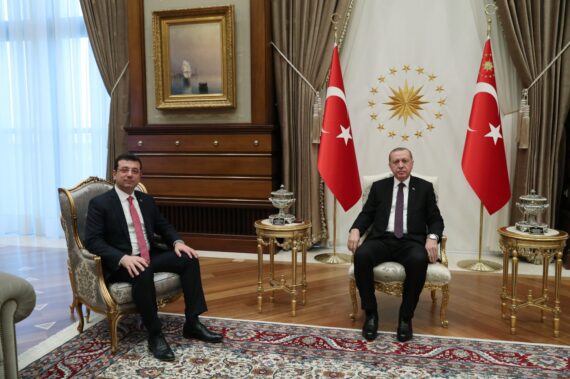 In 2006, Turkey had experienced a surprising moment of political encounter during the 61st General Assembly of the Union of Chambers and Commodity Exchanges Turkey (TOBB). Leaders of the three prominent political parties – Recep Tayyip Erdogan for the AK Party, Deniz Baykal for the CHP, and Mehmet Agar for the DYP – entered the Assembly hand-in-hand together. This moment was an exceptional moment in Turkish politics as political parties had set their differences aside and displayed unity and solidarity. Since tension in domestic politics was high back then, this movement became a symbol of de-escalation.

The second surprising moment of political encounter was the Democracy and Martyrs Rally in Istanbul, Yenikapi, after the failed coup attempt in July 2016. Almost all political leaders had come together at a rally in order to show their respect to Turkey’s sovereignty, independence, and democracy. Indeed, the mood of the moment was beyond politics and it brought a consensus-based approach to politics, which was later called the “Yenikapi Spirit.”

The meeting between President Erdogan and Ekrem Imamoglu was more than political gesture. It was a reflection of consensus and deliberation.

Both of these unforgettable moments of political encounters are highly appreciated by the masses. Since then, political parties have focused more on showing courtesy to each other in their relations. The meeting of President Erdogan and CHP’s presidential candidate, Muharrem Ince, before the June 24 elections, was an example of this courtesy and it decreased tensions in the election process.

Nowadays, Turkey experienced another act of courtesy with the meeting of President Erdogan and the CHP’s mayoral candidate for Istanbul, Ekrem Imamoglu. After the announcement of Imamoglu’s candidacy, he underlined that he wanted to visit President Erdogan in order to hold a respectful and refined election campaign. President Erdogan responded positively to Imamoglu’s demand by emphasizing that his door was open to everyone. During the meeting between the two, Erdogan and Imamoglu spoke about the future of Istanbul and the dynamics of the upcoming local elections in a warm and friendly environment.

During the meeting between President Erdogan and CHP’s mayoral candidate, Ekrem Imamoglu, the two spoke about the future of Istanbul and the dynamics of the upcoming local elections in a warm and friendly environment.

Even if these acts are seen as symbolic gestures most of the time, they are also crucial for creating a welcoming election atmosphere for the voters. Indeed, it is a well-known fact that the following days in the election process will raise tensions for both candidates and voters. Therefore, these kinds of fresh starts increase people’s trust in political leaders and parties.

However, it is also necessary to get supporters of leaders in the process to maintain this peaceful environment. In Imamoglu’s case, it is difficult to say that the support of leadership is provided. The chairman of the CHP, Kilicdaroglu, still does not accept the legitimacy of President Erdogan – even though he received 52% of the votes in the previous elections. The campaign of “Not My President” is still being circulated by pro-CHP social media accounts. This attitude proves that the core of the party’s election campaign will be based on Kilicdaroglu’s anti-Erdogan approach and the peaceful environment won’t last for too long.

After the announcement of the rest of the candidates, rivalry among the political parties will gain momentum and realpolitik dynamics will be more dominant. In any case, the meeting of President Erdogan and Imamoglu played a role in politics beyond being a symbolic gesture.