Reign of Terror in Northern Syria: Displacement Routine by the PYD

The PYD, under U.S. military and diplomatic protection, has committed vast human rights violations ranging from arming children to training them in terror camps. 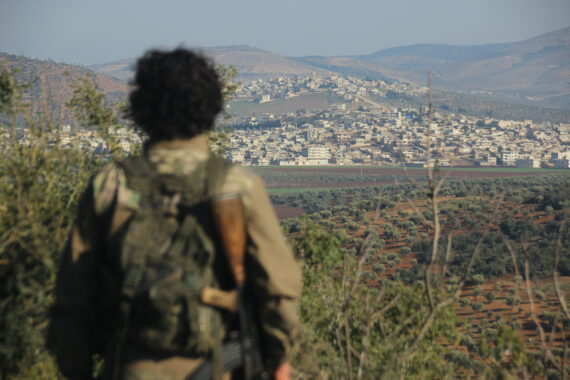 The PKK’s Syrian branch, the Democratic Union Party (Partiya Yekîtiya Demokrat, PYD) has been elevated to the status of a major political actor just across the Turkish border. The organization had remained a low level one since its formation in 2003 by the PKK until the Syrian Civil War, which began in 2011. Its rise and spread has paralleled the rise and spread of the war in Syria with a short lag. The PYD developed a tacit mutual understanding with the Syrian regime forces and despite sporadical small scale clashes between them, the two parties tolerated each other as they prepared for a military encounter with the rebel forces. The growth of Daesh in Syria threatened both sides but it also created an opportunity for the illicit partnership of the regime and the PYD. As Daesh grew stronger in Syria, it militarily suppressed other rebel forces and became a “useful” enemy for both the regime and the PYD, as they depicted themselves as the only alternative to a future Syria ruled by Daesh brutality. Eventually Daesh was defeated and lost its strongholds on many fronts against Russia and Iran-backed regime forces, Turkey-backed Free Syrian Army and the U.S.-backed PYD.

While the PYD first expanded its territory with the withdrawal of regime forces starting from 2012, it gained further pockets of land with the erosion of Daesh control. As Daesh was losing ground, the PYD exponentially increased the amount of territory under its control. The organization happened to rule hundreds of thousands in four self-declared cantons: Cizire (Jazira or Al-Haseke), Euphrates (formerly Kobani or Ain al-Arab), Shahba (which is only partly under the PYD control) and Afrin. As Daesh lost its self-declared capital to the U.S.-backed YPG forces with interesting twists, now major cities and districts such as Raqqa, Manbij, Haseke, Kobani, Qamisli, Afrin, Tel Abyad, Tel Rifaat, are all fully or partially under the control of the PYD. Nevertheless, such a speedy expansion in land and resources was not a smooth process – it not only relied on U.S. military and diplomatic support but also on U.S. toleration of vast human rights violations, including ethnic cleansing via forced mass displacements.

In the summer of 2015, 15 Syrian rebel groups accused the PYD of deliberately displacing thousands of Arabs and Turkmens. A year later the Human Rights Watch (HRW) reported serious human rights abuses committed by the PYD, including torture in custody, which in some cases led to the death of the detained. Considering the fact that the HRW could only visit a limited area (only Jazira canton for the aforementioned report) due to security concerns, it begs further questions for areas where the PYD’s rule was and still is more contested and more controversial.

In an earlier account, the British daily newspaper, the Times, reported that “thousands of civilians have fled their homes in northern Syria as Kurdish forces carry out what appears to be a campaign of ethnic cleansing against Sunni Arabs.” The report refers to the PYD as “Kurdish forces” and this is problematic as the organization also has a reputation for suppressing any Kurdish organization that falls apart from the PKK’s pre-determined lines. The formerly mentioned HRW report indicated that not only non-Kurds but that Kurdish opposition members have also been “convicted in apparently unfair trials” by the PYD. This is no surprise to observers who already know that the PYD left no political network other than its own by targeting Iraq’s Kurdistan Democratic Party affiliates (i.e., the Kurdish National Council, KNC) in Syria.

The cases of vast human rights abuses committed by the PYD, specifically forced displacements, are not limited with the findings of HRW. In its report ‘US ally’s razing of villages amounts to war crimes,’ Amnesty International stated that by deliberately demolishing civilian homes, in some cases razing and burning entire villages, displacing their inhabitants with no justifiable military grounds, the Autonomous Administration [the PYD] is abusing its authority and brazenly flouting international humanitarian law, in attacks that amount to war crimes.” In order to reach this conclusion, Amnesty International did not only talk to locals but also used satellite images to see the full scale of the demolition, which showed almost entirely demolished villages.

As people escape from the brutality of war in order to keep their beloved ones in a safe distance, the incoming groups that fill the vacuum usually take advantage of such situations. As Syria Direct reported based on the statements of “Kurdish activists, residents and a police officer from Qamishli in northern Al-Hasakah,” according to the conscription regulations of the PYD, “real estate and other property belonging to residents who have fled the canton will be held by self-administration authorities, with any income, such as rent, generated by the holdings going to “develop the society.”” The same report, based on witness accounts, highlights the pattern of confiscation even for those who have not fled yet. As expressed by a witness, “At first, [the PYD’s Asayish branch] offered to rent the residence, but we refused,” then “they asked to buy it” but when the owners refused again, “The third time, they confiscated our [the owners’] apartment.” It is unfortunate that UN reports under-stress such immense human rights abuses by simply describing them as “some reports alleging forced displacements” and rationalizing the implementations that “reportedly looted houses belonging to Arab villagers” with references to the war conditions.

The PYD, under U.S. military and diplomatic protection, has committed vast human rights violations ranging from arming children to training them in terror camps. As of today, the entire PYD-controlled areas are full of PKK leader Ocalan’s posters along with dead suicide bombers who are called “heroes.” It is unfortunate that the PYD is cheered within international circles for its alleged “liberal values,” while in fact its school books are full of the jailed leader of an internationally recognized terrorist organization (see link for a sample textbook and witness accounts). It is also unfortunate that the very same totalitarian structure is celebrated for holding elections, which do not allow opposition parties to compete by torturing their members or arresting its leader. Despite the given double standards to the unconditional U.S. support for the PYD, and despite the politically guided one-sided media coverage of it, some reports could come out to show what lies beneath the mask. Nevertheless, these reports and accounts are just a drop in the bucket and more effort is needed to grasp the real reign on terror in northern Syria, not only for the displaced non-Kurdish people, but also, and especially, for Kurdish residents being forcefully conscribed to the ranks of the organization in their childhood.