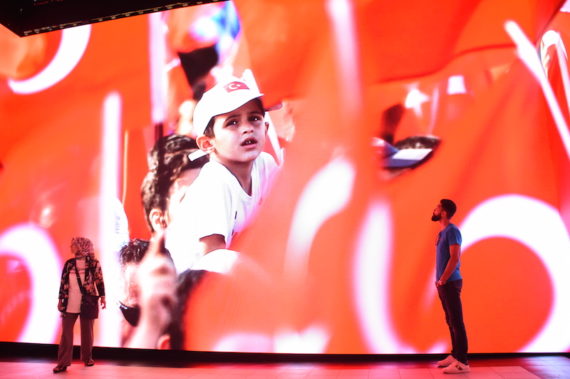 Visitors arrive at the 'July 15 People's Victory Digital Display Centre' made by Turkish Presidency Directorate of Communications, set at Taksim Square within the July 15 Democracy and National Unity Day, in Istanbul, Turkey on July 15, 2019. AA

Three years ago, the Fetullah Terrorist Organization (FETO) initiated a coup attempt in Turkey to overthrow the government and seize power. People poured to the streets to defend Turkish democracy against the coup plotters. 251 people were killed and over 2,000 were injured.

After the failed coup attempt, Turkey faced some serious problems. The first was the issue of cleansing state institutions in the fight against FETO. In accordance with this aim, comprehensive investigations were conducted in every state institution in order to identify people affiliated with FETO. Until today, approximately 120,000 people have been dismissed from state institutions. Nonetheless, after in-depth investigations, some of them managed to return to their jobs. This problem became one of the most difficult and complicated issues in the aftermath of the coup attempt.

Until today, approximately 120,000 people have been dismissed from their positions in state institutions due to their affiliation with FETO, which orchestrated the July 15 failed coup.

The second critical problem was related to the legal procedure in the post-coup period. Since many high-rank officials in the military were directly involved in the coup attempt, there was a need of holding fair trials in order to punish the coup plotters. 263 out of 289 trials have now been completed. Nevertheless, the whole judicial process will be completed after the applications of higher courts – the Constitutional Court and the European Court of Human Rights (ECHR). Due to this reason, it is possible for the whole judicial process to last almost 10 years.

The third problem was related to the fight against FETO in the international arena. While the national struggle against FETO requires mostly short-term strategies, there is a need of long-term strategies on an international level. While FETO had been infiltrating state institutions since the 1970s, it had also been organizing abroad. FETO had approximately 800 schools and over 1,000 foundations in 160 countries. After the coup attempt, Turkey made official applications to end FETO activities in these countries. In total, 22 countries, including Russia, Jordan, and Serbia, closed FETO-affiliated schools and NGOs after responding positively to Turkey’s official application. However, FETO maintains its activities in numerous countries. Thus, Turkey needs a better long-term strategy and back-channel diplomacy to deal with this issue.

In total, 22 countries, including Russia, Jordan, and Serbia, have closed FETO-affiliated schools and NGOs after responding positively to Turkey’s official application.

All these problems illustrate that Turkey has shown success in dealing with FETO after the July 15 coup attempt. Compared to other countries after such experiences, Turkish democracy still functions, and judicial independence has not been deteriorated. Nonetheless, it is also obvious that there is still a lot of work to be done in the fight against FETO. Turkey especially needs a renewed perspective in the fight on an international level. At this stage, it is crucial to find a sophisticated way of explaining how FETO is not only a serious problem for Turkey but is also of critical danger for other countries. Since the international audience is not aware of the FETO issue, it is a necessity to find a new discourse in order to establish this awareness. This responsibility falls on the government, universities, and NGOs.