Reza Zarrab to stand as witness in US case

Victor Rocco asked the jury, "What would you do if US prosecutors made voice recordings and gave them to another country without the permission of the government, and then they were used as evidence?" 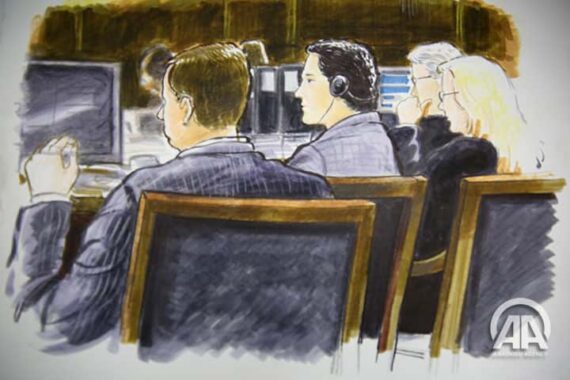 According to the US federal prosecutor’s statement, Turkish businessman Reza Zarrab will take the witness stand in the trial of Mehmet Hakan Atilla, deputy general manager of Turkey’s Halkbank.

The hearing began on Tuesday after US District Judge Richard Berman rejected a request by Atilla’s lawyers for a two-week delay.

Officials from the prosecutor’s office said Zarrab accepted the six charges he is accused of, adding “he would testify as a witness in court.”

The prosecutor’s office directed all charges Zarrab is accused of to Atilla and defended voice recordings it had submitted to the court as evidence and refused to reveal their source.

David Denton, the deputy prosecuting attorney, said the FETO-linked police who made the recordings did their job and would also testify as witnesses.

Victor Rocco, Atilla’s lawyer, rejected the charges his client is accused of, saying “Atilla was one of the victims of Zarrab,” adding that “Zarrab and Atilla rarely got in touch and didn’t like each other” while also criticizing the voice recordings.

He asked the jury: “What would you do if US prosecutors made voice recordings and gave them to another country without the permission of the government, and then they were used as evidence?”

The names of the prosecution’s witnesses were also announced during the hearing.

Zarrab was expected to testify on Tuesday but didn’t appear before the jury as the testimonies and cross examination of the first three witnesses took a long time.

Sidhardha Kamaraju, an official from the prosecutor’s office, said the testimony process was expected to take three days and that Zarrab, who would be taken from his cell, would begin testifying on the second day of the hearing.

FBI Special Agent James Atwater, the first witness of the prosecution to be listened in court today, answered questions regarding Zarrab being taken into custody at JFK Airport and later being remanded.

Lisa Palluconi, a sanctions coordinator on Iran in the Foreign Assets Control Office of the US Treasury Department, gave information about US sanctions on Iran’s financial and banking system as the prosecution’s second witness.

Mark Dubowitz, who works at the Foundation for Defense of Democracies, as an expert witness on Iran’s economy, petroleum and natural gas sector amid US sanctions has also spoken.

Zarrab was detained last year on charges of violating sanctions against Iran, while Atilla was arrested in the US earlier this year on similar sanctions violations charges.

Turkey recently launched a probe against US prosecutors connected to the Zarrab case where Istanbul prosecutors accused former US Attorney for the southern district of New York Preet Bharara and Joon H. Kim, the district’s current acting attorney, of using illegally obtained information and documents from previous investigations in Turkey for an ongoing case in the US.

Bharara, who launched the probe into Sarraf, was fired on March 11 as part of a mass Trump administration expulsion of holdover US attorneys.