R.I.P. Julian Assange: The Annoying Australian Will Be Quite a Catch for Trump

But we have never needed Wikileaks and investigative journalists more than today and his arrest signals the beginning of a new Orwellian age. 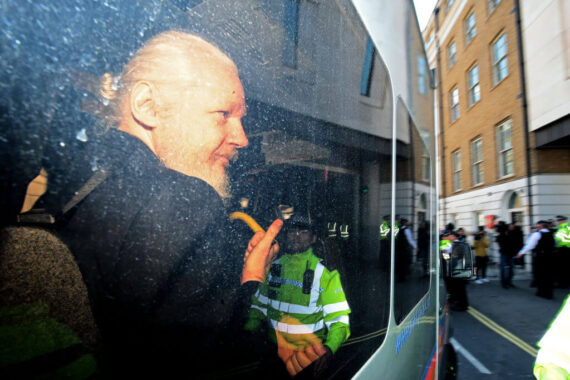 Julian Assange gestures to the media from a police vehicle on his arrival at Westminster Magistrates court on April 11, 2019 in London, England. Getty Images

Although the news of Julian Assange’s arrest shocked the entire world, it really shouldn’t have come as a surprise. The writing was on the wall for quite some time. But what have we learnt from it, what is really driving it and should we be concerned about its implications towards press freedom – not only in the west but around the world?

Cynical hacks in the press room, long in tooth, always grumbled that it was only a matter of time before America punished Assange for the incendiary trove of highly sensitive intelligence which compromised the safety of U.S. forces around the world – which he did, with the aid of Chelsea Manning who was jailed in 2010 for being the source of that material.

The case of Manning/Assange is a divisive one. Whistleblowers in the military cannot be judged through the same prism as say, public sector workers or those in the corporate world as no matter how noble their campaign, their actions costs lives. And we should never forget that.

And whistleblowers too are seldom entirely innocent and want to do good, as many claim. In most cases there is an agenda, an axe to grind or a score to settle or even mental health problems which plague them and one could say that both Assange and Manning are socially dysfunctional individuals who want to bring about revolutions and have their names immortalized in the annals of history for ever.

And that’s why we need journalists. We also need whistleblower platforms like Wikileaks – which I believe will be even more successful than ever now that Assange is to undoubtedly face a long jail sentence in the U.S. – but the responsibility on editors and journalists to examine, vet and authenticate the material which is leaked to such sites has never been more critical.

Journalism, as we knew it – and certainly investigative journalism, is more or less dead in the western world.

But media is dying, as is the craft of journalism. Battling against a tide which financially becomes more illogical by the day to counter, it is also a profession which is becoming ‘amateurized’ by a new generation of journalists who haven’t the experience, skills or judgment to be the guardians of such material to process. And governments both in the developed world and in poorer countries are waking up to this reality and slaying the lifeless body of journalism even more with their final feral stabs to the heart of this profession.

Journalism, as we knew it – and certainly investigative journalism, is more or less dead in the western world and its demise is linked to the arrest of Assange, which should worry not only Alan Rusbridger, the veteran editor of The Guardian – but all of us who care about democracy. Curiously, the Guardian is the newspaper in the U.K. which was “tipped” by Britain’s security services about one of Trump’s aides visiting Assange at the Ecuadorian embassy, which turned out to be fake news and is now a subject of a legal case which will cost the U.K. broadsheet dearly.

It is interesting to note that Assange was originally netted by allegations of sexual misconduct in Sweden – although we should note that there is no real case against him and at this stage merely allegations. We should be cynical about such allegations. Western intelligence agencies since the birth of Britain’s MI6 have been compromising their enemies with ‘honey traps’ and Assange’s ‘case’ in Sweden has a faint whiff about it which doesn’t add up. Make no mistake. For the Americans and for the British, their client state surfs in the intelligence world, there has never been in the entire U.S. history a greater intelligence or military compromise than the Wikileaks files which Manning instigated. And for this reason, Assange could be considered an enemy more or less like Bin Laden. Indeed, Mike Pompeo once called Wikileaks a “non state hostile intelligence service” when he was CIA chief, and despite Trump’s hilarious claims that he doesn’t know anything about the website, the U.S. president supports the witch hunt and the ethos behind it – probably as he knows that when his own enemies, or even the Russians, are ready to feed into it damaging material against him, it could make or break him, politically and financially. Trump wants to send a message to all media operators – journalists, website owners, social media giants – that “you had your fun. Now the crackdown starts.”

But there’s too much about it which stinks.

Let’s never forget that it was the rape allegation case in Sweden, which was the silver bullet which forced him to seek ‘sanctuary’ in the UK in the first place and to use Britain – a country he no doubt naively thought was advanced in the area of human rights – as a legal base to defend himself. Assange probably didn’t realize that the UK government has, for some time now, been introducing increasingly draconian laws which actually prohibit free speech and restrict journalists’ abilities to work, making it probably the worst western country to flee to, given that you’re Washington’s biggest enemy.

Assange lost his appeal in 2012 for extradition to Sweden leading him to seek asylum in the Ecuadorian embassy in London, which served a purpose at least until that country’s new leader, elected in May 2017, took a dislike to the Australian guest at his London home – perhaps due to Wikileaks leaking damaging information against the new President.

And so with this move, both the U.S. and the UK prove that their persecution of Assange is not about shooting the messenger, but more about decapitating his nerdy cousin. Assange is not even a journalist, but more of an eccentric publisher and revolutionary web geek who believes freedom of speech has no boundaries. The speak-your-weight machine opprobrium from UK government ministers is shameful but indicative of just how far Britain has sunk as a nation once a champion of freedom of speech but has now become a West African tin pot dictatorship whose leader considers the profession of journalism as a crime and the raw commodity of truth a derivative of Ebola, which needs to be quarantined and destroyed.

Free speech in the UK is more or less a corpse now in a coffin which Theresa May and Donald Trump have both banged the last two nails into with the Assange case.

Trump will no doubt make sure that he is extradited to the U.S. where he will almost certainly serve the rest of his life in a maximum security prison as he is a threat to the U.S. president, hated by the democrats due to the Hillary emails leak and is believed erroneously to be a Russian “stooge.” He is a real catch for Trump who wants to show the media that he can destroy any one of them, as individuals, if they cross a line and actually do a good job as journalists and report the truth. The Assange case will be interesting as those compliant with making Wikileaks relevant – journalists themselves who use the leaked material – remain untouched, while the website nerd who set the technology up so that whistleblowers could send them the material, will soon don the orange jumpsuit.

British journalists love to mock their U.S. counterparts who have done such a pathetic job at holding Trump to account. But free speech in the UK is more or less a corpse now in a coffin which Theresa May and Donald Trump have both banged the last two nails into with the Assange case. I don’t personally like Assange. His narcissism troubles me. But if we can remember that good journalists are always difficult to work with and invariably arrogant and that Wikileaks is an information share platform, which is needed more than ever, we should all forget his personality quirks and remember Thursday April 11th 2019 as a day when the West plunged its dagger into the lifeless body of journalism once and for all.

We have never lived before in a period where the advancement of the internet has produced a new generation of sloppy copy-n-paste ‘churn-a-lists’ who are so ignorant of the craft that they can’t even see the importance and relevance of whistleblowers, fact checking and how their freedom provides the basis of what democracy itself stands for. And we have never lived before in a period where the state has taken advantage of technology to spy on us and to cleverly pass draconian laws through which deny journalists the very tools they need to access the ugly truth which we must always probe and expose. Assange understood that time was running out for the fourth estate. The genius of Assange was not the platform that he and his geeky friends built but the fact that he saw that journalism was dying at an alarming rate. He was ahead of us all.