Rising tension over assassination of ex-spy in Britain

Sergei Skripal was a retired Russian military intelligence colonel. He was arrested in 2004 and sentenced to 13 years in prison for espionage. In 2006, he was convicted for giving identities of Russian secret agents in Europe. He was alleged of spying for the U.K.’s MI6 since 1995. 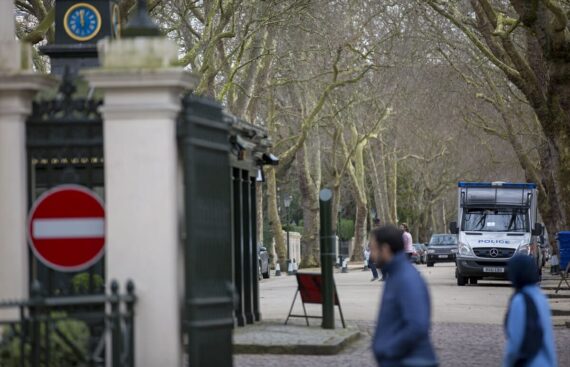 A Mercedes-Benz Sprinter police van is seen parked at the Russian Embassy in London after the U.K. government expelled 23 Russian diplomats in a standoff with Russia over the assassination of former spy Sergei Skripal on March 14, 2018. Anadolu Agency

PM Theresa May stated that police identified the poison as a “military-grade nerve agent of a type developed by Russia.” May told the House of Commons that it is “highly likely” that Russia is behind the poison attack.

Now, tension between the two states has been rising. On last Wednesday, March 14, PM May announced that the UK expelled 23 Russian diplomats “who have been identified as undeclared intelligence officers.” On March 20, these diplomats left London with a Russian plane. This has been the biggest expulsion in 30 years.

The U.K. suspended the planned high-level contact with Russia and announced that any Russian asset, wherever any evidence is found about any threat to U.K. nationals and residents, will be frozen.

The Russian administration has denied all accusations and claimed that the U.K. is “playing politics.” In a statement made, the Russian Foreign Ministry labeled the allegations made by May “insane.”

One of the developers of the A-234 poison, which was used for the assassination attempt of Skipral, told Sputnik that Russian experts are able to determine that the poison was not manufactured in Russia, referring to the fact that the U.K. has rejected to giving a sample substance.

Sergei Skripal was a retired Russian military intelligence colonel. He was arrested in 2004 and sentenced to 13 years in prison for espionage. In 2006, he was convicted for giving identities of Russian secret agents in Europe. He was alleged of spying for the U.K.’s MI6 since 1995.

In 2010, he was released with three others during a spy swap between the U.S. and Russia in exchange of ten spies who were to be released by the U.S. Then, Skripal was given refuge in the U.K.

Prior to the assassination attempt of Skripal, the assassination of Alexander Litvinenko who was a former KGB agent created tension between London and Moscow. While he was at a hotel in London in 2006, he took tea with two other former agents; Andrei Lugovoi and Dmitri Kovtun. Polonium-210 was found in a teapot. Two former agents, who now live in Russia, have been the prime suspects.

Skripal’s and Litvinenko’s assassinations are not the only ones. In the last years, the poising of former Ukranian President Viktor Yushchenko in 2004 or a prominent character of “democratic opposition” as he was called in an interview, Vladimir Kara-Murza, both survived assassination attempts that have been allegedly linked to Russia.

Vladimir Yermakov, head of the non-proliferation and arms control department at the Russian Defense Ministry stated that Russia destroyed all chemical weapons in its arsenal and OPCW (Organisation for the Prohibition of Chemical Weapons) verified.

Both Skripal and the condition of his daughter remains critical. While the precise effect of the poison in the long-term is still unclear, it is predicted that both will suffer from life-long brain damage.

From mutual claims and political moves, it seems time is needed for the truths about the attack to come to light and defuse tension between London and Moscow.