Saudi Arabia and Iran are regarded as two major actors who are in constant competition in the Middle East. The tensions have initially arisen due to different interpretations of schools of Islam. 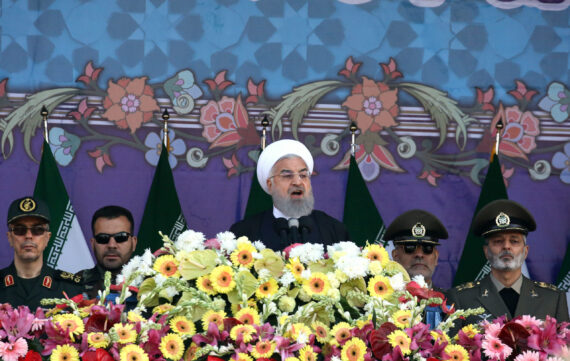 President of Iran, Hassan Rouhani (C) speaks during a ceremony marking the National Army Day in front of the Mausoleum of Ayatollah Khomeini in Tehran, Iran on April 18, 2018. Anadolu Agency

Some regional and global actors have recently targeted Iran. The United States, Israel and Saudi Arabia are the leading countries that see Iran as a major threat to stability in the Middle East. This tripartite coalition has recently increased their dissatisfaction with the Iranian regime. There are a number of signs as to how these three countries have intensified their criticism in a synchronized manner against Iran over the last few months. In order to observe the traces of this initiative more clearly, it is necessary to mention some recent developments.

Saudi Arabia and Iran are regarded as two major actors who are in constant competition in the Middle East. The tensions have initially arisen due to different interpretations of schools of Islam. While Saudi Arabia embraced a Wahhabi worldview, Iran has traditionally been a power-base of Shiism. The differences between the two countries deepened with the start of the Arab revolutions in 2011. This situation became especially evident in the Syrian and Yemeni policies. While Iran supported the Assad administration at any cost, Saudi Arabia transferred great amount of weapons and equipment to anti-Assad forces.

The second front of this confrontation was Yemen. While Iranian backed Houthis was quite successful in their campaign for power in the country, Saudi Arabia supported the internationally recognized government of Yemen led by Mansour Hadi. During the past three years, the main aim of Saudi Arabia was to prevent Iranian expansion into Yemen and other countries in the region such as Lebanon, Iraq and Syria. An Iranian influence in Yemen would have direct consequences for Saudi Arabia so the Riyadh administration was very keen on keeping Iran out of Yemen.

Saudi Arabia’s policy towards Iran became tougher with Trump’s election as president of the U.S. With the strong support from the Trump administration, Saudi Arabia increased its tone of its criticism against Tehran. This support became more visible when Crown Prince Mohammad bin Salman visited the U.S. for a three-week journey. Iran was at the top of the agenda during the meeting between bin Salman and Trump. Bin Selman supported Trump’s comments in which he stated that the U.S. would withdraw from the nuclear deal with Iran. In an interview with the U.S. media, bin Salman threatened the Iranian leadership and made a comparison between Ayatollah Khamenei and Adolf Hitler.

Another country that increased its criticism against Iran is the U.S. This was expected when the new U.S. President Donald Trump came to power in early 2017. Trump announced that he would take a sharper position than Barack Obama on Iran. Following his inauguration, Trump suggested that the U.S. must withdraw from the nuclear deal with Iran. He argued that the nuclear deal with Iran was unacceptable. Trump stated that Iran did not fulfill its obligations and that the U.S. has the opportunity to return from the mistake of the Obama administration.

Another factor in the hardening U.S. position against Iran is Israel. Trump also considered Iran as a direct threat to its most strategic ally in the region, Israel. Trump showed their strategic partnership with Israel when he announced that Washington recognized Jerusalem as the capital of Israel. He also suggested that the U.S. embassy in the country should be transferred to Jerusalem. The two strategic partners, U.S. President Trump and Israeli Prime Minister Netanyahu made two phone calls on the policies to be implemented against Iran in April 2018, while the two leaders emphasized that Tehran would act jointly to end its activities in the region.

One of the most important players of this global alliance against Iran is Israel. Despite its discomfort with Iran’s policies, Israel was cautious about directly engaging with Iran in any conflict area. Israel has conducted its campaign against Iran indirectly. Tel-Aviv has recently intensified its criticism against Iran, particularly since February 2018. Israel’s policy against Iran changed dramatically when an Iranian drone entered Israeli airspace. Following the incident, Israeli forces targeted Iranian-backed bases in Syria. In one of the most recent cases, Israeli planes bombed military bases near Hama and Aleppo and killed 26 Iranian fighters.

As the tension between the two countries increased, the Israeli government held an extraordinary cabinet meeting at least twice, taking the possible scenarios against Iran onto the agenda. Israeli Prime Minister Benjamin Netanyahu, who attended the Munich Security Conference in February, argued that Iran is “the greatest threat to the world.” In a recent press release Netanyahu himself claimed that despite the nuclear deal, Tehran lied to the world and continued to work for obtaining nuclear weapons. Finally, Israel has two strong supporters, the U.S. and Saudi Arabia, in its campaign against Iran.

On the Iranian side, Tehran has been increasingly feeling the social and economic effects of the support in Syria and Yemen. Therefore, Iranians are not ready for a confrontation with such an alliance that includes regional and global players. Given that the regional conjuncture is at a time when it has never before been possible, it can be expected that these countries will intensify their policies against Tehran. However, such an action would directly affect regional actors such as Turkey and Russia. Therefore, Ankara and Moscow have the responsibility to work for a calmer solution of the rising tensions between the mentioned parties.