The leader of the Bangladesh National Human Rights Commission, Kazi Reazul Hoque, has called for Myanmar to face the UN court for crimes against humanity. 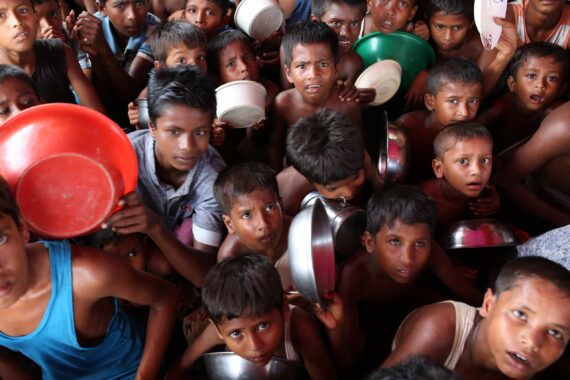 The crimes committed against the Rohingya Muslims by Myanmar state security personnel and Buddhist mobs have re-emerged on the political agenda as an estimated 400,000 refugees escape violence and seek asylum in Bangladesh.

Crimes against the Rohingya include murder, looting homes and torture. According to Bangladeshi Foreign Minister Abul Hasan Mahmood Ali, around 3,000 Rohingya have been killed in the crackdown.

Latest developments pushed the UN into suggesting that the Myanmar treatment of Rohingya looks like “textbook ethnic cleansing.”

Speaking at the launch of the Burma Human Rights Network’s report on persecution of Rohingya Muslims, executive director Kyaw Yin suggested that the Rohingya crisis in Myanmar should be perceived as a humanitarian issue rather than a religious one.

Yin warned that the ongoing humanitarian crisis in Myanmar could possibly trigger greater influence of extremism among victims.

He told the forum that “the actions by the Rohingya people by joining extremist groups could undo all the work that the international community has put in to advocate for their plight.”

In addition to Kyaw Yin, speaking at the same forum, Association of Southeast Nations (ASEAN) Intergovernmental Commission on Human Rights’ Malaysian Chairman Edmund Bon told the audience that the international community was still hopeful about the ASEAN in resolving the crisis in Myanmar.

He mentioned that the “Malaysian and international community still have hope on the ASEAN to step in and resolve the crisis. ASEAN has used its dialogue and diplomatic ties to ease many tensions around the world, and it would be unjust for them not to step in a crisis which happens at home.”

The Chairman also added that the government of Malaysia had engaged with Myanmar on multiple occasions before the crisis emerged on the international platform, adding that however, bilateral diplomacy had “certain limits.”

While hosting up to 400,000 Rohingya refugees, the Bangladesh National Human Rights Commission (NHRC) called on the international community to take the government of Myanmar to the UN Court of Justice for committing crimes against humanity in Rakhine state.

He also urged for the UN Human Rights Commission and the international community to “mobilize political pressure on Myanmar’s government to find a durable solution” to the Rohingya crisis.

“The durable solution must include the right to return to their homelands in a safe, secure and dignified way,” Hoque added.

“All fundamental rights of the Rohingya should be respected in the process of resolving the current crisis.”

Hoque led a four-member delegation on an emergency fact-finding mission between September 9 and 11 and interviewed several Rohingya refugees currently in Bangladesh. The statements of the refugees, including stories of torture, rape and murder account to “extreme violation of human rights” and are “crimes against humanity” he mentioned.

Turkey continues to aid the Rohingya

Whilst the Turkish Cooperation and Coordination Agency (TIKA) has maintained the lead in providing humanitarian assistance to the Rohingya living on camps in Bangladesh, Turkey-based Humanitarian Relief Foundation (IHH) said on Tuesday that it has delivered emergency food aid to 3,125 Rohingya Muslims in Rakhine State.

A press release by IHH informed that the aid was distributed on Monday and Tuesday to the villages of Depaing Thingying Bali, Dapaing South Bali IDP and camps near the Sittwe Township of southern Rakhine State.

The emergency food aid consisted of rice, oil, chickpeas, salt and pepper, and reportedly should be enough for one month.