In the last five years Russia has been a keen supporter of Bashar Assad and eventually, decided to intervene militarily in Syria and as it claimed to fight terrorism and takfirist groups. But why did the Kremlin actually intervene? What is the truth about its intentions? And most importantly, how should we read this intervention? 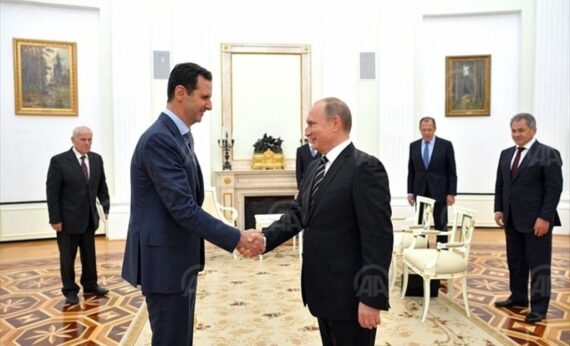 The Syrian crisis is in its fifth year and there is still no workable solution in sight. On the contrary the recent developments especially the Russian military involvement in support of the Assad regime will only escalate the gravity of the situation.

From the outset, Russia, along with China and Iran, sided with the Assad regime. Yet, the alliance has a relatively long history. It dates back to the beginning of the 1960s when the socialist secular Ba’ath party took over power in Syria (1963). Russians opened a military base in Tartus, on the coast of the Mediterranean Sea. This collaboration hit its peak after the death of Jamal Abdel Nasser, with his successors leaping into the arms of the USA. In the 1970s, Hafez Assad as a “secular Baathist,” after taking power in Syria, searched for a cover for his sectarian rule and legitimized it by lending his support to the Palestinian cause. Hafez Assad started to fight against the USA, Israel’s main sponsor, and thus befriended Russia, the enemy of imperialism and supporter of the “struggle of people.” Russians continued to support Hafez for years in various fields: military, economic – the Euphrates dam project for instance – and in many scientific missions. Syrian political propaganda about steadfastness and confrontation always included the readiness of Moscow to build an air defence bridge in case of a war with Israel.

Relations started to weaken in 1986, during the Perestroïka years, when the issue of the Syrian debt to Moscow (13.4 billion USD) was highlighted. Having problems with Russians, Hafez Assad turned to the USA and adopted a more friendly approach towards it. Assad’s troops participated to the international coalition led by the United States during the Second Gulf War against his old enemy, the Baathist Saddam Hussein. In time, relations between Russia and Syria strengthened again starting in 2001 when Russia wrote off the parts of the Syrian debt and lowered it to 3.6 billion USD; the pace of rapprochement and cooperation has been increasing since.

In the last five years Russia has been a keen supporter of Bashar Assad and eventually, decided to intervene militarily in Syria and as it claimed to fight terrorism and takfirist groups. But why did the Kremlin actually intervene? What is the truth about its intentions? And most importantly, how should we read this intervention?

It is clear that the USA’s role as sole superpower after the collapse of the Soviet Union has been seriously challenged with Putin’s coming to power. It is also clear that Putin, with his upbringing and military intelligence mentality, wants to restore Russia’s old glory and perhaps even fulfill the country’s most important strategic dream of gaining a foothold in the Mediterranean Sea.

Such an ecclesiastic welcoming by the Russian Orthodox Church will fuel religious sentiments and can create an explosive ground reaction  and resistance in Muslim streets. Confirming this understanding, the first heralds of what will follow came in the Islamic fatwas released by Saudi Arabian religious authorities to fight Russians in Syria

First, there is no doubt that the Russian intervention in Syria is a wrong decision. Putin was and is still supporting Assad, in his war against his own people. Yet the error does not lie in this only – at the end of the day nobody cares about civilians. The error is that Russia will probably sink in the Syrian quagmire just as the United States sank in Iraq, and the elimination of “extremist takfiris groups” will take a very long time. Russia doesn’t seem disturbed by this factor, as it announced lately the expansion of its military base in Latakia to accommodate 200 additional aircrafts, as well as the expansion of the port of Latakiato, a harbor which can host an aircraft carrier and more than 12 battleships. It thus becomes clear that the Russians have come to stay and that they have tied up their survival in the region with Assad’s survival.

It wouldn’t be irrelevant to say that Russian intervention will turn the war more destructive, more destabilizing and more catastrophic for everybody with higher levels of damage and losses. Due to the Russian viewpoint on military action and its definition of success for military campaigns – Russian intervention in Chechnya is the best example- this intervention will force more Syrians to flee from conflict areas, meaning more refugees knocking on Europe’s doors. Furthermore, it gives Assad more power and strength to continue his political actions and course.

One of the most prominent manifestations of destabilizing the relative stability of the region was Turkey’s harsh response to the Russian aircraft violation of its airspace. It is known that the United States and Russia have reached a memorandum of understanding regarding flying over Syrian skies and that Israelis guaranteed the safety of their skies during Netanyahu’s visit to Moscow only a day after the Russians declared their intentions to conduct air strikes in Syria. Yet due to the fact that NATO has long borders with Syria and with the “Islamic State” (via Turkey) the possibility of an accident between the two powers remains as a threat to global security for the indefinite future.

On the other hand, Russian intervention will increase the indignation among Arab countries, particularly the ones who were and still are continuing to support the revolution of Syrian people against Assad and insist on his departure as a precondition for negotiations to build the Syria of tomorrow. It is possible that Saudi Arabia may become keener to supply Syrian opposition with more money and weapons to reinforce its statute and strengthen its position vis-à-vis the Russian-Iranian Shiite alliance with which Saudi Arabia is in open war on the Yemen front.

Moreover, to Muslim discontent Russia is no longer a communist atheist state, but a growing Christian power. Communist Russia was never really welcomed in the Muslim world and will not be welcomed now as it debuts its military intervention in an Arab Muslim country from a religious standpoint. The Russian Orthodox Church has blessed the military intervention, calling it a “holy war.” Such an ecclesiastic welcoming by the Russian Orthodox Church will fuel religious sentiments and can create an explosive ground reaction  and resistance in Muslim streets. Confirming this understanding, the first heralds of what will follow came in the Islamic fatwas released by Saudi Arabian religious authorities to fight Russians in Syria. Sunni Islamic extremism will inevitably be pushed further, an extremism that has become the focus of the Russian Christian-Iranian Shiite-Assad axis. Again, this will not result in anything but more extremism and more bloodshed.

The sad reality is that the Russian mistakes of today are only paid for by unarmed Syrian civilians who have seen their country torn to pieces by war for the last five years.

By intervening in Syria Russia has stopped any incentive for dialogue between parties. The rebels have declared their rejection of the United Nations’ mediation which they had previously accepted. The Assad regime, on the other hand, never displayed any real intentions to partake in dialogue and does not seem to hesitate in escalating the destruction of the country in order to keep its position.

It is evident that after the launching of bombings on the “terrorists,” Russia seems to desire to deprive the West of any partnership in a future political solution, by targeting not only ISIS troops, but also striking the moderate factions close to Washington, and all the forces opposed to the Assad regime. Russian aircrafts are reportedly avoiding bombing ISIS sites in addition to the fact that ISIS and Russians are concurrently trying to destroy Syrian opposition, in accordance with their own ambitions: Russians for the reasons mentioned above and ISIS in order to establish itself as the sole Sunni power keeping back the Shiite tide.

Most probably even if Russia has enjoyed some success in the first phase of its plan, the next stage will not be an easy one. The Russian military air force and artillery are empowering the Syrian regime where it already has a formidable superiority over the insurgents, namely firepower, yet leaving Assad’s key problem, manpower, unaddressed. It should be noted that many local sources confirm that defections from the Syrian army are still continuing to this moment.

More Islamic extremism won’t please the West, will bring more conflicts in Syria, and reshuffle the cards. The United States and Europe will not be in favor of standing idly in front of a new escalation of extremist forces – the world has not yet finished with the monstrosity called ISIS. United States jets have already bombed a mortar factory belonging to the non-jihadi Jaysh al-Sunna rebels, who were preparing to hit the Alawite Mountains.

In the end, we must not forget the fundamental fact that Bashar Assad did not earn his presidency by elections, as his father, and his regime is accepted as a repressive and dictatorial regime. Putin is also far from being perceived as a democratic leader; he is pretending to seek a “political solution” that comes on the back of soldiers, aircrafts and advanced missiles in Syria. Napoleon once said “Never interrupt your enemy when he is making a mistake.” The sad reality is that the Russian mistakes of today are only paid for by unarmed Syrian civilians who have seen their country torn to pieces by war for the last five years.