Russia-NATO war closer than ever?

While Russia called its highest ranking diplomat in Kiev’s Embassy to Moscow, Ukraine discussed a proposal to impose martial law for 60 days, after President Petro Poroshenko met his top military and security chiefs on Sunday night. 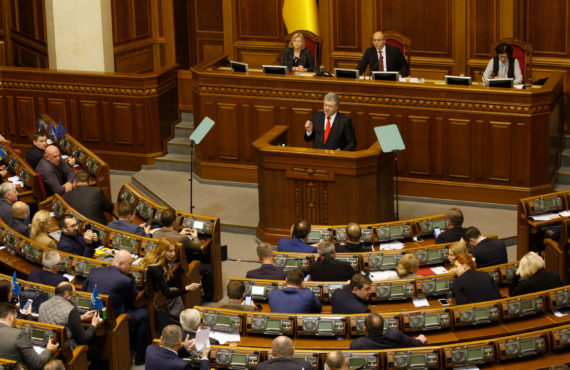 A dispute over the violation of sea laws between Ukraine and Russia on Sunday increased the tension that began almost 5 years ago between Russia and NATO.

The recent incident started on Sunday as Kiev argued that its ships were observing international maritime rules in and around the Kerch Strait, a narrow body of water separating the Black and Azov Seasto, while Moscow claimed that Ukraine had not notified Russia in advance of the ships passing and the boats ignored warnings to stop.

During the patrol of Ukrainian ships in the area, Russian security forces opened fire on three Ukrainian ships, wounding six military personnel, and seized the vessels.

NATO called for an emergency meeting with Ukraine on Monday and issued a prompt statement regarding the incident, which read, “NATO fully supports the sovereignty of Ukraine and its territorial integrity, including its rights to navigation in its own territorial waters” while Russia resisting “Western calls to free captured Ukrainian ships.”

Spokeswoman for the Russian foreign ministry, Maria Zakharova, has accused Ukraine of coordinating with the U.S. and the EU in a “planned provocation” in order to secure further sanctions against Moscow. Kiev denied its ships had done anything wrong and accused Moscow of military aggression.

While Russia called its highest ranking diplomat in Kiev’s Embassy to Moscow, Ukraine discussed a proposal  to impose martial law for 60 days, after President Petro Poroshenko met his top military and security chiefs on Sunday night.

Experts argue that President Petro O. Poroshenko could use the incident to delay a presidential election scheduled for March 2019, which polls suggest that he is unlikely to win.

A spokesman for the German Chancellor Angela Merkel urged both sides to open a dialogue, describing the incident as “dangerous.” The EU said that it expected Russia to restore the freedom of passage to Ukrainian vessels via the Kerch strait and urged both sides to “deescalate the situation.”

Canada’s Foreign Minister, Chrystia Freeland, stated that Canada condemned what she called “Russian aggression” and demanded Moscow to release the vessels. After a meeting with the Foreign Minister of Slovakia on Monday, Turkish Foreign Minister Mevlut Cavusoglu stated, “We have good relations with both countries and we are communicating with both to deescalate the tension.”

The history of conflict between Russia and Ukraine

1991 Ukraine became an independent state after the dissolution of the USSR.

2013 Thousands of demonstrators took to the streets, accusing the government of bowing to Kremlin pressure and withdraw plans to sign an EU trade deal.

2014 President Viktor Yanukovych is ousted, prompting unrest in Russophone areas in east and south Ukraine. Russia takes control of Crimea in March 2014, claiming it is protecting ethnic Russians from far-right extremists who overthrew the president. Fighting between government forces and Russia-backed separatists continues.