Russia vetoes investigation on the use of chemical weapons

On Thursday Russia used its veto power for the 10th time on Syria in the United Nations Security Council since the war in Syria began in 2011. 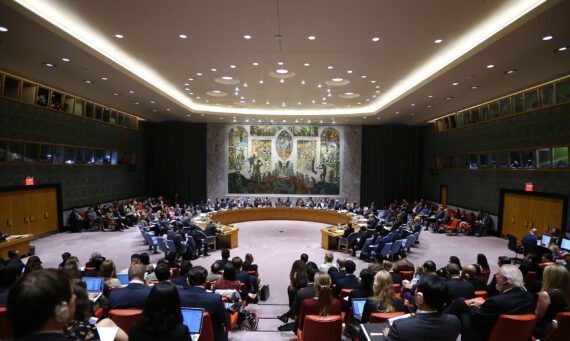 Russia cast its tenth veto on Syria in the U.N. Security Council on Thursday. This veto prevents the renewal of the mandate for a mission that investigates the use of chemical weapons in Syria.

The mandate of Joint Investigation Mechanisms (JIM)- an investigation by the United Nations and the Organization for the Prohibition of Chemical Weapons (OPCW) – unanimously created by the 15-member U.N. Security Council in 2015 and renewed for another year in 2016 is due to expire on Friday.

At the end of October, the UN mechanism decided that forces loyal to Syrian President Bashar al-Assad were responsible for a chemical attack on April 4 in northwestern Syria.

The resolution prepared by the US needed nine votes in favor and no vetoes by the UN Security Council permanent members – United States, France, Russia, Britain or China – in order to be adopted.

The US draft text received 11 votes in favor, while Russia and Bolivia voted against and China and Egypt abstained.

The permanent representatives of the United States and Russia mutually accused each other. The US Permanent Representative to the UN, Nikki Haley, accused Russia of “killing the UN mechanism” by vetoing a draft that obtained the vote of 11 members in the council.

“By eliminating our ability to identify the attackers, Russia has undermined our ability to deter future attacks,” Nikki Haley, US envoy to the UN said in a statement. “The message to anyone listening is clear: in effect, Russia accepts the use of chemical weapons in Syria.”

Russia’s UN ambassador, Vasily Nebenzia, claimed that the US draft was unbalanced and unrealistic.

“We need a robust, professional mechanism that will help to prevent the proliferation of the threat of chemical terrorism in the region and you need a puppet-like structure to manipulate public opinion,” Nebenzia said.

Russia backs Assad in the world body, also granting him military support with an extensive air campaign and ground forces in Syria.

Although Russia had agreed to the creation of the JIM, it has consistently questioned its conclusions, which also stated that the Syrian government used chlorine as a weapon several on several occasions.

The Syrian government had agreed in 2013 to destroy its chemical weapons in hand after an agreement mediated by Russia and the United States. The UN confirmed that chemical weapons were destroyed.

*This report was written by Suna Nur Sarıhan.