While in principle Russia is attempting to find a solution through the Astana talks with Turkey and Iran, Moscow also wants to use the YPG card to secure its political and military gains in Syria. 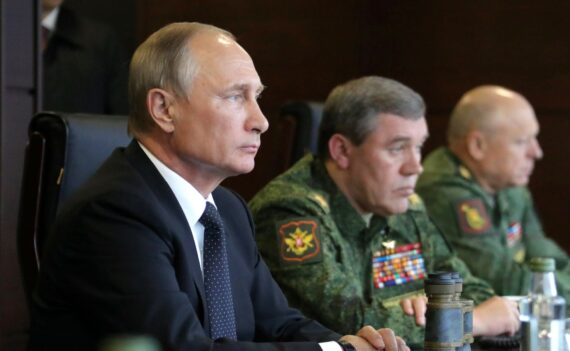 At the beginning of 2017, Russian specialists submitted a draft of the new Syrian constitution. While this document was intended to trigger discussions, nothing has recently been reported about a movement in this direction. Determined to start work in this area, Russia has initiated a new conference to draft a new constitution for Syria. The location of this conference – Sochi, Russia – will make it possible to isolate this assembly from foreign influence, especially from the west. With the Sochi initiative, Russia also wants to expand its political role in Syria by outlining Turkey and Iran.

On Tuesday, Russia invited 33 Syrian groups and political parties to a “Syrian Congress on National Dialogue,” also referred to as the “People’s Conference,” which should have taken place on 18 November in the Black Sea resort of Sochi.

The initiative taken by Russia excludes the armed Syrian opposition, which, while a party to the Astana talks, strongly opposes this move taken by Moscow. The High Committee on Negotiations, composed of the Exile Opposition, armed groups and independent personalities formed at the Riyadh Conferences, also stated that they won’t participate in the Sochi Conference. Many other Syrian opposition bodies also rejected this initiative. As Fatih Hassoun, head of the Tahrir Homs Brigade, which operates in the Rastan pocket in North Homs and member of the Astana delegation team said in a private conversation: “One of the results of the Astana Conferences […], and we made sure that the results of the Astana Conferences would not be the result of the so-called Conference of Peoples in Humeimin or Sochi, which was strongly promoted by Russia.”

On the other hand, this initiative also includes the PYD/YPG – the Syrian branch of the PKK, which is accepted as a terrorist organization by Turkey, the European Union and the US. While the US and the European Union deny links between the YPG and the PKK, Russia does not even list the PKK as a terrorist organization. Turkey, which fears a “terror corridor” operating on its southern borders, has strongly opposed Russia’s invitation for the YPG to join the Sochi conference.

Spokesman of the Turkish President, Ibrahim Kalın expressed Ankara’s opposition to the Russian invitation of the Syrian Democratic Union (PYD) to participate in the Syrian National Dialogue Congress. Talking to reporters, Kalın said: “We do not see the issue in Kurds being invited to the Congress of the Syrian people as representatives of the Syrian population, but PYD is a terrorist organization. Giving them space on the negotiations platform is unacceptable, we shall never agree to this.” Turkey’s rejection was no surprise, but why did Russia invite the PYD/YPG?

While in principle Russia is attempting to find a solution through the Astana talks with Turkey and Iran, Moscow also wants to use the YPG card to secure its political and military gains in Syria. Thus, while on one hand Russia is using the Turkish threat against the YPG for political and military gains, the Putin administration is also attempting to use the YPG towards Turkey in order to receive concessions from Ankara. For example, following negotiations with the YPG, Russia has succeeded in gaining exclusive access to some of the military facilities around Afrin, including the Mennaq military airport.

Russia has also established a military presence in Tel Rifaat, which, with the help of de-facto Russian air support, was captured by the YPG from Syrian opposition factions. Russia is not only present militarily, but is also actively recruiting fighters for the 5th Legion – a military body announced by the Assad regime on 22 November 2016. This legion’s commanding power directly follows Russian orders. Many fighters of the Syrian Democratic Union led by the YPG have deserted from the group and have joined the 5th legion. It is reported from sources that Russia pays these deserted recruits in Tel Rifaat $400 per month. This is four times higher than the salaries of YPG militants in Afrin.

In spite of these developments, it must be noted that Russian relations with the YPG are complicated. While the YPG in the Sheikh Maqsoud district of Aleppo is enjoying self-governance, when the Turkey-backed Syrian rebel factions wanted to launch an attack on the YPG in the Manbij region, it was the Russians who brokered an agreement between the Assad regime and the YPG in order to protect the group. The agreement included both a military presence of Russia and the Assad regime in the Manbij region and control of an administrative building in return for protection against military operations conducted by Syrian rebels.

Turkey and Russia have made significant progress in the Astana talks and in accordance with this process, Turkey has deployed its forces to southern Afrin. While Turkey is besieging the YPG on multiple surfaces, regime-held areas in Aleppo are still providing supplies to Afrin. Within this, Russia has expanded its military presence in the area. Since Turkey’s main concern has been to dismantle the YPG from northern Syria, one wonders how Russia will appease Ankara. Moscow is playing a multi-level game in order to increase its influence in Syria: while Russia wants to limit Turkey, the Putin administration is also trying to limit the Americans in Syria with the help of Turkey. Russia also knows that a solution in Syria without Turkey is not possible. Therefore, to avoid a dominant Turkish policy in Syria, Russia doesn’t want to lose the YPG card, as if necessary, Russia will not be reluctant to use the YPG against Turkish interests in Syria. It should be remembered that the PYD still maintains a political office in Moscow.

Cooperation with the YPG is also a Russian strategy in regards to its rivalry with the US. While the US controls the YPG east of the Euphrates River, Russia intends to control the group west of the Euphrates River. More, as noted in the draft constitution that was written by Russian specialists at the beginning of this year, Russia also holds a positive outlook on the idea of an autonomous YPG region in northern Syria. Thus, while the US has provided, and continues to provide, immense military support to the YPG, Moscow is the main political power which has the needed influence over the Assad regime to grant the YPG an autonomous region in northern Syria. Therefore, Russia wants to drive the US out of Syria by winning the sympathy of the YPG. While Russia usually perceives factions in Syria supported by the US as its enemy, this is different in the case of the YPG.

Overall, Russia is playing a complicated political game in Syria, trying to manipulate the disputes between all the political groups to its advantage. The Syrian Congress on National Dialogue is a new step in Russia’s efforts to strengthen its role in Syria. While Russia has ruled out the US, Europe and the Gulf States with the Astana talks, Moscow is now trying to exclude Turkey, Iran and all other actors with the initiative in Sochi. While excluded from the Geneva and Astana talks, the YPG controls a large part of Syrian territory. Aware of its strong position in Syria therefore, Russia has invited the YPG to the Sochi conference as it is trying to take control in Syria by dividing other actors.