Salman Trumped: “You can’t survive two weeks without me”

In a bid to pressure a close ally over rising oil prices, US President Donald Trump cautioned Saudi Arabia hinting that it would be improbable for Saudi Arabia to endure two weeks without military support from Trump Administration. 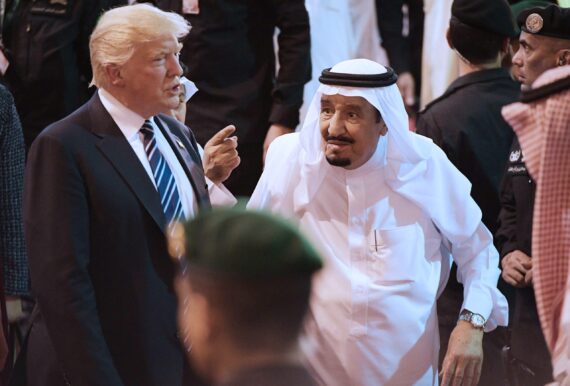 US President Donald Trump and Saudi Arabia's King Salman bin Abdulaziz al-Saud take part in a welcome ceremony ahead of a banquet at Murabba Palace in Riyadh on May 20, 2017. / AFP PHOTO / MANDEL NGAN (Getty Images)

In a bid to pressure a close ally over rising oil prices, US President Donald Trump cautioned Saudi Arabia hinting that it would be improbable for Saudi Arabia to endure two weeks without military support from the Trump Administration.

President Trump was quoted: “We protect Saudi Arabia. Would you say they’re rich? And I love the king, King Salman. But I said, ‘King, we’re protecting you. You might not be there for two weeks without us. You have to pay for your military. You have to pay.”

While the president didn’t indicate the timing of his remarks and the White House indicated that the call focused on “issues of regional concern”, it is highly possible that they were made during his call with King Salman bin Abdulaziz al-Saud over the weekend.

SPA, Saudi Press Agency, run by the state indicated that the two leaders discussed “efforts to maintain supplies to ensure the stability of the oil market and ensure the growth of the global economy.”

Trump has been making remarks akin to these about other close allies such as Germany, Japan and South Korea to shoulder more of the responsibility by taking “more of the financial burden of their defense.” These statements have alerted many international observers and concerned other US allies like the pro-Israel lobby over the reliability of the commitment and support of US towards its allies.

Trump’s confrontational statements about a country US deems a close ally were made during a campaign rally on Tuesday in Mississippi which drew a standing ovation from his supporters.

Crude oil prices have rocketed to a four-year high and in retaliation Trump is pressuring OPEC to lower the costs which has peaked to over $80 per barrel for Brent in the last month. Saudi Arabia, the world’s top oil exporter and the de facto leader of OPEC, plays a critical role in the oil cartel.

“OPEC nations are, as usual, ripping off the rest of the world and I don’t like it,” President Trump said, angered. “Nobody should like it. We defend many of these nations for nothing, and then they take advantage of us by giving us high oil prices. Not good. We want them to stop raising prices. We want them to start lowering prices and they must contribute substantially to military protection from now on.”

While it is too early to tell whether this spat will snowball into a major crisis, King Salman’s silence on the matter is keeping the fog in the air.