Security Council failure comes as the latest dash for Rohingyas who are facing state purge and ethnic cleansing in their home country that denies them recognition. 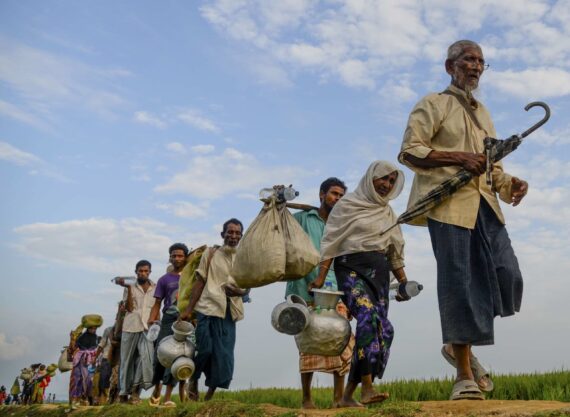 Rohingya refugees walk to take shelter in the southern part of Bangladesh at Palongkhali in Cox’s Bazar, Bangladesh on November 02, 2017. Anadolu Agency

As the numbers of Rohingya Muslims fleeing Myanmar reach more than 600,000, the UN Security Council met yet another failure on the issue on Monday.

Myanmar’s neighbor and permanent member of the Security Council, China, blocked a resolution condemning the violence of Rakhine state, Myanmar against Rohingya Muslims. The resolution was backed by the U.S., U.K. and France. Security Council failure comes as the latest dash for Rohingyas who are facing state purge and ethnic cleansing in their home country that denies them recognition.

Rohingya is the latest question on international conscience that has incessantly chosen to give precedence to state interests over morality.

In spite of the veto, in a unanimous statement the Council called on the Myanmar administration to allow Rohingya Muslims to return to their homes from neighboring Bangladesh, which has been sheltering the refugees since the outbreak of the crisis in August this year.

The Security Council also condemned the violence inflicted upon poor Rohingyas, expressing “grave concerns” over human rights violations against the Rohingya such as killing, sexual violence and burning of homes and property.

Asking the Myanmar government to halt further “excessive” use of military force in Rakhine state, the council called for restoration of civilian administration and for the application of the rule of law.