Annegret Kramp-Karrenbauer needs to clarify her relations with Angela Merkel. Even though she underscores her own career path by pointing out her individual positions, the general societal perception positions her in Merkel’s shadow. This critical issue has to be clarified as it could otherwise lead to a de-facto “dual-leadership” crisis. 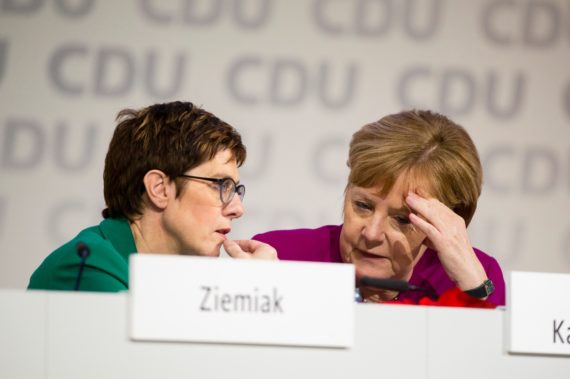 After 18 years of ruling Germany’s Christian Democrats (CDU), Chancellor Merkel’s official role in the party came to an end on Friday. However, this does not mean that her ability to control the party in a continuous way will diminish. As was guessed in this column and as was estimated by recent polls, Annegret Kramp-Karrenbauer was elected as the new chair of Germany’s still strongest conservative party. Thus, Friedrich Merz, the actual rival of Merkel, lost his struggle for party leadership once again – as he had competed back in 2002. Consequently, German dailies preferred the headline “don’t mess with Merkel” in order to stress the Chancellor’s strength – at least within the party – to mobilize her supporters.

However, it should definitely be kept in mind that Karrenbauer was narrowly elected as party chair by receiving 517 of the 999 votes (51.8 per cent) while Friedrich Merz received 482 votes. It was also not a surprise that the young conservative-populist Jens Spahn did not become the party’s new leader – at least for now. Karrenbauer will succeed Angela Merkel who had similarly been elected in 2000 as the party’s chair when she was similarly holding the party’s secretary-general office.

Annegret Kramp-Karrenbauer’s challenging chief purpose is to unify Germany’s Christian Democrats (CDU) ahead of crucial regional and European elections in 2019.

In general, Annegret Kramp-Karrenbauer’s main purpose for the near future can be described as unifying the party ahead of crucial regional and European elections in 2019. While she will technically lead the party, it’s most likely that Chancellor Merkel will continue to govern the country by dominating its political agenda and direction. It could be suggested that Merkel may insist to control the party through her close ally, Annegret Kramp-Karrenbauer.

It would have been a problem if a rather conservative personality such as Merz would have become the party’s leader, as this would have caused a probable power struggle between both poles. However, due to the fact that Karrenbauer is a close ally of Merkel, and despite her statements that she will or might also challenge Merkel when needed, it seems rather unlikely that huge disputes will emerge. Thus, it’s quite sure that Merkel will most likely finish her last period as Chancellor until 2021 without facing any problems with the party chair. Rather, she will cooperate with the party’s new chairperson.

Here are seven challenges for Karrenbauer: 1) intra-party reconciliation between different camps, 2) clarifying relations with Merkel, 3) setting future goals and the agenda, 4) positioning the CDU vis-à-vis the AfD, 5) winning back votes lost to the Green Party, 6) starting a new dialogue with the CSU, 7) mobilizing the party for the upcoming elections.

Subsequent to the party convention, one notices that German media outlets have addressed a list of new challenges that Karrenbauer has to deal with in the upcoming months. According to such a piece, there are seven aspects that Karrenbauer will face. First of all, Annegret Kramp-Karrenbauer has to start a so-called reconciliation process in order to bring all party camps together. That is to say, she has to find a balance between conservatives and the centrists. In a second point, Karrenbauer has to clarify her relations with Angela Merkel. Even though she underscores her own career path by pointing out her individual positions, the general societal perception positions her in Merkel’s shadow. This critical issue has to be clarified as it could otherwise lead to a de-facto “dual-leadership” crisis.

The third aspect is about Karrenbauer’s potential goals and projects for the future on which she has to focus on herself. It’s argued that only with such a focus will her popularity be maintained. Furthermore, the new chair has to think about the CDU’s position vis-à-vis the AfD, while having to challenge the far-rightists. Similarly, Karrenbauer must plan how she will bring back voters to the CDU, who recently preferred the Green Party. Unfortunately, these dynamics do not seem very comfortable.

As the sixth point, it is argued that the new chairperson has to find a new dialogue with the CDU’s Bavarian sister party and coalition party, the CSU. In the recent past a couple of disputes between the CDU and CSU leaders almost ruined the coalition government. Karrenbauer has to keep in mind these potential problems while working together with the conservative CSU, particularly in policy fields such as migration. Finally, the new elected chair will have to show that she is able to mobilize the party by aiming to win elections. Indeed, 2019 will definitely be an interesting year as local elections and EU elections are planned.

Thus, with a new chairperson, a new era has begun for the CDU. It’s too early yet to make any concrete predictions about the future of German politics in general. However, there is still an argument – even stressed by the former Chancellor and SPD leader Gerhard Schröder – which criticizes the election of Karrenbauer as chair. According to this view, it’s a mistake that the rather conservative politician has not been elected as chair only because with him Germany’s social-democrats and Christian Democrats would have had the chance to differentiate themselves from each other. And as a consequence, a conservative person such as Merz might have weakened marginal parties such as the AfD. But to be honest, despite the fact that the conservative Karrenbauer is not a one-to-one imitation of the rather liberal-oriented Merkel, it’s obvious that the German public would always vote for “original” far-rightists like the AfD instead of preferring a new-conservative such as Merz.