Politics Today believes that the only way forward is to grant the Palestinians their full rights on their land and to call a spade a spade. Today, Israel has become an apartheid state and the Palestinian people deserve to live in freedom from fear. 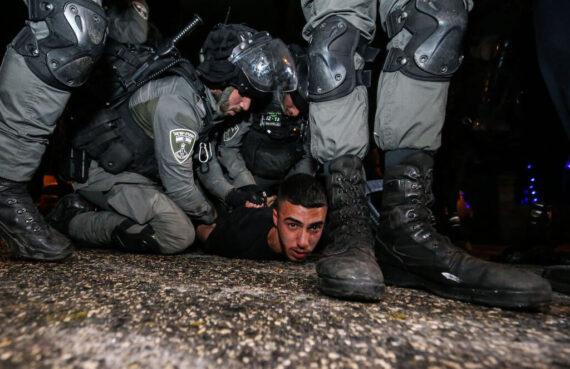 Israeli forces take a Palestinian into custody during a demonstration at Sheikh Jarrah neighborhood after Israeli government's plan to force some Palestinian families out of their homes in East Jerusalem on May 05, 2021. Photo by Mostafa Alkharouf, Anadolu Images

Israel’s provocative policies in Jerusalem, particularly in the Old City and at Al-Aqsa Mosque, the second holiest site in Islam, violate international law and threaten the existence of Palestinians in the city. Israel should end the occupation and cease all its policies that aim to reduce the Palestinian presence in the city by replacing the land’s rightful owners with Jewish settlers.

We view Israel’s measures in the city, the latest of which was the crackdown on Muslim worshipers while performing their prayers during the last days of the holy month of Ramadan, resulting in the injury of 208 persons, as a complete disregard for the feelings of Muslims worldwide and the international community. The latter usually chooses silence over morality, tacitly encouraging Israeli occupation authorities and settlers to violate the rights of the Palestinians further.

The expulsion of Palestinians from the Jerusalem neighborhood of Sheikh Jarrah is a continuation of a seven-decade-long policy based on the ethnic cleansing of Palestinians, the destruction of their lives, their social fabric, their houses, and, at the same time, an orchestrated effort to increase the city.

Before the Israeli occupation of Jerusalem in 1948 and 1967, the city had always been an example of religious co-existence where Muslims, Christians, and Jews lived peacefully for centuries. The current Israeli colonial policies inflict harm on the residents of the city including the Jews who want to observe their rituals in peace.

Israel’s policies in the city of Jerusalem and elsewhere in Palestine have been characterized by various international and local human rights organization as apartheid. The mass expulsion of Palestinians from the neighborhood of Sheikh Jarrah is in line with Israel’s policies of denying Palestinians their basic rights and it has to end now. The power of people on the ground will always prevail over the power of guns, and it is time for Israel to allow the return of Palestinian refugees to their homes, rather than making them refugees for the second time.

Many of the residents of the neighborhood of Sheikh Jarrah in Jerusalem are refugees from West Jerusalem, whose houses were taken by Israeli Jewish settlers in 1948. Now is the time to allow all refugees to return back, in accordance with UN Resolution 194.

There is no doubt that the U.S. recognition of Jerusalem as Israel’s capital has encouraged Israel to adopt more violent and oppressive policies against the Palestinians. This has been further advanced by the normalization agreements signed recently between certain Arab countries and Israel.

Politics Today believes that the only way forward is to grant the Palestinians their full rights on their land and to call a spade a spade. Today, Israel has become an apartheid state and the Palestinian people deserve to live in freedom from fear. Occupation and mass expulsion are not sustainable. We call for all countries of the world to invest in justice rather than apartheid.