Should Turkey be Optimistic About Trump's Presidency?

Trump may not be as Islamophobic or hawkish as his campaign statements, or his future cabinet members, make him out to be. Most likely, Trump in fact has little knowledge of the world he will soon be dealing with as the head of the sole superpower. 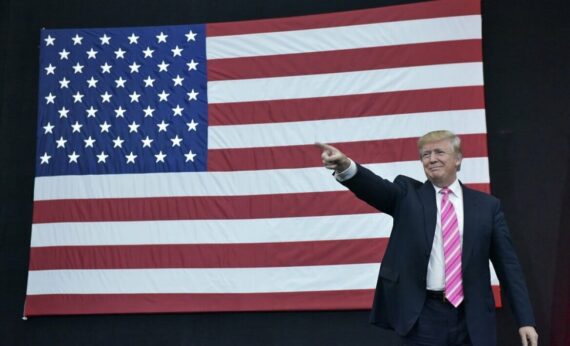 On November 21, US President-elect Donald Trump met with a man that will apparently become his head of Homeland Security when he takes office in January. After the meeting, Trump and Kris Kobach were photographed, and in Kobach’s hands was a document spelling out what he would do to curb immigration and defend against the threat of terrorists coming to the country. At the top of the list were three policies: eliminating the intake of Syrian refugees entirely, re-instating a Bush-era tracking system for immigrants coming from “high-risk” countries, and ordering border security to question Muslim travelers on their views on “sharia law, jihad, equality of men and women, the United States Constitution” – something the Trump team has dubbed “extreme vetting.”

SecurityBy Serhan Afacan
Kobach’s proposal has confirmed fears among many Americans – from Hispanics, to African-Americans, to Muslims and a host of Christian and Jewish groups – that the bellicose talk that characterized Trump’s campaign might be more than just political pandering for votes, that the man may intend to do exactly what he promised to do, as soon as he is sworn in as President.Except for a vocal minority, a slew of world leaders have said they would like to give Trump a chance, that perhaps when confronted with the reality of his new job, he would sober up and review his ideas.  Yet there is little indication this is going to happen, and foreign leaders dealing with Trump may need to be more vocal of what a Trump presidency could mean for the rest of the world.

Trump himself has given little indication of what his policies would be, but the people – all white, and almost all men at this point – he has indicated for his cabinet are troubling enough. Journalists, trying to get a grasp on what a Trump presidency would look like, have questioned the potential cabinet members over the last two weeks on the most controversial proposals, and have been repeatedly told Trump will “not rule out” anything.

Trump’s handpicked Chief of Staff: a registry for all Muslims? No, but maybe a registry for “radical” Muslims. The head of the largest pro-Trump campaign fund: Japanese-style internment camps for Muslims? Maybe: “We’ve done it based on race, we’ve done it based on religion, we’ve done it based on region…There is precedent for it.” The man Trump has hired to be his chief strategist: the head of a news website that is a reincarnation of Nazi propaganda in all but name, with the addition of Muslims to the list of those who must be exterminated. Among Trump’s advisors are the most Islamophobic personalities in America, including Frank Gaffney, who helped coin the term “creeping Sharia,” and advocates Congressional hearings to summon all Muslim leaders to prove they do not have a connection to the Muslim Brotherhood, which, in Gaffney’s view, is behind every ill that seems to plague the world today.

Muslims are especially worried. The last two weeks have seen hundreds of incidents of public violence and attacks on Muslims being reported – Muslim women having headscarves pulled off on college campuses, worshippers finding graffiti at entrances to their mosques – many of them cases where the perpetrators took time to mention they felt they could commit these crimes because Trump had been elected president.

While campaigning, Trump said he would “bomb the shit out of ISIS.” His choice for National Security Advisor is General Michael Flynn, a man who has called Islam a “vicious cancer,” and repeatedly says Muslims are not following a religion, but an ideology, and should not enjoy the benefits of freedom of religion given to others. Flynn would oversee President’s Obama’s vast intelligence and military powers, including a drone program that has killed thousands of civilians in Yemen, Somalia and Pakistan.

As Muslim nations who have the resources and clout to combat Islamophobia take stock of Trump, there are indications many no longer expect anything promising from any American president, and would prefer a straight-talking Islamophobe to the neo-liberal whitewashing they say Hillary Clinton would have continued.

Yet there is little reason to believe, beyond a hunch, that Trump will play in their favor, or that the kind of bargaining Trump has indicated he would engage in on the world stage will end up with other nations being able to walk away with any positive conclusions.

Flynn, for instance, has written he believes the July 15th coup attempt in Turkey was perpetrated by Fetullah Gulen, and that Gulen must be extradited to face trial. It would undoubtedly be a change Ankara should be happy about – extradition was perhaps always a political decision, even if President Obama’s administration has insisted it is a legal process.

But a closer look at Flynn’s argument for extradition should trouble Turkish leaders, who have been the world’s most active advocates for a pragmatic, careful, effort at combating extremist groups like Daesh. Flynn, in explaining how Gulen’s followers are part of a “sleeper terror network” does not just advocate for rooting out the Gulenists, he also puts forth troublingly ambiguous assertions that can be applied to every Islamic movement in the world today. And Flynn has repeatedly praised Egypt’s military ruler, General Abdel Fattah el-Sisi, for his work to combat “extremists” in that country.

Trump has done the same, and while he has not given his blessing to the 2013 Rabia massacre, the President-elect has praised what he calls “strong leaders” in the past. When confronted this March about comments he made in 1990 about the Chinese regime’s killing of hundreds of civilians at Tiananmen Square, Trump did not exactly back down from previous statements. “That [statement in 1990] doesn’t mean I was endorsing that,” he said. “I said that was a strong, powerful government. They kept down the riot, it was a horrible thing.”

Trump may not be as Islamophobic or hawkish as his campaign statements, or his future cabinet members, make him out to be. Most likely, Trump in fact has little knowledge of the world he will soon be dealing with as the head of the sole superpower.

But it is precisely that ignorance that should worry world leaders, in a world were facts seem to matter little, and leaders change positions as often as their socks.

Trump, for instance, has advocated for partnering with Turkey to create a “safe zone” in northern Syria, something that the Syrian rebels, human rights groups and Ankara have long called for. And on at least one occasion, Trump has hinted he would work harder than the Obama administration to meet Turkey’s concerns about groups like the YPG, which Washington currently relies on to fight Daesh.

Yet there are reasons to believe Trump has no idea what he is talking about, and when he finally sits down with his advisors to chart a course in the Middle East, he is as likely to be wooed by his Islamophobic cabinet as by a phone call from a Muslim world leader.

To explain his confusion, Trump then made a telling remark: “You know, those are like history questions. Do you know this one, do you know that one … But as far as the individual players, of course I don’t know them. I’ve never met them. I haven’t been, you know, in a position to meet them. If, if they’re still there, which is unlikely in many cases, but if they’re still there, I will know them better than I know you.”

“I will hopefully find General Douglas MacArthur,” Trump said, explaining that among his future advisors there would be a military expert like the acclaimed World War II General.

Fourteen months after that interview, Trump seems to have found his MacArthur, in Gen. Michael Flynn. Yet Flynn seems to be as ignorant and noncommittal as Trump himself. Flynn has lately praised the Turkish public’s victory over a mutinous faction of the military on the night of July 15th, but the night of the actual coup attempt, he had quite a different view.

As civilians died confronting tanks and jets in Turkey, Flynn was giving a speech at a meeting of an organization that lobbies for tougher measures against what it calls “radical Islamic terrorism.”

Flynn began by telling the audience he had just spoken with a Turkish military officer that he worked with as a member of NATO, then said Erdogan was “actually very close to President Obama.”

“If the military succeeds,” he continued, “one of the things that the military immediately said is, ‘We recognize our responsibilities with NATO, we recognize our responsibilities with the United Nations, we want to make sure that the world knows, we are, we want to be seen as a secular nation’.” The audience then broke out in applause, with Flynn raising a finger, saying “This is worth clapping for.

Umar Farooq is a freelance journalist based in Turkey, whose work has appeared in Foreign Policy, The Christian Science Monitor, The Wall St. Journal, and other outlets. He has reported from the Middle East, Central, and South Asia.