There is reason to suspect that we are on the verge of the most significant change in U.S. grand strategy in many decades. 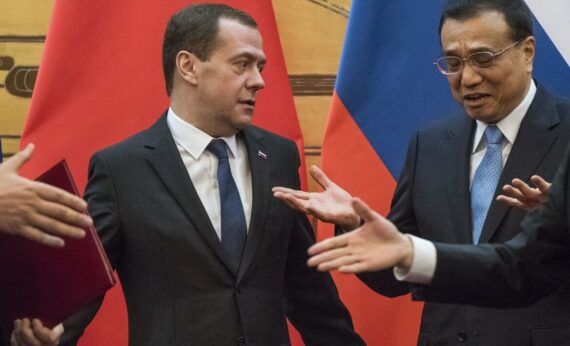 Perhaps the most important geopolitical puzzle since the collapse of the Soviet Union 25 years ago has been whether the United States will reorient its grand strategy to contain and encircle another rising great power, which is most likely to be China. The default alternative is the continuation of the Cold War alliance structure with slight modifications, where Russia is perceived as an anti-American power that needs to be contained, whereas China continues to be the most favoured nation in economic terms as part of a quasi-appeasement strategy. Incoming president Donald J. Trump will have to confront this critical question, just as every president since George H. W. Bush, who presided over the dissolution of the Soviet Union, had to.

More importantly, incoming president Trump has given very meaningful signals that he is considering China as a geopolitical threat to the United States, and Russia as a potential ally in general, and possibly also in containing the threat from China. If Trump follows up on his messages in this direction after he assumes office on January 20, 2017, we might witness the most significant shift in world politics since the Sino-Soviet split, which the United States took advantage of especially after President Richard Nixon and Secretary of State Henry Kissinger’s visits to China in 1971-1972.

American grand strategy throughout the Cold War focused on containing the Soviet Union, which was considered the primary geopolitical rival of the United States at that time. In order to achieve the objectives of this grand strategy, the United States encircled the Soviet Union with a ring of pro-American, anti-Soviet allies such as the Federal Republic of (West) Germany, Greece, Turkey, Iran (pre-1979), Pakistan, Japan, South Korea, and eventually China after the Sino-Soviet split. The United States also attempted to counter Soviet influence in every corner of the world, from Chile (e.g., pro-American coup against Allende in 1973) to Vietnam (U.S. support for anti-Communist South Vietnam), to Angola (U.S. support for UNITA against Marxist-Leninist MPLA) to Afghanistan (U.S. support for anti-Communist mujahedeen). In the end, the United States prevailed against the Soviet Union, which was exhausted and eventually collapsed in 1991.

The experience of the Cold War once again demonstrated that a grand strategy is based on the identification of the primary threat. The other, secondary and tertiary threats, may or may not be derivative of the primary threat. However, in most of the critical cases, whenever the prospect or the perception of a pro-Soviet takeover appeared in a formerly pro-American or neutral country, all the other considerations became secondary, and the United States attempted to repel Soviet influence by any means necessary, including military coups (e.g., Guatemala, Chile) and direct military intervention (e.g., Cuba, Vietnam), regardless of the many negative consequences such actions may have. The same was also certainly true of the Soviet Union. The Brezhnev Doctrine posited the Soviet Union’s right to intervene in any country where an existing socialist regime was threatened, and the Soviet Union made use of this self-proclaimed right in Czechoslovakia and Afghanistan.

The Soviet Union abandoned the Brezhnev Doctrine under Mikhail Gorbachev. Not only was Soviet involvement in distant African and Latin American countries and conflicts discontinued, but the Soviet Union withdrew its military even from its former satellite states in Eastern Europe. Furthermore, the Soviet Union disintegrated into 15 independent states by the end of 1991, an unexpected and unintended outcome that was certainly beyond what Gorbachev originally envisioned in trying to reform the state. Thus, Soviet rivalry or threats to the core U.S. strategic interests mostly ended by 1991. To the extent that post-Soviet Russia intervened beyond its borders, these interventions have been limited to the former Soviet states, which the Russian foreign policy establishment defines as the “Near Abroad.” The only notable exception to this pattern in the last 25 years has been the Russian intervention in Syria, which has been an unexpected and alarming development, among other things, also for this very reason.

American Grand Strategy since the end of the Cold War

Presidents Bill Clinton (1993-2000) and George W. Bush (2001-2008) followed the anti-Russian and pro-Chinese outlines of their predecessors’ grand strategy, which was actually designed according to the military economic distribution of power during the Cold War. For example, Clinton committed to expanding NATO, despite the warnings of many leading realist scholars to the contrary, and at the expense of antagonizing Russia. Bush continued this policy to its furthest extent, by inviting even Georgia and Ukraine into NATO, although key European members of NATO blocked the extension of the NATO Membership Action Plan to these two post-Soviet republics. This was soon followed by the Russian-Georgian Five Day War in August 2008, which resulted in the (most likely permanent) dismemberment of Georgia, by reinforcing the independence of Abkhazia and South Ossetia, two breakaway republics from Georgia.

Even more importantly, the United States focused most of its attention on the Middle East since the dissolution of the Soviet Union. Indeed, Afghanistan and Iraq constitute by far the most comprehensive, costly, and consequential foreign interventions of the U.S. government since the end of the Cold War. Neither one of those interventions was directly related to balancing against or containing Russian or Chinese power and influence, and especially the Second Iraq War was heavily criticized based on strategic considerations as “an unnecessary war.”

The Taliban regime was certainly not a client state of Russia or China; on the contrary, it was arguably the outgrowth of the American effort to contain the Soviet Union. Iraq once had good relations with the United States, for example during the Iran-Iraq war, and although relations later soured, it would be far fetched to claim that Iraq was a client or a satellite state of Russia (or of China). Even worse, U.S. intervention in Iraq pushed erstwhile American allies in the region, such as Turkey and some other European members of NATO, into closer cooperation and collaboration with Russia against U.S. military interventions in the Middle East.

The United States interventions in Afghanistan and Iraq did not help but arguably harmed any effort to contain Russian or Chinese influence in the region. In contrast, the United States did not intervene in Syria, arguably the country that comes closest to being a Russian client state in the Middle East, which is very ironic from the point of containing Russian influence in the Middle East.

President Barack Obama’s attempt to “reset” relations with Russia and “pivot to Asia” can be interpreted as an earlier attempt, however unsuccessful, to refocus American grand strategy on China while seeking a Russian American alignment. It may or may not be coincidental that Obama’s attempts were paralleled by his withdrawal of U.S. troops from Iraq and from the broader Middle East, which ironically resulted in Iran, an ally of Russia, becoming the dominant foreign influence over the Iraqi government. However, if one considers Obama’s insistence on the Iran deal, then one might even argue that U.S. withdrawal deliberately strengthened Iran at the expense of other regional actors in the Middle East. In any case, this deal brought Iran and the United States much closer than any time since the overthrow of the Shah in 1979, and the American-Iranian rapprochement was persistently pursued at the expense of antagonizing traditional allies of the United States in the Middle East such as Israel, Saudi Arabia, and Turkey.

Trump’s views on Russia and China

The expressed views of President-elect Donald Trump, both before and after his election, indicate an unmistakably positive attitude vis-à-vis Russia, and also an unmistakably negative attitude vis-à-vis China. Put together, Trump’s Russophilia and Sinophobia predispose him to make the grand strategic shift that would prescribe the United States to encircle China with the help of Russia.

First, Trump’s Russophilia is well known and often emphasized. Even before Trump secured the candidacy of the Republican Party, Reuters reported that, “Trump (is) being advised by ex-U.S. Lieutenant General who favours closer Russia ties”, referring to Michael Flynn whom Trump chose as his National Security Advisor upon being elected president. More specifically, in a lengthy interview he gave to the New York Times, Trump also declared that, “NATO is obsolete”, which is a policy position likely to endear Russia. Russian policy makers mostly see NATO as an anti-Russian organization, and they likewise perceived NATO expansion as a hostile move by the West against Russia. Moreover, Trump even speculated about fighting together with Russia against Daesh in Syria. Likewise, Trump often voiced his admiration for the leadership of Russian president Vladimir Putin, and this admiration appears to be reciprocal.

Some, including U.S. intelligence agencies, even alleged that “Russia ordered [an] ‘influence campaign’ to aid Donald Trump in election.” Trump congratulated Putin for not expelling American diplomats in retaliation for the expelling of Russian diplomats from the United States. He also criticized those who oppose good ties with Russia as being “‘stupid’ people, or fools.” Thus, there is sufficient evidence to claim that Trump expressed pro-Russian views consistently throughout his campaign, and continued to do so after his election.

Second, Trump’s opposition to the rise of China at the expense of the United States is also very explicit and well known. For example, he “accused China of dumping exports and of devaluing its currency, the yuan.” While most of Trump’s criticisms of China are related to issues of trade, his decision to directly talk to the president of Taiwan was a major geopolitical signal, which sent shockwaves across the Asia Pacific. While Henry Kissinger, the nonagenarian foreign policy guru and the architect of the Chinese-American rapprochement in the early 1970s, called Trump’s decision to talk to the Taiwanese president as “unwise,” some others such as Marc Thiessen saw it as a “brilliant” geopolitical move. At the other end of the spectrum, James Fallows went as far as decrying Trump’s surprising step as “bottomless pig-ignorance & recklessness.” In any case, Trump already broke with more than three decades of precedent, since the United States switched its recognition from the Republic of China (Taipei government) to the People’s Republic of China (Beijing government) in 1979. Thus, there is sufficient evidence to claim that Trump was very critical of Chinese policies consistently throughout his campaign, and continued to do so after his election.

There is reason to suspect that we are on the verge of the most significant change in U.S. grand strategy in many decades. Admittedly, the first election of president Obama also promised significant changes in U.S. grand strategy, such as the gradual withdrawal of the U.S. military from the Middle East, and a more evenhanded official position in approaching the Israeli-Palestinian conflict. By the end of Obama’s two terms in office, it is possible to say that very limited and somewhat belated versions of those promises were eventually delivered. In conclusion, if Trump is able and willing to follow up on his criticisms of China and overtures to Russia, for better or worse, we might witness the most significant shift in world politics since the 1970s.