China-Turkey diplomatic relations have followed a fluctuating trend since they were officially established in 1971. Generally the relationship between China and Turkey strengthens when Turkey has tension with its Western allies. Otherwise, the relations are fairly static and perform well below their potential. 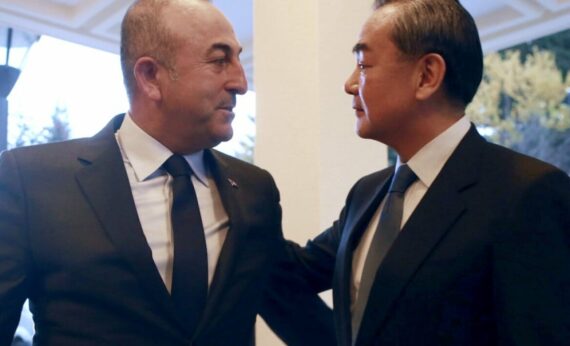 China-Turkey diplomatic relations have followed a fluctuating trend since they were officially established in 1971. Generally the relationship between China and Turkey strengthens when Turkey has tension with its Western allies. Otherwise, the relations are fairly static and perform well below their potential. Even though various political and economic measures were proposed to endow dynamism to the relation, it is obvious that they were not implemented.

The most distinct characteristic of China in terms of policies regarding distant countries can be defined as “passive pragmatism.” According to this, China distances itself from taking political risks in a certain region, as it is not to their national interest, while simultaneously trying to create vibrant economic relations within the given region. The literature on China’s relations with distant regions ranging from South America to Africa and to the Middle East usually follows this trend and specifically focuses on trade, financial, infrastructural and industrial investments of China. The common themes about China’s relations with the countries of the said regions are the aspects of energy and accessing new markets.

Limited evaluation on the political, social and economic transformation of the two countries in the last thirty years causes one of the most essential deadlocks in China-Turkey relations. The political pressure points derived from the Uighur issue have created an ideological layer in the relations. For Turkey, China is not a country only to be evaluated in terms of bilateral relations, but also in terms of regional and global relations. Despite the signing of a “strategic partnership” between China and Turkey in 2010, it is not possible to claim that the relations are being developed with a “strategic” plan. With the exception of plans such as improving bilateral trade and foreign investments which worked in favor of China, neither Turkey nor China is implementing policies aimed at a certain political vision or objectives.

Opportunities and Fields of Cooperation

The institutional cooperation mechanism developing in tandem with China’s status in global politics is one of the leading fields of cooperation between Turkey and China. In order to develop this mechanism, which has yet to be established, both countries must be truly aware of their positions within the global economic and political order. For instance, Turkey has been rearranging its foreign policy since the early 2000s, transforming it from a NATO and Euro-Atlantic centered foreign policy to a multidirectional and active one. China is a country that should be evaluated bearing in mind the global system and its new types of relations, not with the binary system of the Cold War. China is neither an alternative nor a challenger in the current global order; on the contrary, it is employing a fair reconciliatory approach in the current system. This approach is compatible with Turkey’s existing foreign policy perspective and objectives.

Another field of cooperation concerns economic development. Leading issues in the relations between China and Turkey, like the foreign trade deficit and bilateral investments, along with new projects and institutional cooperation, have to be improved. The Silk Road Project, for instance, is a golden opportunity for this; it is perceived as a project, which may also improve the current economic relations between the two countries. Both countries emphasize new and very concrete opportunities for investment and economic cooperation.

Military and security cooperation could also be seen as an important field for cooperation. In this context, Turkey has developed military relations with China in the fields of arms sales and the market in terms of the modernization of existing weaponry. A Chinese company winning Turkey’s bid for air defense systems by proposing the best costs and conditions in 2013 was an important development in military and technological cooperation between the two countries. These developments are prominent in terms of showing that two countries can have military cooperation despite their physical distances.

The new equations in the Middle East formed after the Arab Spring may also force a new cooperation mechanism between Turkey and China. The most probable field of cooperation is a consultation mechanism, which will determine common threats regarding the Iraqi and Syrian crises that concern both countries. The cooperation between China, as a permanent member of the UN Security Council and an influential actor in the decision-making process, and Turkey which is directly effected by both of the aforementioned crises in terms of border security and refugee influx is important for the resolution of the issues.

The most conspicuous effects of the improving economic relations between Turkey and China in the 2000s were seen in the social and cultural aspects. China’s social and cultural visibility in Turkey was raised especially with the establishment of Confucius Institutes starting in 2008. However, the same is not true for Turkey: as of 2016, Turkey was not able to establish an institution such as Yunus Emre Institute that would introduce Turkish cultural and social life to the Chinese population.

Great power politics is one of the leading structural problems between Turkey and China. Due to China’s increasing presence in global economy and politics since 2000s, Turkey had to establish a new form of relations with China, a first after the US, EU and Russia. Considering traditional alliances and historical experiences, it is impossible to transform the relations overnight. The real reason behind Turkey’s NATO membership being questioned as a result of Turkey planning to buy air defense systems from China was actually the competition between the great powers. On the other hand, China’s foreign policy on the Syrian civil war is more similar to Russia that is different from Turkey’s. These contradictions will probably continue to exist in the near future.

The Syrian civil war is one of the most prominent issues since 2011 wherein Turkey’s and China’s individual policies diverge. Since April 2011, when the first signs of a civil war were being observed, China’s Syrian strategy has been mostly overlapping with the Russian one. Rejecting all solutions proposed by Turkey at bilateral and multilateral meetings, along with UN mechanisms, China is blaming Turkey for terrorism, border security issues, humanitarian crisis and international immigration in the context of the Syrian crisis. China has also joined the attempts by the Western media to shape Turkey’s policies through DAESH. Looking from the perspective of the Uighur issue, China is alleging that Turkey is supporting Uighur fighters in Syria and that those fighters might carry out terrorist attacks in China.

The economic issues between the two countries have eventually transformed into a structural problem. The leading issue is the $23bn deficit in trade which works against Turkey in 2016. Turkey is not able to diversify the products it’s selling to China or cannot compete with Chinese equivalents. Yet, these are not the only reasons for the problem. Behind the trade deficit is the fact that intellectual property rights are flaunted and the flow of cheap and poor-quality Chinese goods into the Turkish market negatively effects current economic relations. Turkey, as a candidate for membership in the EU, was obliged to obey the EU standardization agreements and property rights regimes, while China, as a third party, had no such obligation to adhere to these dictates in its economic activities. Thus, property rights violations and the quality of Chinese products flowing into the Turkish market has become a structural problem in Sino-Turkish economic relations.

In considering how Turkey-China relations have to be redefined, different foreign policy objectives of the two countries may also be reconsidered as a structural issue. For instance, China has completely different policies in Cyprus, Kosovo, Bosnia and Herzegovina and Nagorno-Karabakh than Turkey.

The Uighur issue has also become a structural problem between the two countries. This issue comes to the fore due to the political, economic, social and cultural rights of Uighurs, along with the historical background of the problem. According to China’s policies, the Uighur problem is a national security issue. For this reason, China refrains from discussing the problem as a component of foreign policy or an international issue. However, the growth of the Chinese economy and China’s integration with international institutions inevitably internationalized the Uighur issue. It’s known that the Uighur diaspora is active in many countries, especially in the US, Germany, and Turkey. Discussing the infringement of political, social and economic rights, the Uighur diaspora is forcing the related countries to create resolutions.

While the Uighur problem is gradually becoming an internal issue of China, its results affect Uighurs living in Turkey and in other countries. It is definite that the Uighur issue, which puts both Turkey and China in a conundrum about security, needs multidirectional analyses and resolution proposals. Therefore, both parties have to prepare a reasonable action plan for the resolution of the issue. Uighurs bridging Turkey and China in terms of friendship is a reasonable ideal; however, under the current conditions, it is nothing more than a wish.