Sisi’s Re-Election and the Western Stance: How the West Failed in Egypt

While Egypt witnessed a guideline example of an undemocratic election process, the Western “democracies” such as the U.S. and the U.K. rushed to celebrate Sisi’s victory. Immediately after the election results were announced, U.S. President Donald Trump and British Prime Minister Theresa May called Sisi to express their support for the “democratization” process in the country. 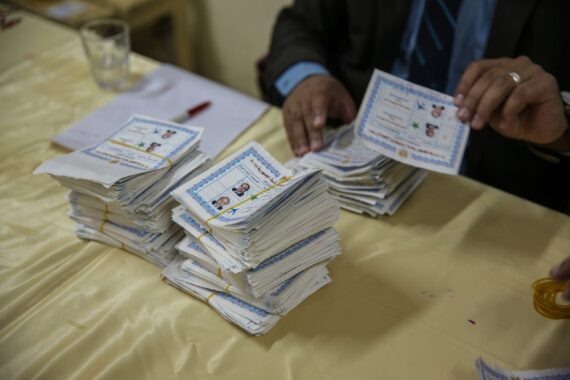 Egyptian election workers count ballots on the third and last day of the 2018 Egyptian presidential elections in Faiyum, Egypt, on March 28, 2018. Anadolu Agency

Egypt has left behind one of the most anti-democratic electoral processes seen on a global level in recent years. Abdalfettah Al-Sisi, who led the military coup in 2013, won the elections held by the junta regime in 2014 and established a far repressive regime in the country than the Mubarak period. By employing all kinds of anti-democratic practices, Sisi’s regime has been at war with democracy. During Sisi’s presidency, the civil opposition came under heavy pressure by the regime, media was taken under government control and civil society has been restricted extensively.

During the past five years, thousands of civilians who were opposing the regime were arrested and tried in military courts. The regime did not (and continues not to) tolerate any opposition against those who are perceived as a threat to the security of the regime. This situation was particularly observed in the period before the 2018 presidential elections. Numerous individuals who announced their intention to run in the elections were either forced to withdraw their candidacy or imprisoned. While the 2018 presidential elections were held in such an environment, the leader of Ghad Party Moussa Mostafa Moussa, who defined himself as a “strong supporter of Sisi,” was the only candidate who could participate in the elections “against” Sisi.

For many, this election has not gone beyond a democratic ritual. This is reflected in the low level of participation. The official figures suggest that voter turnout was 41%. However, many observers claim that turnout was much lower than figures published. On the first day of the voting process, only %7 of Egyptians participated in the elections, displaying a strong message of discomfort against the Sisi regime. In an effort to encourage voters, the Egyptian regime announced that voting is obligatory and individuals that fail to vote, would face a fine.

With this concern in place, many Egyptians went to the polls and cast their votes. The government also arranged free transportation for public and private workers in large cities. There were even reports that the police checked IDs of people at cafes and forced them to go and vote. It was also claimed that in some regions, people who went to vote were paid money or given food aid. Following the vote, it was announced that Sisi, unsurprisingly, won the elections with % 97 of the votes.

These undemocratic course of events in Egypt were not surprising for many in the region. Neither were the reactions of Western states. While Egypt witnessed a guideline example of an undemocratic election process, the Western “democracies” such as the U.S. and the U.K. rushed to celebrate Sisi’s victory. Immediately after the election results were announced, U.S. President Donald Trump and British Prime Minister Theresa May called Sisi to express their support for the “democratization” process in the country. The Portuguese President Marcelo Rebelo de Souza even visited the country to congratulate Sisi in person.

The British Prime Minister’s words for the Sisi regime were of particular interest. During her phone call, Theresa May told that the election was an important step for Egypt’s transformation into a functioning democracy. She further suggested that the result of the election was proof of the Egyptian public’s confidence in their president, Abdalfattah Al-Sisi. May’s comments, which do not have any touch on reality were harshly criticized by many international observers. Critics argued that given the scale of human rights abuses, unlawful practices and oppressive policies conducted by the Sisi regime, Theresa May’s attitude would be considered as disregard to the Egyptians who suffer from this autocratic regime the most.

There are four basic motivations behind the support of U.S. and U.K. governments for the Sisi regime. The first is the fact that Egypt is a crucial partner for the regional interests of these countries. Secondly, Egypt constitutes a major ally with regards to the security of Israel. Third is the fact that Egypt is an irreplaceable actor in the emerging regional alliance between Saudi Arabia, the United Arab Emirates, Israel and the U.S. Finally, another important motivation for the Western support of Egypt is to prevent the increasing interaction between Cairo and Moscow. It has recently been observed that Russia has increasingly been exerting its influence in the region by deepening relations with Egypt.

The support of Western countries for such an autocratic regime in Egypt would bring costs for them. By neglecting Egypt’s serious problems and not urging the Sisi regime to pursue democratic reforms, these countries contribute to the continuation of political and economic problems in the country. They have been losing the confidence of millions of Arabs in the Islamic world by supporting a regime that ignores democratic values. This attitude will deepen the distrust between the people of the region and the Western governments in the long-run, as opposed to the repressive regimes of these countries.