Will the claims of corruption made against Netanyahu bring an end to his political career? 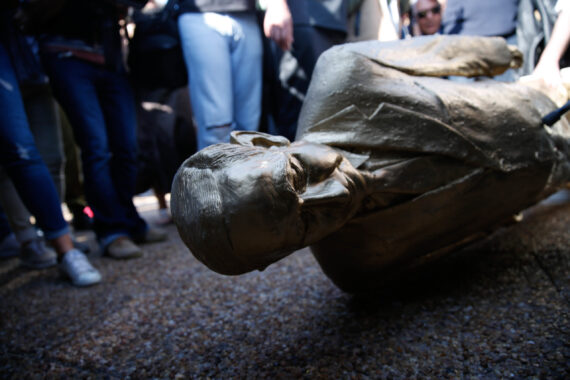 Statue of Prime Minister of Israel Benjamin Netanyahu is demolished by Tel Aviv Municipality due to unauthorized constructing in Tel Aviv, Israel on December 6, 2016. Anadolu Agency

The elections to take place in Israel were originally scheduled for November 2019. However, Trump’s decision to withdraw from Syria shifted the sensitive domestic political balance coalition between partners and therefore snap elections became inevitable. When Netanyahu noticed that he will not be able to obtain support for the Tall Bill proposal (military service exemption for Haredi students) from the Knesset, he had to declare the decision for snap elections to be held on 9 April.

This is not an unusual incident for Israeli politics. As can be remembered, the last elections were not held on the date they were scheduled either. But this time, something is different. New parties have been formed, some alliances have split, and new alliances are being formed. The opposition is working hard to confront Netanyahu’s Likud and overthrow him from the prime ministerial position. Netanyahu and his colleagues are obviously working to maintain their tenure.

Although the previous elections in Israel were not held on time, this time things are different. New parties have been formed, alliances have split and new alliances are being formed. The opposition is working hard to confront Netanyahu’s Likud and overthrow him from the prime ministerial position.

While there are many issues on the political agenda, the Israeli opposition are especially mobilizing on Netanyahu’s corruption scandals and the rumors surrounding possible prosecution. This issue is Netanyahu’s weakest point and therefore this pressure is making him act irrationally and disproportionately.

Does Netanyahu have a chance?

Although most of the polls still show Netanyahu to have at least 30 seats in the next Knesset, it is possible to say that he is not comfortable because his rivals are strengthening in power day-by-day. When the seats of other coalition parties are added, Netanyahu can reach a sufficient number to form the next government, with the contribution of Kulanu, Shas, and UTC. This means around 58-61 chairs, which is enough to gain a majority if everything goes right. But especially after Avigdor Liberman, chair of Yisrael Beitenu, resigned from the Ministry of Defense and left the coalition, the political environment has begun to reverse against Netanyahu. In fact, at this time everybody thought that the Israeli PM had overcome distressed times. However, Lieberman’s resignation ignited other initiatives coming from Bennett&Shaked.

Although Bennet slammed Netanyahu for the Gaza deal that he made with Hamas in 2018, and claimed that they were going to follow closely as to whether Netanyahu is really acting in the interest of Israel, the PM was able to overthrow these charges and continue with his politics with no harm. However, on December 19, the U.S. decision to withdraw from Syria broke the last resistance and Netanyahu had to announce a snap election. Due to the fact that both coalition and opposition parties noticed Netanyahu’s policy depended on Trump, they don’t have to endure Netanyahu anymore.

While Netanyahu is still the favorite candidate for the election, his last attempt to form an alliance with Bennet’s old party, Jewish Home, which merged with Kahanist Jewish Power (Otzama Yehudit) may cause a loss of centrist votes as some former members of Jewish Power have been prosecuted and arrested in the past. More, Kach Party, which was formed before Jewish Power, was declared as an illegal terrorist organization by Israel due to its involvement in the murder of 29 Palestinians in the Cave of the Patriarchs in Hebron in 1994.

If these swing votes do swing to the opposition, this would be vitally crucial for Netanyahu and may even cause him to lose the election. And when the AG Mendelbilt indict him before the election, everything may change fundamentally. It may even be possible not to see Netanyahu again in Israeli politics. Just like Olmert…

Who’s in the opposition bloc?

Before the appearance of Gantz, there was just the Zionist Union and Yair Lapid’s Yesh Atid as main opposition parties. Of course, we can add Joint List and Meretz to this list too, but they don’t have a game-changing effect. It is possible to state that an election would have been too easy for Netanyahu if the Gantz factor was absent.

Unavoidably, there is a crucial question that keeps emerging: Who is Gantz and where is he obtaining this power from? When the new party was established by former Chief of Staff, Benny Gantz, nobody knew anything about him. Now, Gantz’s party is the strongest party that can challenge Netanyahu’s Likud in the race to form the next government.

Who is Israel’s new popular politician Gantz and where is he obtaining his power from?

First, some rumors spread that Gantz’s ideology belong to the leftist political spectrum. However, we know him as Chief of Staff during the Gaza attack in 2014. Gantz was very close to Netanyahu as the highest ranking officer and has been said to have approved this conflict. While there might be some differences in their approaches about the killings, they cooperated to kill approximately 2000 Palestinians.

After Gantz retired from the army in 2015, he did not reveal his political stance. However, when the snap election decision emerged, mainstream media and elites expressed their support and hope in him. After he gathered guarantees, he clarified his political position as one in the center. Hereby, the new Resilience Party was formed. This name depicts Gantz’s optimal approach to Israel’s security and capacity. Because the original name of the party is “Hosen Leyisrael” in Hebrew, it has a dual meaning in English. The first meaning is resistance, and the second, resilience. After Gantz completed this first stage, he began to try to explain how his party differs from Netanyahu’s Likud. Now, current polls show that Resilience’s votes are close to Likud’s. It can be observed that he is about to successfully reach his first goal.

The other significant development occurred in the deadline of party registrations with the Central Elections Committee. Gantz and Lapid declared that they decided to merge a deal with the participation of two former chiefs of staff, Moshe Yaalon and Gabi Ashkenazi. The new formation was named Blue and White, referring to the colors of the Israeli flag. After merging together, some polls showed that this initiative was ahead of Likud. Their claims about Palestine is giving hope to many Israelis. However, recent events will allow for Netanyahu to shape the ultimate result. Voters will decide on whether to continue with Netanyahu and his corruption cases.

The other opposition party is the New Right, led by Naftali Bennett and Ayelet Shaked. They were the former leads of the current coalition partner, Jewish Home, but they left the party after the early election decision. The New Right is locating itself between the conservatives and centrists. In fact, they are open to all sides and may cooperate according to who will win. In spite of leaving the coalition, they have stated that they would not refuse to join the new government if Netanyahu invites them.

In addition, there were two major alliances in Israeli politics, but unfortunately both of them collapsed during the election process. One of them is the leftist Zionist Union (Labour and Hatnua) and the other is the Joint Arab List (Balad, Hadash, Ta’al and Ra’am).

After Isaac Herzog was selected as the head of the Jewish agency he had to leave from the party due to some disputes that occurred between its new leader Avi Gabbay and his partner Tzipi Livni. The Zionist Union has been losing too much power since 2015, and Gabbay was never accepted as a leader like Herzog was. Although Livni demanded to be the head of the alliance, her request was also not met. During this period some journalists also mentioned the possibility of a new future coalition between Livni and Lapid, but that Livni did not receive an official offer, and therefore retired from politics. Hereby, former minister of foreign affairs Livni, while desiring to take part in the government again, lost her own party and had to end her political career.

Is change possible in Israel after the elections?

The latest polls show that the election race will pass between two main political blocs – on the one side, current prime minister, whose tenure has not been interrupted for the last 10 years, his Likud and longtime comrades (Kulanu, Jewish Home, Shash, UTC), and on the other, Blue and White Party lead by Gantz and Lapid. It can be stated that it seems like Netanyahu’s bloc is one step ahead. However, when AG declared to indict Netanyahu due to his three corruption cases, this advantage disappeared. Now, Blue and White may take advantage of this situation and mobilize it as a chance to overthrow Netanyahu.

Whoever will become the next prime minister, the basic fundamentals of Israel’s domestic and foreign policy are not going to change fundamentally. Some negligible issues may differ if Gantz & Lapid win. If the next government decide to construct a deal with the Palestinian side, then this is when we can expect some change. While Gantz’s last statements gives us some hope in this regard, we cannot be assured without seeing these promises being fulfilled.