Social Democracy is a Distant Island: Should CHP Dissolve Itself?

As one pro-CHP surveyor once stated; “even if Ismet Inonu or Bulent Ecevit were to lead the party today, its votes would not exceed 35 percent.” 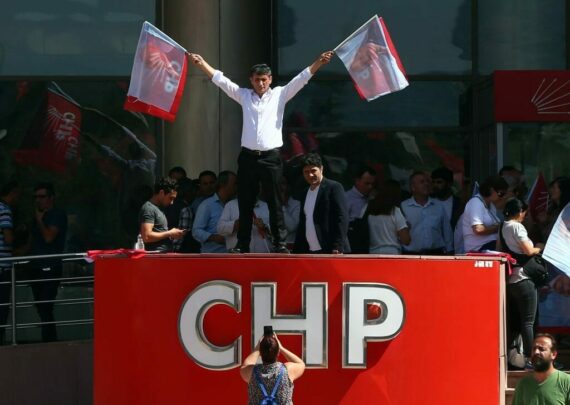 Since the elections held in Turkey on June 24, Turkey’s “social democrats” have been – once again – facing internal chronic problems. It was merely just a matter of time and how a new power struggle within Turkey’s main opposition and oldest political party – the Republican People’s Party (CHP) – would occur again.

Previously, my elaboration was that Muharrem Ince’s nomination as the party’s presidential candidate was only a strategic maneuver by the party leadership and Chairman Kemal Kilicdaroglu himself in order to exclude Ince in the long run from the party’s future. It was clear that Kilicdaroglu knew that neither his party nor the party’s alliance was going to achieve a majority in parliament. He was also aware that his party’s candidate was not going to win the presidential race. Indeed, Ince lost in the first round.

Nevertheless, Ince subsequently described himself as successful by comparing his 51-day performance with the performance of the CHP. Kilicdaroglu refuted these claims indirectly, while not addressing his party’s overall disastrous election results. In this sense, the current CHP chairman, who lost nine elections in eight years, still insists on keeping the party’s chairmanship, while accusing Ince without directly calling out his name.

Kilicdaroglu also slammed his party fellows ironically for “selfish interests,” stressing his criticism with the words, “some people eye for upper positions, which is unacceptable.” Furthermore, the demand for an extraordinary party congress by the so-called supporters of Ince has ultimately revealed the already known competition between Kilicdaroglu and Ince. Although supporters of Kilicdaroglu reject a congress by arguing that the party should focus on the upcoming local elections in 2019, others – and particularly CHP sympathizers on social media – are calling for “change.” Within these circumstances, party officials have been carrying an inner-party struggle for over two weeks.

But what’s the main problem in Turkey’s main opposition party, which used to be called a “social democratic” political party? If one focuses on the party’s membership and electoral profiles, one notices the striking fact that in contrast to its “social democrat” label, CHP voters prefer attributions and descriptions such as so-called Ataturk-focused ultra-nationalism and a historically well-known aggressive secularism (perhaps similar to the French laïcité). But, do these two components count as enough to describe the party as social democratic in a modern and contemporary sense?

Most of the CHP electorate do not have any problem with being described as “left-nationalist secularists.” However, in the sense of a universal understanding of social democracy, this kind of definition may not be well-fitting. In addition, when focusing on the country’s voter dynamics, it seems that elitist circles and capital owners in particular prefer the CHP as a harbor of political identity, and not as an instrument to pursue social democratic objectives – as it is usual in an average democratic country. With regard to its policies concerning, for instance, refugees, the CHP unfortunately resembles European far-right parties, aiming to forcefully send refugees back to their war-torn countries.

It seems that one of the main problems within the CHP and in particular some other Turkish parties, which insist on being an identity party, is the fact that regardless of losing elections, their party chairperson does not leave office. If one compares this phenomenon with, for instance, the German social-democrat chairpersons in the last 13 years, one notices that following losses in the general election, most of the leaders resigned. Just recently former SPD leader resigned due to his lack of success in the 2017 elections. This happened despite his “success” to form a subsequent coalition government with the Christian Democrats. The party decided that he ought to step down, which may not be imaginable for Turkey’s CHP – even though the Turkish social democrats permanently point to German or Western democratic standards. In such cases though, the practices of global social democrats are dis-regarded.

“Even if Ismet Inonu or Bulent Ecevit were to lead the party today, its votes would not exceed 35 percent”

In regards to the CHP, the main problem is not solely the person who leads the party. As one pro-CHP surveyor once stated>; “even if Ismet Inonu or Bulent Ecevit were to lead the party today, its votes would not exceed 35 percent.” This may be true due to the party’s historical and political “baggage.” Thus, what can be done to solve this chronic perception? If the CHP wants to overcome its permanent crisis, a comprehensive self-criticism regarding the party’s past, its existential meaning and its future goals seem indispensable. However, transforming the Kemalist and left-nationalist CHP into a modern social-democratic political party seems very difficult. This is because denying the party’s anti-democratic past is perceived as unacceptable for most CHP sympathizers. Though, Turkey’s societal dynamics and the majority of political preferences of the country’s voters regularly point out this fact.

Thus, perhaps a better option could be dissolving the party, as Atilla Yayla, professor for political science, proposed in 2013:

“The CHP does not allow, for instance, being democratic such as the German social democrats. Neither does it allow the transformation into a democratic social democratic party, nor does it give the opportunity to other movements to create a strong left-democrat party. Regarding such a party, there is no meaningful and legitimate place in a democracy. The CHP has to be closed down. I do not imply that the Constitutional Court should ban the CHP but the CHP should dissolve itself. The CHP should either transform itself into a foundation or a museum concerning the “single-party-regime.” Then, the void left from the CHP should be filled by real democratic social democrats who start a strong political movement.” (Atilla Yayla, August 1, 2013)