The Konya 2021 Islamic Solidarity Games were concluded in August 2022, yet their end marks the beginning of a new understanding. 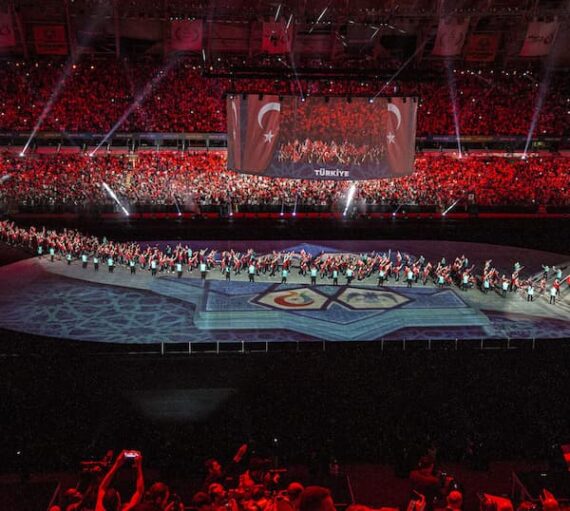 he Konya 2021 Islamic Solidarity Games were concluded in August 2022, yet their end marks the beginning of a new understanding. Türkiye has united all Muslim countries through sports, which has never simply been a random series of activities: it has always held the potential to serve a greater purpose—solidarity. That being said, we should examine the key notions to understand better what solidarity through sports actually means.

The Sports Aspect of Diplomacy

It is well known that political institutions and organizations utilize multiple tools and apparatuses to pursue their goals. Information technologies and globalization opened the way for further influence to resonate through multiple channels, targeting different audiences. Political authorities benefit from this ever-growing scope of interaction as well. In fact, political authorities have been generally successful in adapting to utilizing new instruments and opportunities, including the expanding reach of diplomacy that has grown exponentially to include a wide range of activities within its scope.

Any event can be considered an act of diplomacy as long as it contains diplomatic elements. Even a coffee break can create a diplomatic moment. Both the environment and the topic of a meeting can affect the process and outcome of diplomacy. In other words, means and context are highly linked and are intertwined with the results of a diplomatic act. Undoubtedly, in a peaceful context, diplomacy can flourish better.

Turkey's youth and sports minister, Mehmet Muharrem Kasapoglu makes a speech during a signing ceremony of the hosting city agreement of The Islamic Solidarity Games, in Konya, Turkey on December 19, 2019. Photo by Abdullah Coşkun. Anadolu Images.

Especially in the last decades, sports diplomacy and its positive impact have led politicians to choose such peaceful events for diplomatic purposes. Fun and entertainment have proven their significance for diplomacy long ago. Singing contests and international tournaments are the most known examples.

Sports and games are among the best tools of diplomacy with international attraction and a huge networking capacity that brings many nations together, with or without historical ties, for friendly competition. These are the features that diplomacy looks forward to harvesting. Every international game is a potential diplomatic gathering. High-level politicians, usually ministers, come together on the occasion of sports and exchange ideas, giving messages of unity.

Konya: Sports and the City

Famous travelers talk about the spirit of places in their travelogues. Like humans, cities are also born, grow up, and have certain sui generis features. This usually occurs in a process whereby a people and location shape each other mutually. Peoples and cities form unities with distinctive characteristics. In this manner, sports events are affected by the nature of cities where they are held, while at the same time they affect the city in return. Many factors such as history, nation, and geography play decisive roles in this formation.

Konya has undergone the same process. Gracious people of former times came together, as we did today, and created a new event to provide this need. Scholars, politicians, good-willed locals, and many other sound-minded people convened in Konya and provided something new to the world and gained people’s trust by standing together.

Players of Turkiye celebrate after men's football final match between Turkiye and Saudi Arabia as part of the 5th Islamic Solidarity Games in Konya, Turkiye on August 16, 2022. Photo by Mustafa Çiftçi. Anadolu Images.

Thanks to their cooperation for a fair world, Konya Province blossomed as a center for solidarity, protection, and peace. The spirit of unity was so strong that throughout generations, it gathered many poets, dervishes, and scholars that helped this spirit resonate even further.

Tracing back history provides strong clues about what we do today and why we do it. The Islamic Solidarity Games can be seen as the most recent addition to the chain that links the present with the past. We, as the Ministry, work for solidarity and aimed to unite people, once again, in Konya. Despite ill-intentioned political authorities across the world that don’t abstain from utilizing harmful means, we strive for peace and harmony with tools that promote the spirit of solidarity. Remember—there is always darkness, it is light that endeavors.

Konya as the Sports Capital of Muslim Countries

Games have evolved in parallel with the evolution of human society. The Olympics took their present shape after public diplomacy became involved. Diplomats, politicians, and policymakers began to see games as an opportunity to create new connections and form new alliances. In this way, games came to serve the purposes of the former.

The Islamic Solidarity Games are one of the best examples of this. On an individual and country level, the games attracted the highest attendance so far. The games accomplished multiple goals at once with the ultimate aim of creating unity among Muslim countries.

Fifty-four countries joined the games and athletes from these countries competed for medals. The Konya Games were also accompanied by academic and cultural activities carried out by academics and experts from across the world.

Konya was furnished with optimal infrastructure and superstructure, as well as human capital. In other words, the games have influenced the city permanently. Konya was chosen as the “Sports Capital of Muslim Countries” and gained a new dimension for its harmonic spirit. The games refreshed the spirit of the city and reminded everyone of its legacy, as well as its vision for the future.

The Konya 2021 Islamic Solidarity Games are a multidimensional event. The collective structure of the games, and any event carried out by our Ministry, lets people draw their own conclusion. A volunteer working for the games’ organization may regard the games completely differently than an athlete or a politician. This pluralism is a highly positive asset which we purposefully sought.

The games were a huge success for us. Not only for the medals or records, but also for successfully executing a nine-day-long event that gathered various people who came from thousands of kilometers away and who spoke different languages, but were united by the language of sports. When we speak of solidarity, that is what we mean: our ability to surpass our differences and all obstacles, and come together as one.