After the U.S. decision to withdraw troops from Syria, leaders from the Arab world have announced their intention to re-establish ties with the Syrian regime. 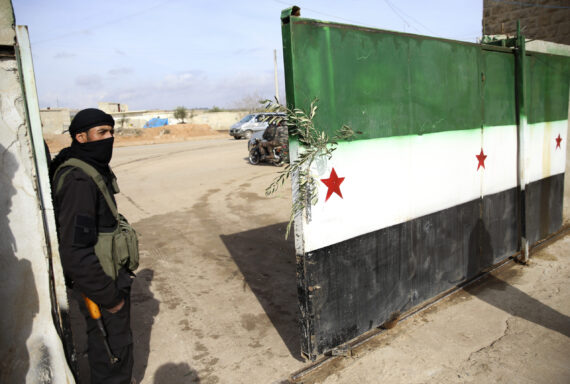 An olive branch is seen on a door as people from Azez district organized a convoy in support of "Operation Olive Branch" launched in Syria's Afrin by Turkish Armed Forces and Free Syrian Army (FSA) in Aleppo, Syria on February 14, 2018. Anadolu Agency

Since President Trump’s decision to withdraw troops from Syria, Turkey has intensified preparations to start a military operation, which was announced before Trump’s decision, to the East of the Euphrates River. According to reports from the ground, 15,000 soldiers from the Free Syrian Army near Manbij – backed by the Turkish Armed Forces – are waiting for Turkey’s signal in order to begin the operation.

Last weekend a Turkish delegation of top bureaucrats and the Turkish Foreign Minister, Mevlut Cavusoglu, had a meeting with their counterparts in Russia in order to discuss new developments in the region.

After the meeting, Cavusoglu said that Turkey and Russia have a common will on clearing all the terrorist groups from Syria. During his comments after the meeting, Russia’s Foreign Minister also emphasized that the Russian administration agreed with Turkey on the coordination of troops in eliminating the terrorist threat in Syria. Lavrov added that both sides agreed on intensifying their efforts to provide the necessary conditions for Syrian refugees to return to their homes.

Another development after the withdrawal decision is the diplomatic moves by some Arab countries. Until the withdrawal decision of the U.S., and during the whole crisis in Syria, almost all Arab states cut their relations with the regime in Damascus. However, after the U.S. decision, announcements of re-opening embassies and ‘warm’ messages towards the Assad regime followed each other.

Both the UAE and Bahrain closed their embassies in 2011 – the beginning of the Syrian Civil War.

The Tunisian President, who has already permitted direct flights to Damascus from Tunisia, has invited Assad to the Arab Union Summit in March.

Anwar Gargash, the UAE’s Deputy Foreign Ministry, tweeted on December 28 that an Arab role in Syria is ‘now’ necessary in order to face Iranian and Turkish intervention in Syria.

Sudan’s President Omar al Bashir was the first Arab League leader to visit Syria (on December 16) in an official meeting since the beginning of the civil war.

Yesterday, Kuwait’s Foreign Ministry stated that ‘more Arab countries are to re-open their diplomatic missions in Damascus’ in the coming days and that Syria’s re-admission to the Arab League is being ‘examined.’ However, the statement also added that the unanimity of 22 members of the Arab League is requested. The Arab League’s permanent representatives are due to meet in Cairo on January 6.

The re-opening of the embassies and the possibility to re-admit Syria to the Arab League have been interpreted as attempts to limit both Iranian and Turkish influence on the ground in Syria since the U.S. withdrawal will leave a power vacuum in the region.

Finally, the regime in Egypt is said to have contacts in Manbij according to some security sources. The sources claim that the Egyptian delegation was accompanied by a delegation from the United Arab Emirates.

News agencies reported that a ‘closed’ meeting was held between the Syrian chief of security, Ali Mamlouk and the Egyptian chief of intelligence, Abbas Kamal, in Cairo on December 21.