SPD’s Uninspiring Elections Will Lead to No Change

In the next weeks, SPD members will ultimately have a new chairperson on whom party members will set their hopes. However, in reality choosing new leadership will not guarantee that the existing obstacles within the party, and dismal predictions at the ballot will find any resolutions. 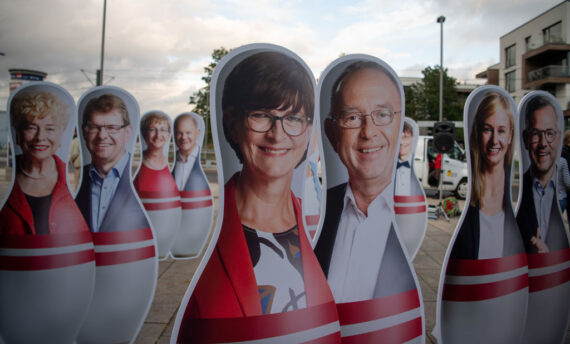 The Social Democrats of Germany are still searching for dual-leadership from which they hope to escape from the party’s current lack of perspective and prospects. Given the results of the Thuringia state elections, the once strong centrist party of Germany is increasingly heading towards becoming a marginal one, which will most likely have serious difficulties in achieving the five percent voter threshold at the state level, and perhaps also at the federal level. As I previously addressed, Germany’s Social Democrat Party (SPD) has had a fundamental problem of maintaining its chairpersons. The party witnessed several chairpersons who were not able to receive the necessary support both from the party’s base and leading figures in the party’s senior circles. Even despite this, since 2013 the SPD has interestingly insisted on continuing to be the junior partner of Chancellor Merkel’s grand coalition governments.

In the last 24 months, the party had an overrated chairperson, Martin Schulz, who became SPD chairperson with 100 percent of the party’s votes, but resigned subsequent to the party’s federal election losses in September 2017. Then, Schulz’ successor Andrea Nahles, became the first female chairperson of the party in its more than 150 year history. However, due to several failures and miscalculations regarding the state elections, during which the SPD faced and still faces a decreasing and catastrophic voting trend, Nahles also resigned as chairperson.

The party then decided to elect its chairperson through a vote of all of its 420 thousand members. Currently, the party is being led by an interim leadership-trio. For the first time, several co-candidates declared their candidacy. Approximately 53.3 percent of the SPD members voted in the election, in which twelve co-candidates ran. However, no candidate was able to achieve an absolute majority in the first round. Consequently, a second round of voting will be scheduled between 19 and 29 November. Following this date, the results of the winning duo will be declared at the SPD party convention in early December. The interesting point is that on this convention day the SPD will also decide their future as part of the grand coalition as well.

The current Finance Minister and Vice Chancellor Olaf Scholz and his running mate, Klara Geywitz, received most of the votes (22.68%) in the first round, followed by Norbert Walter-Borjans and Saskia Esken (21.04%). Resulting in both of these duos achieving the right to run for the party’s new co-leadership in the second round.

Polls indicate that 37 percent of members want to see Walter-Borjans and Saskia Esken as the party’s new co-leaders, while only 25 percent support Scholz and Geywitz. However, 38 percent of those polled do not support any of the co-candidates. On the other hand, leading political figures such as the SPD’s current foreign minister Heiko Maas, or the former chairperson Martin Schulz, have recently declared their support for the Scholz-Geywitz duo. Similarly, media outlets also suggest that Germany’s current Finance Minister Scholz is the favorite to lead the SPD together with Geywitz.

In the next weeks, SPD members will ultimately have a new chairperson on whom party members will set their hopes. However, in reality choosing new leadership will not guarantee that the existing obstacles within the party, and dismal predictions at the ballot will find any resolutions. But the fact that Maas and Schulz, prominent figures of the SPD, have shown support for Scholz and Geywitz, indicates the possibility of a continuation of a political line which may not be not so attractive from the point of view of voters seeking more promising change.

It is also very debatable whether the current method of electing a new chairperson of the SPD is the best one. It does not seem very convincing that a new top-leader and a potential candidate for chancellor will emerge with this kind of extended and unexciting election process.

Finally, it is a fact that the German Finance Minister Olaf Scholz only narrowly received most of the votes during the first round, which then triggered the second round. This indicates that all of the SPD’s candidates have a similar support rate, and further suggests the lack of a new and exciting mood within the party. In reality, any potential successful chairperson of a major centrist party will have to deliver much more than what Social Democrat circles are currently offering. It is clear that the current mood and choice of candidates signal that there will not be any extraordinary changes for the SPD in general, which hardly seems an appropriate development to stem the tide of voter dissatisfaction and a growing right-wing populist trend.