Jamal Khashoggi, a Saudi journalist and a contributor to the Washington Post, entered the Saudi consulate in Istanbul on Tuesday afternoon and has not left since. 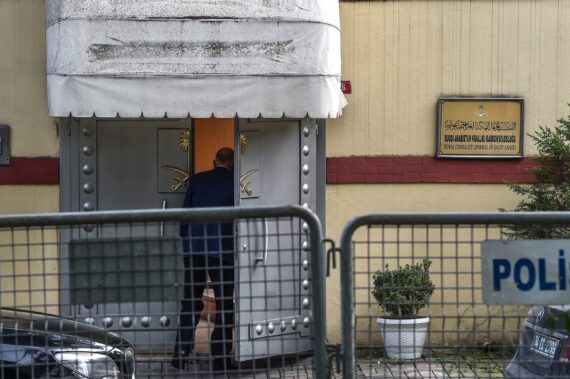 Jamal Khashoggi, a Saudi journalist and a contributor to the Washington Post, entered the Saudi consulate in Istanbul on Tuesday afternoon and has not left since.

According to the Washington Post, Khashoggi went to the consulate to complete “routine paperwork,” which was required for him to be able to marry his Turkish fiancée. The couple were intending to marry next week.

Although accompanied by his fiancée, Khashoggi went into the building alone, as his other half was not allowed in with him. As normal proceedings in consulates and some embassies, Khashoggi was required to surrender his mobile phone.

During a press conference on Wednesday, Presidential spokesperson Ibrahim Kalin stated that “According to the information we have, this person who is a Saudi citizen is still at the Saudi Consulate in Istanbul. We don’t have information to the contrary.”

However, a statement released by the state-run Saudi Press Agency briefly read, “The consulate confirmed that it is carrying out follow-up procedures and coordination with the Turkish local authorities to uncover the circumstances of the disappearance of Jamal Kashoggi after the left the consulate building.”

Turkey and Saudi Arabia have been on edge since the Qatar crisis, as the two states differentiate in their interests in the region. The ambiguous disappearance of Kashoggi is the latest incident that will inevitably affect relations between the two countries.

Khashoggi was a critique of the King Salman in Saudi Arabia and argued that while the Kingdom is in need of reform, a one-man rule is “bad” for the country.

Also Read
Turkey and Israel: A Marriage of Convenience and Necessity?