The Euphrates Shield is intended to create a terror-free zone cleared of Daesh and PYD/PKK terrorists by the setting of a security zone between Jarabulus and Azaz within 40 kilometers of northern Syria. 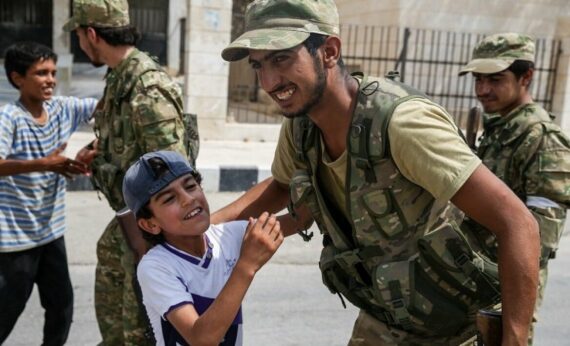 The Euphrates Shield is intended to create a terror-free zone cleared of Daesh and PYD/PKK terrorists by the setting of a security zone between Jarabulus and Azaz within 40 kilometers of northern Syria. This area is exactly the same as Turkish officials suggested to their American counterparts two years ago. However, over that time, two major obstacles to putting this project into practice emerged: first, the US policy shift from supporting the Syrian moderate opposition to the PYD/PKK; second, the tension with Russia following the jet incident.

SecurityBy Serhan Afacan
Here, the questions are how much of this area is strategically important to Turkey and what the strategic success of the operation would be. There are three major factors with regard to these questions. 1) Daesh threat against Turkey. Daesh attacks along the Turkish border from northern Syria have recently intensified and these are directly related to the military developments in northern Syria. 2) PYD/PKK threat to Turkish national security. The PYD, the Syrian branch of PKK, has consolidated its power in northern Syria, which has encouraged PKK terrorists to geographically spread its violence over the Turkish territory. 3) The growing refugee problem in Turkey. The country continues to shoulder the heavy burden of 3 million Syrian refugees and the concomitant social and economic problems. In fact, Turkey had little choice but to liberate the area controlled by terrorists and move some of the refugees into their homeland in Syria. Therefore, the open-ended Operation Euphrates Shield rests on two military contexts: it is an offensive operation to liberate the projected targets from Daesh and PYD/PKK, and it is a stability operation to provide a secure zone for those who seek refuge.Now, it is better to focus on the current stage of the Euphrates Shield. So far, the Free Syrian Army (FSA) and Turkish forces have liberated a significant amount of territory and the offensive operation is expected to continue until the whole territory within the area of operation is completely liberated from Daesh and PYD/PKK terrorists. The primary target of the operation is undoubtedly Daesh, but once Daesh is defeated, the PYD/PKK will have the chance to rush into the liberated lands and to colonize them. The aggressive territorial expansion of the PYD/PKK makes the current operation more vital for Turkish security as much as for the local Arab and Turkmen populations.

Having secured the strip from Jarabulus in the north all the way to the Sajur River, 15 km to the north of Manbij, the FSA has now focused on Daesh-occupied territories in the west. This means that the march into Manbij has been currently postponed. The offensive operation against Daesh is anticipated to reach the line between al-Rai and al-Bab. The fiercest battle to be fought in this campaign against Daesh is expected to occur in the vicinity of the al-Bab district and its outskirts. As the westward move of the FSA continues, more Turkish tanks and mechanized battalions accompany them. This operation is also backed by the coalition air force during the march against Daesh positions.

Tactically, Turkish ground forces are formed in armored Battalion Task Forces (TF) as part of a brigade. Combat units consist of tanks, mechanized infantry, anti-tank, artillery, and air defense capabilities. Battalion TFs are the most important maneuver units for dominating ground battles by promptly responding to emerging threats and shaping the security environment. FSA soldiers are equipped with small arms and mounted on light sport utility vehicles to carry out the mission of seizing the intended targets.

Daesh and the PYD/PKK carried out numerous offensive activities against each other before the FSA and Turkish offensive operation began. Now they are both stable, and are digging in their positions to prepare a defensive stance. Al-Bab is fortified by Daesh and Manbij by PYD/PKK. The defensive actions of the terrorists being used in preparation to take advantage of the terrain in ground battles. The first element of exploiting the terrain is to secure the positions of fields of observation and fire. Both al-Bab and Manbij are covered by fixed weapon positions that have a range of 5,500 meters of direct fire. The direct fire weapons are the anti-tank guided missile (ATGM) of MILAN for the PYD/PKK and the 9M133 and 9K129 Kornet missiles for Daesh. So far, 5 Turkish tanks have been hit by these weapons, leaving 4 Turkish soldier dead and 10 others wounded. While the total number of ATGM that the PYD/PKK owns is estimated at 300, the number owned by Daesh is unknown. The mortar shells of both terror organizations could be effective against the FSA moving with light SUVs, but the positions of these weapons can be easily detected and engaged by Turkish or coalition air force elements, or the Turkish long-range Fırtına guns.

The second element of the defensive activities in al-Bab and Manbij is cover and concealment from FSA/Turkish observation and fire. Both terror organizations are expected to position themselves in urban areas inhibited by civilian populations. Al-Bab is populated by thousands of civilians and the population cover will presumably be the major factor of Daesh’s defense. On the other hand, the PYD/PKK has moved some civilians from the eastern bank of the Euphrates into Manbij to cause civilian casualties during an FSA/Turkish offensive. Moreover, some US Army Special Forces ODAs have also moved to Manbij to provide ally cover for the PYD/PKK, a human shield made up of US soldiers.

The third element is the obstacle to stop, canalize, or divert the FSA/Turkish offensive. Since the terrain around al-Bab and Manbij is bare, very few natural obstacles are set in the paths of FSA/Turkish advance. This means that both Daesh and the PYD/PKK have begun to set a series of mine fields. Since both terror organizations have very limited anti-tank landmines, they are expected to employ huge numbers of IEDs along most possible avenues of FSA advance. In fact, both terror organizations are highly experienced in using IEDs.

The fourth factor are the key terrains. Urban areas, roads, high ground, and bridges around al-Bab and Manbij are vitally important for both terrorist groups if they still intend to withhold the cities that the FSA/Turkish offensive aims to liberate. The road between al-Rai and al-Bab is of particular strategic importance for the FSA/Turkish advancement and provide supplies to the vicinity of al-Bab. The towns of Hazwan, Sozan, and Qabasin around al-Bab and the interconnecting roads are also critical for the FSA/Turkish offensive to break the resistance of Daesh. On the other hand, the roads between al-Bab and Manbij and the town of Arima are in key positions for the offensive in that they form the southern line of future stability operations.

The FSA/Turkish forces expect to seize Manbij in a peaceful way with the help of US-Turkish relations; however, a political and armed resistance is expected from the PYD/PKK, which also aims to jeopardize the strategic relations between Turkey and the US. Karakozak Bridge is the main supply connection between Manbij and the eastern bank of the Euphrates, and it is expected to be the number one key terrain to seize in the case of the PYD/PKK resistance to withdraw from Manbij.

As is understood from the elements of the terrain assessment, the first four elements will shape the FSA/Turkish advance into al-Bab and Manbij. The momentum of the Euphrates Shield is related to this. Other than Daesh and PYD/PKK direct actions against the FSA/Turkish advance, there are two possible threats: first, friendly fire casualties from the reluctant coalition air force; and second, the US Army Special Forces manipulations around Manbij.

Undoubtedly, the FSA/Turkish forces are capable of liberating the lands from the terrorist groups, if no international political strings are attached. However, the biggest challenge is endurance and, after the projected area is liberated from Daesh and the PYD/PKK, the presence of the FSA/Turkish forces for a period of time will be needed to guarantee stability. The success of the current offensive can be considered a threshold to the strategic success, but the real achievement will be the future of the stability operation that will shape the political environment as well as its capacity to respond to possible crises.