The Freedom and Change Forces announced on July 19 that the text for peace in Sudan will be included in the constitutional declaration, which is to be declared in the upcoming days. 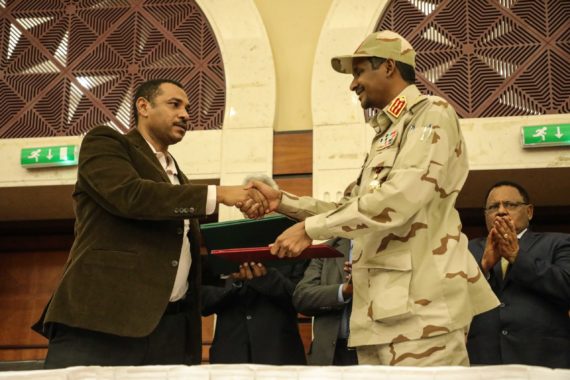 The Sudanese massacre of the general command that took place on June 3 was followed by a massive series of global condemnations against the Sudanese Transitional Military Council (TMC) that promised to relinquish power to civilians within two years – a proposal that was rejected by protestors. The sit-in break up came after months of mass demonstrations and protests called for the departure of the TMC as well as the formation of a civil government.

The TMC, which was running the country at the time, was responsible for the worst bout of violence since Al-Bashir was ousted as president in April. The massacre resulted in the death of over 100 people, and hundreds of people were wounded. Bodies of the protestors were said to be disposed in the Nile near the site of the protest sit-in.

After severe pressure from the international community against TMC and the continuing protests, the talks between civilians and the junta resulted in the formation of a joint provisional government including both civilians and military soldiers. However, on May 3, the seven-member-TMC headed by General Abdel Fattah Burhan rejected a civilian majority in the council. This led to the failure of the talks.

On May 7, both the United Nations and the African Union declared their backup for a civilian-led transitional government in Sudan. They also described the rule of the TMC as unacceptable, but added that the military could be part of the civilian government. The African Union initially gave the TMC a 15-day period to leave power. This was later extended to 60 days.

On May 14, the TMC had agreed with the Forces of Freedom and Change (FFC) declaration that the transition period for Sudan will last for 3 years. This decision came after a long time within which the TMC insisted for determining a maximum of a two-year transition period. The opposition alliance wanted a four-year period. However, on May 15, instead of achieving an agreement over the formation of a new body to cover the country within the transitional period, the TMC suspended talks with the opposition alliance for 72 hours.

On May 16, the British ambassador, Irfan Siddiq asked the junta to resume talks with the Sudanese protest leaders.

On May 19, the talks resumed but due to the failure of both sides to reach a deal, the talks stalled and the protest umbrella group called for a protest calling for a civilian majority council to govern the country. The reason why these clashes occurred is because both sides wanted to have a majority of the council to rule the country throughout the transitional period.

Between 24 and 26 of May, leaders of Sudan’s Military council visited the 3 meddler countries in Sudanese affairs – Egypt, Saudi Arabia and the UAE. The visit was met by mass protests in Sudan, which were dispersed by Sudan’s Rabid Forces.

On May 28, the opposition had called for a two-day protest to put pressure on the TMC to hand over power to a civilian government. The strike came after claims made by the military council, which accused protest leaders of not wanting to share power.

On May 31, the TMC threatened to take action against the protest camp, which it sees as a threat to Sudan’s national security.

The UK ambassador to Sudan condemned the violence and called for the resumption of transition talks among the two parties toward a civilian government in the sake of reaching stability in the country.

On June 3, the visit took place almost a week before more violence occurred against peaceful protestors. The massacre was met by severe condemnations and convictions from so many countries around the world. The incident also led to the suspension of talks by the military.

On June 4, right after the massacre, the military council cancelled all reached agreements with civilians and called for holding elections within 9 months – a proposal that was refused by the Sudanese opposition coalition leaders. Sudan’s Transitional Military Council said on the same day that it cancelled all previous agreements with the main opposition coalition and called for snap elections following deadly violence in the capital Khartoum after security forces moved to disperse the main protest camp outside the defense ministry.

The Declaration for Change and Freedom is considered as the umbrella body for Sudanese protests and has announced that no talks will take place without the presence of a third party, as they declared that they lost confidence in the Council on June 15. They also announced that they had informed the Ethiopian prime minister their unwillingness to resume any talks with the junta in the absence of a third party. They expressed their refusal to the one-sided investigation upon the break-up of the Khartoum sit-in, calling for an international investigation to be opened before the return to talks with TMC.

With the mediation of the Ethiopian prime minister together with the African Union, the suspension of talks among the two parties reached to an end.

On 18 June, for the first time since the dispersal of the protest that took place outside the defense ministry, the military council announced its willingness to resume the transition talks with Freedom and Change forces, while expressing their readiness to start the democratic transition process in the country. The council leader also stated that the opposition alliance should engage in the talks without any preconditions.

On 24 June, the spokesman of the Sudanese military junta announced that they received two different proposals from the African Union and Ethiopia, which were to be put under study by the Council – although they agreed with them to send a joint proposal instead of two separate ones. This called them to come up with a brand new joint proposal in order to facilitate the matter. The military declared its denial for the Ethiopian proposal, as they claim that it was from only one stakeholder. The Ethiopian proposal includes a civilian majority transitional government as well as the formation of a legislative body, which was to include 300 lawmakers from which 67 percent were to be from FFC declaration while the rest were to be chosen from different groups (apart from Al-Bashir’s party).

By sending its envoy to Sudan on 20 May, Eritrea became the second country to send its delegation to Sudan after Ethiopia.

On 24 June, their delegation had a meeting with the TMC, which was warmly welcomed by the junta council. They also expressed their support to the military as well as the Sudanese protestors.

On 27 June, the opposition alliance declared that they received a new transition proposal from the AU and Ethiopia, which was a joint one this time. The proposal called for the formation of a 15-member civilian majority ruling council that was supposed to rule the country for a three-year period. However, the proposal did not mention the formation of a new parliament to operate during the transition process. The proposal found support from the UK as their envoy to Sudan called for the two parties to accept the joint proposal presented by the AU as well as Ethiopia.

On 4 July, the Freedom and Change forces made a decision to engage in direct negotiations with the Military Council after accepting the official invitation that came with the AU-Ethiopian mediation. However, the opposition alliance in Sudan said that the Transitional Military Council “excluded” political parties by negotiating with the forces of the Declaration of Freedom and Change only, and not with other opposition groups.

On July 11, Sudan had witnessed a coup attempt that was said to be taken place by a group of retired officers. It was foiled successfully. The council declared after the failed coup attempt that it was a trial to undermine the so-called “power-sharing” deal reached between them and the opposition alliance.

On July 17, the Military Council and the opposition met in Khartoum  in order to sign the power-sharing deal that was reached among them, after a 3-day postponement, which put an end to the months of transition talks between the military junta and the FFC declaration. Afterwards, the two parties spent the day over discussing some details related to the signed agreement, such as the formation of a new transitional civilian administration as well as the constitutional declaration that is to define the duties and responsibilities of the sovereign council, which will lead the country for 3 years according to the signed agreement.

The constitutional declaration was said to be made on July 19.

The deal stipulated that the new transitional council will be formed of 11 people – 5 soldiers from the current Transitional Military Council and 5 civilians from Freedom and Change Forces, and 1 person will be chosen among the two parties. There will also be a general who will be the head of the council for 21 months, and who will later be replaced by a civilian for 18 months. After this, an election will be held.

The two sides agreed on the formation of an independent technocratic government and on the launch of an independent, transparent investigation into the violence that broke out against protestors. They also agreed to postpone the establishment of a legislative council until the sovereign council and the civil government are established. The new prime minister will also be chosen by the FFC declaration, according to the criteria that will be defined in the constitutional declaration. A cabinet of twenty ministries will be named by the prime minister. The defense and interior ministries will be placed by the military council.

On July 18, the Armed Movement declared their reservations about the agreement signed between the TMC and FCF, declaring that the deal does not meet the aspirations of achieving comprehensive peace in the country. Malek Akar, leader of the Sudan People’s Liberation Movement, had announced his appreciation to the signatories but stated that the agreement ignores important issues that were discussed in Addis Ababa. “We are for the Forces of Freedom and Change, and this agreement will lead to different positions,” Akar said.

On July 19, the Freedom and Change Forces announced that the text for peace in Sudan will be included in the constitutional declaration, which is to be declared in the upcoming days.

On July 24, the Transitional Military Council announced that it arrested at least 16 superannuated and active military officers upon the foiled coup attempt that took place on 11 July. The failed coup attempt was said to be made by the army chief alongside with the armed forces, the national intelligence and security service, as well as some leaders of the Islamic Movement and the National Congress Party.

It is said that General Hashim Abdel Muttalib Ahmed, head of the joint chief staff, was among those arrested by the TMC over the coup attempt.