The determination of the youth in Sudan for democracy and the military’s obstinate cling to power are swinging the country’s future in two directions gradually making it more uncertain to know what the future holds for Sudan. 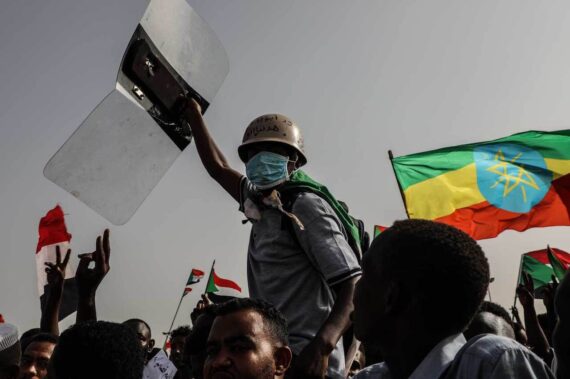 Demonstrators gather to commemorate those who lost their lives in the anti-regime protests and demand punishment for those responsible at the Green Square in Khartoum, Sudan on July 18, 2019. AA

On December 2018, the government of Sudan increased the price of bread from one Sudanese pound to three (0.12 TL to 0.37). Little did the government know that this hike in bread prices would engender national outrage and protest which in time, would morph into a regime changing revolution. Across Sudan, ATMs would only give 500 Sudanese pounds (equivalent to 62 TL) per day, barely enough to meet daily necessities. Currency inflation rose by 70 percent. There was a hike in fuel prices, and tragic and mournful events including loss of the lives of 22 children. All of these events cumulatively added an extra spark to that emerging protest. The protest first started in the city of Atbara in north east Sudan. The protesters torched the headquarters of the ruling National Conference Party. It was declared “an act of vandalism” by the government, which then declared a curfew. The protest rapidly spread across other cities and the government responded with further and stricter curfews. The Sudanese people defied the curfew and continued to show their dissatisfaction with how the government was running the country. The government declared a state of emergency. Showing no sign of mitigation, protest swept over the whole country. The people soared up with new slogan, chanting the “Fall of the Regime”.

Looking back at the Arab spring, this same slogan was also heard in Egypt and other Arab countries. The people of Egypt overthrew Hosni Mubarak, a dictator in power for over three decades and elected their first democratic president Mohamed Morsi only to be removed by General Abdel Fattah el-Sisi in a coup d’état. This revolution contained huge crackdown on protesters, mass murder, farcical trials, leading to a dramatic turns of events ending with the release of Hosni Mubarak and the death of Mohamed Morsi in jail.

Revolution is not something new for the people of Sudan. It has a history of two more revolutions before. But none was deadlier than this one of 2019.

Now, in Sudan, the regime of Omar al-Bashir has fallen. When the protest began throughout Sudan, the government-led mass crackdown killed hundreds of protesters during their peaceful sit-in. So, the military thought the bloodshed was enough and deposed al-Bashir from power. Everyone was happy, delighted by a successful revolution. Congratulations to the people of Sudan kept coming from all over the world. If it was a movie or a novel, perhaps, the story would have been ended here. But in reality, the story has just started. After al-Bashar was gone from the picture, when civilian started to hope for a fresh start, the military started delaying the handover of power to civilians. Civilians began protesting again. Another crackdown on protesters began, but this time from the machine of the state that was supposed to protect civilians. The African Union (AU) and Ethiopia initiated a negotiation between civilians and the military. On July 17, 2019, a three-year transition period was agreed between both parties. There were jubilation and crowds on the streets of Khartoum. But why is bloodshed, chaos, and mass protests still ensuing in Sudan? If this continued after an arduous treaty between the military and civilian representatives this means one of the parties is discontent with the deal itself.

On 29 July, 2019, the Rapid Support Forces (RSF), the government’s paramilitary forces shot live ammunition at a group of child protesters leaving five school children dead. Later, nine RSF soldiers were arrested for the killing. It is not a controversial fact that those nine soldiers were just scapegoats. Those soldiers did not act independently, someone from the top should have ordered them to clear the peaceful sit-ins. Some blame the head of RSF, Mohamed Hamdan Dagalo aka Hemeti. But all these crackdowns could not stop the demonstrations and peaceful sit-ins. It is time for the international community to step forward, especially Saudi Arabia and the UAE, to help Sudan establish its democracy rather than arming and financing the anti-democratic clique. The Sudanese people don’t want the same fate the people of Egypt were forced to accept. They want freedom after decades of tyranny and oppression. They want a new morning where their voices are heard and acted upon, not one-party rule and one-man domination. The people of Sudan think that they had enough and it is time to change the system. But, how far can a crowd go during a rain of bullets and in defying those who hold the key to the trigger of a machine-gun?

Revolution is not something new for the people of Sudan. It has a history of two more revolutions before. But none was deadlier than this one of 2019. None was more courageous and bolder as well. The youth of Sudan have shown their intrepidity and audacity in the face of indiscriminate persecution and suppression. They are still continuing their protests after several deadly attacks that claimed hundreds of civilian lives. No matter what happens, the youth will want to complete the story, the story that they themselves started last year. But still, the uncertainty that is lurking in the closet for this revolution gives rise to the question of whether Sudan is going to have a military dictator like Sisi in Egypt. Even a recent meeting with Sisi by the head of RSF, Dagalo corroborates the fact that Sudan is taking the same path that Egypt took in 2013. But the determination of the youth for democracy and the military’s obstinate cling to power are swinging the country’s future in two directions gradually making it more uncertain to know what the future holds for Sudan.