Sultans of Democracy Demand the Head of Erdoğan

Anti-West sentiments increase among millions of supporters of Erdoğan and even those who oppose him. This rising hate is not because of Marinne Le Pen in France, Wilders in the Netherlands, or the neo-nazis in Germany; it is because of those who support the junta. 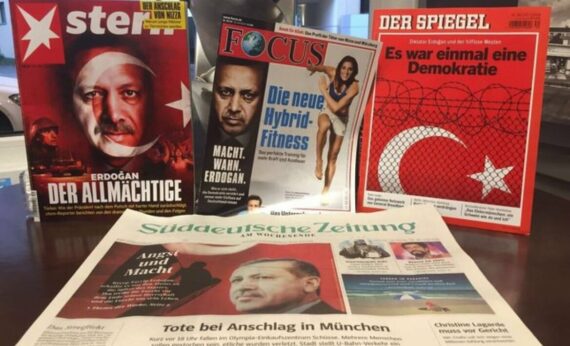 There is a new trend in the West. It has been a couple of years, I believe. Renowned intellectuals, strategists and media outlets are publishing comments, headlines and academic articles about Turkey and its president without remorse and conscience. They are openly advocating for a military junta over democracy, assassination or execution of a leader over the legitimate change in power.

Last summer, with instructions from Fetullah Gülen, a self-proclaimed scholar who continues to reside in Pennsylvania, US, his infiltrators within the army declared that they were seizing power in order to depose President Erdoğan and the government. While the people of Turkey were bewilderedly watching a presenter trying to read the junta’s coup declaration with hands shaking on TV, all hell was breaking loose on the streets. Bridges in Istanbul were closed and surrounded by military vehicles, meanwhile several police officers had gone up the towers of the bridge and were shooting with sniper rifles.

The sound of tanks moving on main roads, sonic booms of F16s and, gunfire on the streets were all mixed up. Everyone was in terror. Many deputies of both the government and the opposition were trying to survive within the parliament as F16s were dropping bombs on the compound. There also was an assassination attempt on President Erdoğan, who was at a hotel where he spent time with his grandchildren. There was an ongoing clash between the assassination team and presidential bodyguards at the hotel, while the headquarters of the National Intelligence Organization was under attack and the Chief of General Staff was being held as a hostage.

People across Turkey took to the streets and thousands in Ankara and Diyarbakır surrounded garrisons to prevent tanks from going out on the main roads. People tried to stop military vehicles and tanks using unimaginable methods.

Whatever was transpiring definitely was a strange situation. Turkey has experienced several coups; however, this time it felt different. It felt like an invasion, an attempt to colonize Turkey; this was what the majority of the people felt, at least. By dawn, the coup attempt was thwarted. There were lifeless bodies and severed limbs on the streets: the tragic stories of the deaths of hundreds of fathers and sons, siblings who stood side by side. Thousands of men, women, young and elderly were being hurried to hospitals.

While bombs were being dropped and the screams of people reached the heavens, renowned academics in the US were tweeting about the coup attempt as if watching a sports match. For instance, Daniel Pipes wrote “He [Erdoğan] deserves to be ousted by a military coup. I hope it succeeds.”, while David Miller wrote “Erdogan was a megalomaniac ruining a great country. Who’s going to miss him?” These academics aren’t some minor figures and they weren’t the only ones writing in such a way. Hundreds of tweets just like the aforementioned ones later transformed into newspaper headlines, analyses in academic journals, and articles. Unbelievable! In the periodical Foreign Policy, Edward Luttwak criticized not the junta itself, but their failure to pull off the coup. According to Luttwak, they failed to realize the “first rule for a successful coup.” What was it? “Capturing or killing the head of the government, first and foremost”! The putschists, who wounded more than 2,000 and killed 246, have “violated the golden rule,” said Luttwak. It was crucial, as “they [the putschists] left the opportunity for Erdoğan to call the people to resist the coup”!

The world-renowned journal The Economist had the same connotation: “The sultan survives”! Similarly, an analyst of Fox News, Ralph Peters, made two obnoxious comments within a week: “Friday night’s failed coup was Turkey’s last hope to stop the Islamization of its government and the degradation of its society.” One week later, he wrote: “[…] now he [Erdoğan] has real support among half of the population, those for whom the fever of faith is the ultimate intoxicant. He polls better than Hitler did. “Mein Kampf” is no match for the Holy Koran.” For Peters, the people of Turkey sacrificing their lives to thwart the coup was not an issue. The one who should die, or deposed at least, according to Peters, was the president, and unfortunately he still alive and was standing tall. Furthermore, the situation was direr as Erdoğan’s supporters consolidated their belief in the president.

On the other hand, the Holy Quran of Muslims was being compared to Mein Kampf, which was written by the perpetrator of the largest genocide on earth. And the Quran was portrayed as a book that could surpass Mein Kampf in terms of atrociousness. This means that in the US and many parts of Europe, the direst of Islamophobic statements, and giving advice on how to violently depose a government and execute its leader is not a crime, but a component of freedom of speech!

The day after, those who believed that Erdoğan deserved the coup and should be executed advocated that Erdoğan designed the coup or at least knew of the coup with the same impunity as before. There were similar headlines published on reputable newspapers which acted in support of these allegations. The Guardian published Gülen’s statement on its website: “Turkey coup may have been ‘staged’ by Erdoğan regime”! 8 days after the coup, while people were still at hospitals or at the funerals of their loved ones, The Independent published a news piece titled “President Erdoğan’s Turkey is modelled on the Third Reich.” Later, the news outlet removed this piece from its website, probably out of shame! Michael Rubin, on the other hand, wrote an opinion on Foreign Affairs website the day of the coup which was titled “Erdogan Has Nobody to Blame for the Coup but Himself.”

Erik Jan Zürcher also wrote that even if the government hadn’t planned the coup, they were in the know and planned what to do after the coup. All of the Western media underscored that only Erdoğan was accusing Gülen and his henchmen for attempting a coup, while disregarding the statements of the main opposition party, other opposition parties, high-ranking generals and academics which were on the same page with Erdoğan. Including the most fervent enemies of Erdoğan, nobody had a doubt that the coup was ordered by Gülen; however, the Western media ignored all of these, as if there was an accord among them. Lastly, seven months after the coup attempt, the President of the German Federal Intelligence Service Bruno Kahl said “We don’t believe the coup attempt was made by Gülen” in his interview with the journal Der Spiegel. As the German intelligence is still intact, Kahl’s statement has only one meaning: “We are supporting Gülen.”

After thwarting the attempt, the government had to dismiss all members of this organization from the state, while closing down media outlets and private enterprises which supported the said organization. A state of emergency was announced for this reason and all of these were done. Then, these were deemed similar to the applications of Stalin and Hitler. However, no one drew a comparison with the time when East and West Germany were united and thousands of civil servants (who weren’t infiltrators like Gülenists) in East Germany were dismissed, even though it was a much more controversial process than the one in Turkey.

It’s not a crime to demand the head of a leader in the West!

The propaganda by the Western media which emerged with the July 15 coup attempt are continuing and getting worse by the day. Regardless of the issue, who and what kind of violent action is put against Erdoğan, the result doesn’t change. Turkey experienced this once again last week. Due to the referendum for a change in the system of government which is to take place on April 16, both the ruling Justice and Development Party (AK Party) and the opposition are concerned with rallies in Turkey and abroad. There are more than 5 million Turkish citizens living in various countries of Europe. This population which has dual citizenship is able to cast their votes in Turkish elections.

Germany and the Netherlands didn’t show any kind of opposition against the Turkish parties which are advocating the no vote in the referendum during their rallies in their countries; however, this wasn’t true for AK Party. Last week, the Turkish FM’s travel permission was revoked by the Dutch government, while the minister of family and social policies was barred from entering the Turkish consulate (which is considered a territory of Turkey) in Rotterdam, later to be deported with a police escort. Moreover, they released attack dogs on people who took the streets to protest these actions and these people were also beaten by the police.

This treatment was not acceptable at any level; however, a single visual became embedded in the minds of Turks: a police dog biting the leg of a young male, while a police officer is keeping two protesters who are trying to help that person at bay with a baton. This visual was just like the ones showing torture at Abu Ghraib prison during the invasion of Iraq. After this, the main opposition party CHP demanded relations with the Netherlands to be suspended. Opposition parties and all people regardless of their opinion of Erdoğan condemned the treatment that was shown to the Turkish citizens and ministers. Meanwhile, the Blick daily in Switzerland published a Turkish headline: “Vote no against Erdoğan’s dictatorship.” Again, in Switzerland, a far-right crowd made a demonstration, probably with a permit as no police officers interfered, with ugly masks, calling the Turkish citizens to vote no in the referendum. These visuals were so abhorrent that Aykut Erdoğdu, a deputy of the main opposition party CHP, couldn’t hold himself and tweeted the following: “To whom the actions of these racist bastards in Europe are serving in the referendum?”

The target of those who carry out this abhorrent, anti-democratic and illegitimate campaign is the only politician who could garner 51.8% of the total votes in the first ballot. Anti-West sentiments increase among millions of supporters of Erdoğan and even those who oppose him. This rising hate is not because of Marinne Le Pen in France, Wilders in the Netherlands, or the neo-nazis in Germany; it is because of those who support the junta, see assassination as a legitimate method to depose an elected leader, and feign ignorance about a malicious organization which has infiltrated state institutions for 40 years!