Opposition groups fighting against Bashar al Assad and allies in Syria agreed on Friday to send a united delegation to next week's UN-brokered peace talks in Geneva. 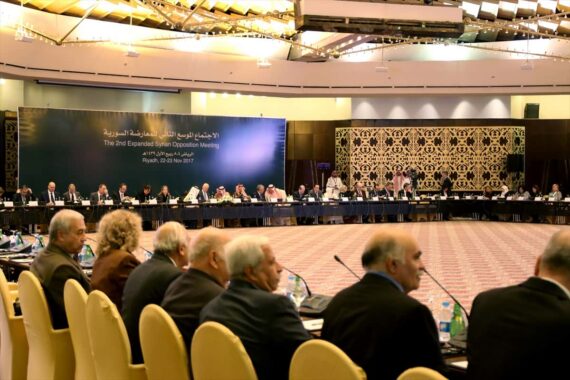 After six years, the death of 330,000 and the displacement of millions, the Syrian war is finally showing signs of completion of full circle. Amid the desperation to put an end to war and their frustration, the opposition groups fighting against the Assad regime and allies in Syria agreed on Friday to send a united delegation to next week’s UN-brokered peace talks in Geneva.

A member of the Syrian opposition, Bassma Kodmani told reporters in Riyadh on the second day of Saudi sponsored talks, “We have agreed with the groups here in Riyadh, along with the Cairo and Moscow platforms, to form one united delegation to participate in the Geneva talks.”

In an attempt to form a united front before they go for direct talks with the Assad regime in Geneva on November 28, 140 oppositions figures have gathered in Saudi capital Riyadh.

Accordingly, Bassma said 50 representatives would be selected for the delegation and names are expected to be finalized on Friday.

This announcement could be seen in the backdrop of rapidly changing balance of power in Syria where Assad is gaining more and more power. Opposition groups have come under heavy pressure to abandon their demands and come to the table.

On the first day of talks – Thursday – three opposition groups based in Cairo, Riyadh and Istanbul decided to join together.  Moscow-based Syrian opposition group also seem to have joined forces with that delegation.

Assad must step down

However, amid the reducing demands of opposition groups in Syria, they still maintain their one foundation demand: Assad must step down from power as a condition for transitional phase to end the war. The demand though was met with “reservations” from the Moscow group.

There were opposition figures who bycotted the meeting. Riad Hijab of High Negotiations Committee, which is backed by Saudi Arabia, and Jamil – a Mascow backed group.

The UN’s Syria envoy, Staffan de Mistura, who attended the opening session of the Riyadh talks on Wednesday said the goal of the meeting was to give momentum to next week’s peace talks.

For Syrians this is the time of full momentum the international community – which includes most of the parties involved in Syria’s civil war – has engaged in a wide range of talks. Russia, as an ally of the Syrian regime, is soon to organize a “congress” to bring together Assad’s side and various opposition groups to revive the peace talks.