Turkish President Recep Tayyip Erdoğan sent a clear message to friends and foes alike that Turkey is strictly against sectarian policies and denounced any attempts at deepening the divide between Sunnis and Shiites. 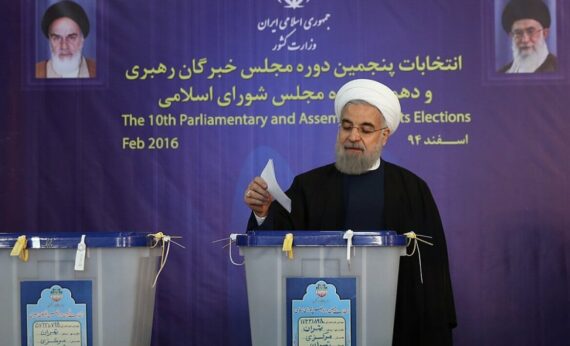 “The enemy pursues infiltration into the elections; people must be aware and act contrary to what the enemies want.” This is Iran’s Supreme Leader Ali Khamenei’s warning to the electorate and the candidates about a week prior to the elections held in the country on February 26, 2016. In this unusual notice two major factors played a role. Firstly, the elections were held to determine not only the 290 members of the Islamic Consultative Assembly, otherwise known as the Iranian Parliament, who serve four years but also the 88 clerics of the Assembly of Experts, a critical body of the power structure in Iran, who are also popularly elected for an eight-year term. The Assembly of Experts is responsible for electing the Supreme Leader from their ranks, as they did in 1988 when the current Supreme Leader was elected upon the death of Ayatollah Khomeini, and can even remove him if he is seen as unfit for the position.

WorldBy Silan Cecen
Considering the advanced age, 76 years, and the poor health of Khamenei, there is a possibility that the newly elected Assembly will be charged with electing Iran’s third Supreme Leader. Secondly, the elections, especially for the parliament, came at a critical time with advantages for the non-conservative fronts. The nuclear deal reached between Iran and the P5+1 countries which consists of US, Russia, China, Britain, France and Germany and the consequent lifting of longstanding and burdensome sanctions on the former came shortly before the elections for which the Rouhani government was given credit. Rouhani demonstrated his intention to carry a similar dialogue process to solve some of the pressing domestic problems such as restoring the freedom of the two reformist leaders, Mir Hossein Mousavi and Mohsen Karoubi, who have been sentenced to house arrest because of their involvement in the Green Movement in 2009. Thus, conservative power holders, most notably the Supreme Leader, used every opportunity, during and after the nuclear talks, to denounce the Americans and warn Iranians of the malevolent enemy, closing the door on such expectations.

Considering the advanced age, 76 years, and the poor health of Khamenei, there is a possibility that the newly elected Assembly will be charged with electing Iran’s third Supreme Leader.

With a slightly over 60 percent voter turnout, 68 of the 290 seats in parliament had remained empty on February 26 when no clear winner emerged; according to the Iranian laws, a candidate must win at least 25 percent of votes cast in an electoral district to qualify as a deputy. These 69 deputies have been elected in the runoff election held on April 29, 2016. A number of distinctively Iranian features – some essential, others conjectural- make a comprehensive appraisal of the election results challenging. For instance, no political parties as such exist in Iran and the seats of the deputies are determined by drawing lots every six months. Besides, only about half of those who registered to run for parliament, 6,229 out of 12,000, were approved by the Council of Guardians. So, many notable reformists were disqualified by the Council and Iran experienced yet another conservatively well-engineered pre-election process. Further, the right–left political spectrum as it exists in Iran hardly makes any sense in other contexts. Therefore, one should not overstate the results in favor of the vaguely defined reformists.

Yet, certainly the results were utterly disheartening for the conservatives who lost all of the capital’s 30 parliamentary seats to the “List of Hope” of the reformist-moderate fronts. For instance, while Mohammad-Reza Aref, the former presidential candidate and a professed reformist, was among the thirty elected deputies from Tehran, Gholam-Ali Haddad-Adel, the principal candidate of the conservative camp, was denied a seat in parliament. A similar result came out of the Assembly of Experts’ elections. While Rouhani and former President Hashemi Rafsanjani were elected to the Assembly such principle conservative figures as Muhammad Yazdi, the current ultraconservative Chairman of the Assembly, and Ayatollah Mesbah Yazdi, one of the protagonists of conservative thinking, could not make their way to the new Assembly.

For a long time, Iran’s Middle East policies have turned attention away from its domestic developments and towards its foreign policies. The country seemed to many a monolithic body which, say, pursued harmonious policies to preserve its strongholds in Iraq or Syria or conducted painstaking talks over its nuclear question. Yet, major disagreements between conservatives and non-conservatives have existed throughout; disagreements which surfaced again during the last weeks. Now that the next presidential elections are only a year and a half away Iran has a lot to debate at home. Above all there are economic issues which are among the direst problems for most Iranians. Inflation is still high, the number of the unemployed is on the rise, income inequality is becoming greater and even the essentials are getting harder for low income groups to afford. The nuclear deal has not yet produced the expected outcomes for the Iranian economy. The economic problems are and will continue to be amongst the most challenging for the Rouhani government.

It is safe to suggest that the gap between the conservative and reformist policies will continue to widen in the newly elected 10th Parliament.

There is also the current government’s reformist agenda. Although Rouhani and other prominent moderates and reformists are among the outspoken supporters of the Revolution and the Islamic Republic regime they differ from the conservatives on some crucial points. They see the future of the regime in being willing and able to meet the plausible popular demands which can fill the growing gap between the state and society. Economically speaking, they favor, in the words of Rouhani, a ‘competitive economy’ which will attract foreign capital into the country, while the conservatives see, what Khamenei calls, a ‘defensive economy,’ which basically refers to the promotion of home industries that will remove the need for foreign imports, as the only viable policy.

The favorable election results will bring a challenge on a macro level since the frustrated conservatives will probably follow more aggressive policies against the government. Therefore, it is safe to suggest that the gap between the conservative and reformist policies will continue to widen in the newly elected 10th Parliament. Also, disheartened by the long list of disqualified candidates many pro-reform voters boycotted the elections. Rouhani needs to convince them to vote for the next presidential elections in 2017 for which his economy performance, but not only, will play the determining role. Yet, considering the many inexperienced deputies and the numerous moderates who have been elected from the ‘List of Hope’ and the approximately 80 independent deputies as potentially key groups in parliamentary politics, it is not clear to what extent they will be able to back the Rouhani government and act harmoniously. On his Labor Day speech, Rouhani commented on the results and said that, “people chose the best people in the elections, and we are happy that the next parliament will be more coordinated with the government.” This, more than anything else, remains to be seen.

Iran and its Neighbors

Turkish President Recep Tayyip Erdoğan sent a clear message to friends and foes alike that Turkey is strictly against sectarian policies and denounced any attempts at deepening the divide between Sunnis and Shiites.

Having lifted the Western-imposed isolation by the nuclear deal, Iran is on the edge of a new isolation, this time by its Sunni neighbors which have been disillusioned by the former’s regional policies, as reflected in the Final Communique of the 13th Session of the Islamic Summit Conference held in Istanbul in mid-May 2016. In that, Iran was deliberately criticized for supporting terrorism and interfering in the affairs of Middle Eastern countries including Syria and Yemen. Further, in his speech during the Summit, Turkish President Recep Tayyip Erdoğan sent a clear message to friends and foes alike that Turkey is strictly against sectarian policies and denounced any attempts at deepening the divide between Sunnis and Shiites.

It would be an overestimation to suppose that the Rouhani government is necessarily at odds with the conservative establishment on such critical foreign policy issues as Iraq, Syria and Yemen but it certainly supports more friendly relations with its Middle Eastern neighbors, primarily Turkey. Rouhani declared, in his visit to Ankara following the Summit, his intention to improve relations with Turkey and added that the post-sanctions era brought about a suitable environment for such a development. The new parliament provides a good opportunity for both Rouhani and Iran’s neighbors, primarily Turkey, to build mutually beneficial and reciprocal relationships. This can also help solve some of the region’s chronic problems.