The 300 French Horsemen of the Apocalypse

Just as France did not act with religious motifs while colonizing Africa, it also did not employ such motifs in recent history, for instance while overtly supporting the Rwandan genocide during the 1990s. But still, French people are very fond of making references through religion. If this is the case, then they can get to the roots of this problem by looking at their “religion of Enlightenment.” 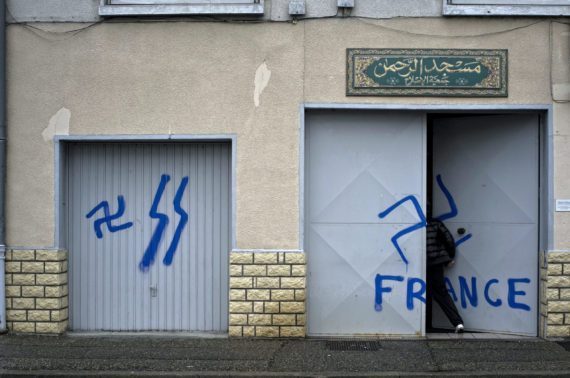 A worshiper opens the door of a moske where nazi graffiti had been sprayed, on December 20, 2011 in Décines, a neighboring suburb of the French southeastern city of Lyon. Getty Images

One actually hesitates while reacting to the latest manifesto signed by 300 French intellectuals and politicians published in Le Parisien since it is hard to take it seriously. It is an absurd and odious call, but the individuals who have signed it are neither ordinary nor marginal figures. Contrarily, the list includes former French President Nicolas Sarkozy, chief rabbis, former prime ministers, ministers, intellectuals and artists from all political spectrums. The manifesto reads: “We demand that the fight against this democratic failure that is anti-Semitism becomes a national cause before it’s too late. Before France is no longer France.” For this, they suggested Muslims to delete some verses of the Quran!

They do not need to panic since France is obviously still France, as the manifesto demonstrates. France is a country abetting Germany in anti-Semitism and the massacre of six million Jewish people 77 years ago. As already known, France is not a Muslim country. And the European continent is a place where such racist tendencies are occasionally ignited across the countries, especially in France.

On the other hand, the Ottoman Empire was a Muslim country while it welcomed the Jews deported from Spain 526 years ago. Also, the Republic of Turkey, a Muslim country again, is known to have hosted Jews who fled the Holocaust perpetrated by Germany and France. Whereas Turkey is a secular country, the Ottoman Empire was governed with Islamic sharia laws. The Quran, the Holy Scripture of Muslims, rules that the downtrodden should be helped regardless of their faith.

The 11 Jewish people who were killed in France in the recent period were shown as the justification of this manifesto. It is known that those killing ten of these 11 people were terrorists. For a terrorist, the victim’s religion does not matter. Also, it is a fact that Daesh mostly killed Muslim people up until now. Besides, the two people who were taken into custody on suspicion of killing 85-year-old Mireille Knoll are ex-convicts involved in petty offenses. But the victim of the attack was a woman who could barely escape from labor camps during the time when France was collecting and sending Jewish people in its territory to the camps.

Of course, representing a petty crime as an anti-Semitic crime by manipulation is a major political offense. There are different versions of this. For instance, while Palestinians are considered “terrorists,” the Israeli state is regarded as democratic, and its acts such as murdering and displacing Palestinians and occupying Palestinian territory are named “operations.” Although it does not apply to all the French, we know that those signing this manifesto do think exactly that way.

According to these 300 French people, “French Jews are 25 times more at risk of being attacked than their fellow Muslim citizens.” They go on to suggest that ten percent of Jews were forced to move out of their neighborhoods, which constituted a “silent ethnic cleansing” according to them. This calculation is not accurate since societal phenomena cannot be reflected through numbers and arithmetic. The danger is alarming. Across the European continent, racist tendencies led by France awakened again. Far-right ideas came into prominence in every political spectrum, including both left and right. The 300 influential French figures consider 1.5 billion Muslims potential murderers. Also, the Muslim people in France, who comprise the greatest Muslim population in a country across Europe, do not consist of the converted. Most of them originally came from the French colonies in Africa during the 1970s, where France has exploited the resources for years.

According to the ones signing the manifesto, alongside Muslims, some French intellectuals regard such anti-Semitism as a societal revolt in the name of anti-Zionism. They claim that a similar mindset is prevalent in some far-left groups aside from far-right anti-Semitism, which are implemented with populist motifs since the Muslim electorate decuples the Jewish electorate.

Undoubtedly, this manifesto is the product of a provocative, authoritarian and fascistic mindset, as can be viewed from every aspect of the text. Considering that the people signing the manifesto do have a power of representation, then it means that both Jews and Muslims in France are in jeopardy along with the rest of the population. Certainly, there is an atmosphere reminiscent of the 1930s. The same old mindset has been altered and tailored to the current conditions.

Just as France did not act with religious motifs while colonizing Africa, it also did not employ such motifs in recent history, for instance while overtly supporting the Rwandan genocide during the 1990s. But still, French people are very fond of making references through religion. If this is the case, then they can get to the roots of this problem by looking at their “religion of Enlightenment.”