Why did Ekrem Imamoglu win the Istanbul Elections?

The consolidation of all parties against the AK Party is the main reason behind the success of Imamoglu on June 23. This is directly related to the new pre-electoral alliance system, uniting all parties in a common goal. 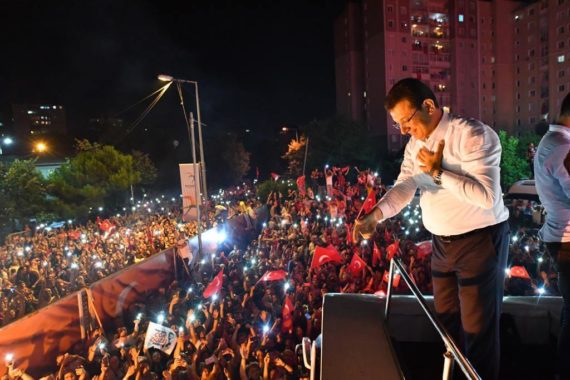 Ekrem Imamoglu and CHP voters celebrate the result of the Istanbul elections on 23 June, 2019. Anadolu Agency

The June 23 Istanbul Election ended with the success of the Nation Alliance candidate, Ekrem Imamoglu. After long-lasting discussions and controversies, Istanbul chose its mayor who will serve for the next five years. Last night also proved that despite all aggressive stigmatizing campaigns, Turkey’s democracy is still very powerful, and that all actors and parties can come to power when they get the support of the electorate.

It is important to analyze the results of the June 23 Istanbul elections in detail. In the cancelled Istanbul elections, the difference between the votes of the two candidates- Ekrem Imamoglu and Binali Yildirim- was only 13,000. The AK Party insisted that the recount of all votes in Istanbul may change the results of the election. Nevertheless, the CHP did not accept the recount of all votes. After a long-lasting and highly-debated process, the YSK cancelled the elections due to presiding officers at ballot stations who were not civil servants, which is against the law.

The increase in Imamoglu’s votes cannot be explained with the change in voter turnout.

On the June 23 elections, the difference between the votes of two candidates skyrocketed to 806.415 according to the unofficial results. Why did the slight difference on March 31 show a significant increase on June 23? Firstly, statistics show that Imamoglu increased his votes especially in 11 districts in Istanbul. While Yildirim got more votes than Imamoglu in these districts on March 31, Imamoglu received the majority on June 23. In total, Imamoglu received 572,120 more votes in Istanbul on June 23.

The increase in Imamoglu’s votes cannot be explained with the change in voter turnout. While voter turnout was 83.88% on March 31, it only increased to 84,44% on June 23. Nonetheless, the number of valid votes was approximately 200,000 higher compared to the March 31 elections. It is obvious that Imamoglu received the support of these 200,000 people in the first place.

Another determinant of the increase in the votes of Imamoglu was the supporters of other political parties. There had been 29 mayoral candidates on March 31 and most of these candidates withdrew their candidacy in favor of Imamoglu. Even though the Felicity Party did not withdraw its candidate, the comparison of the March 31 and June 23 elections show that approximately 56,000 Felicity Party supporters voted for Imamoglu or did not go to the polls on June 23.

All parties should be more careful in understanding the dynamics of the new system in the long-term.

The results of the June 23 elections show a significant decrease in the votes of Yildirim. Compared to the results of the March 31 elections, Yildirim lost approximately 220,000 votes on June 23. Although this number is taken into consideration with the almost stable voter turnout, it is seen that most of these voters changed their decisions and vote for Imamoglu on June 23. It is possible that these voters were not convinced about the cancellation of the Istanbul elections.

All this data shows that the consolidation of all parties against the AK Party is the main reason behind the success of Imamoglu on June 23. This situation is, indeed, directly related to the new pre-electoral alliance system, uniting all parties in a common goal. Thus, all parties should be more careful in understanding the dynamics of the new system in the long-term.