From 2003 up until the present day, Recep Tayyip Erdoğan has towered over Turkish politics and has been the most internationally visible and influential Turkish leader since Atatürk. 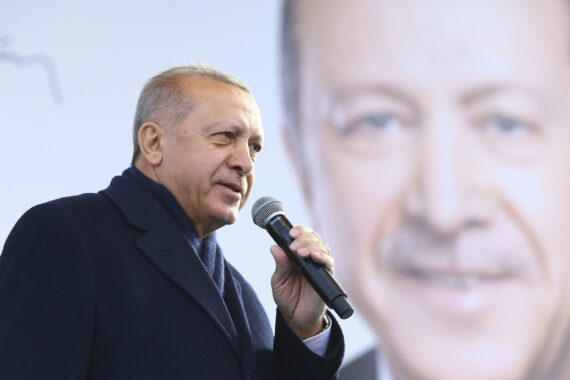 President of Turkey and the leader of Turkey's ruling Justice and Development (AK) Party Recep Tayyip Erdogan during his party's rally at Duzce province. Anadolu Agency

From 2003 up until the present day, Recep Tayyip Erdoğan has towered over Turkish politics and has been the most internationally visible and influential Turkish leader since Atatürk. As such, if he were to retire from political life tomorrow, it could be said with objectivity that his effect on Turkish politics and society has been monumental and that under Erdoğan’s leadership, Turkey’s economy has modernised, its society become more materially equal, its role as a major international player has increased and its global partnerships have diversified.

Of Erdoğan’s many political talents, winning elections is clearly one of them. Since 2003, his AK Party has never lost a national legislative election and he has twice been elected president after passing a series of reforms which changed the nature of the Turkish presidency. This year’s local elections are no exception. The AK party’s alliance with the MHP proved to be a formidable combination even though the leading opposition CHP has made some noticeable gains.

This itself will be important when future generations study the Erdoğan era and realize that as Erdoğan strengthened democratic institutions, his popularity remained largely stable whilst opposition forces were able to stand on their own merits. This is the case because Erdoğan’s anti-corruption reforms helped to largely eliminate the culture of political patronage which stagnated Turkey’s democratic progress in the last decades of the 20th century.

When future generations study the Erdoğan era, they will realize that as Erdoğan strengthened democratic institutions, his popularity remained largely stable whilst opposition forces were able to stand on their own merits.

Furthermore, by injecting fresh ideas into Turkey’s political arena, Erdoğan was able to convince the people that politics could once again be about broad ideas and specific policies rather than about political tribalism and patronage.

Erdoğan’s overall economic record is one that has seen sustained periods of growth whilst Turkey’s robust foreign relations under Erdoğan have given Turks an ever more global perspective on Turkey’s role within the rules based international system of relations.

But most importantly, Erdoğan has prioritized results based politics over the politics of low expectations. This itself explains why during local elections the opposition CHP gained back some political territory that had long thought to have been permanently lost. Because of pressures against the lira due to the provocative actions of western currency speculators, the Turkish economy did not perform as well in 2018 compared with the rest of the otherwise economically strong Erdoğan era. As such, voters were looking for solutions and while most still expressed confidence in the AK Party and its MHP partner, others turned to the opposition for answers. This makes it clear that Turkey’s democracy is in good health as throughout healthy democracies, it is commonplace for long governing parties to lose some ground in the aftermath of a period of economic challenges. In this sense, the fact that the AK Party still dominated the election is a sign that more people still trust Erdoğan’s model than those who were willing to give the opposition a chance.

This itself is indicative of the flexibility that has defined the age of Erdoğan. Because the Turkey of Erdoğan is one that refuses to submit to foreign intimidation, relations with the EU and U.S. have at times been difficult. In spite of this, Erdoğan and his ministers continue to strive for equitable relations with Europe and America. Elsewhere, relations with Russia that in 2015 hit rock bottom, have been rapidly reversed. Now Russia is one of Turkey’s most important trading partners and in spite of some lingering differences, both are cooperating in order to ensure a successful peace process for Syria.

The fact that the AK Party still dominated the election is a sign that more people still trust Erdoğan’s model than those who were willing to give the opposition a chance.

Relations with Iran also continue to improve in spite of some well-known political differences. A recently conducted joint military operation targeting PKK terrorists along with Turkey’s opposition to unilateral U.S. sanctions against Iran are a further sign of good neighborly relations during a difficult time for the region as a whole.

Pakistan’s relations with Turkey have always been strong and under the leadership of Imran Khan’s PTI, relations look set to grow at an even more rapid pace. Imran Khan has often cited the Erdoğan model of economic reform as something to which PTI aspires in respect of reinvigorating Pakistan’s economy.

As an early supporter of the Belt and Road initiative, Turkey continues to increase bilateral trade with China whilst looking to be an important member of the global trading project that will link the wider Asia-Pacific region with the Afro-Mediterranean region. As such, Turkey’s expanding relations with multiple African partners will likewise help the Belt and Road initiative to develop along positive multilateral lines.

One of the next major goals of Turkey is to create more trading and investment opportunities with ASEAN. The Turkish Foreign Minister’s 2018 visit to Singapore during an ASEAN summit helped to begin a process that will ideally result in ever more global connectivity between Turkey and one of the world’s most economically and culturally dynamic regions.

While some Turkish leaders would have seen a period of difficulty with Europe and the U.S. as a cataclysmic event, Erdoğan saw this as an opportunity to strengthen foreign relations elsewhere whilst still demonstrate to both the EU and the U.S. that Turkey is an invaluable trading and security partner. Indeed, without Turkey’s leadership the wider refugee crisis of the Middle East and North Africa may have been far worse than it has been thus far.

Whether working around economic challenges or instigating new opportunities with foreign partners, the age of Erdoğan has seen Turkey become one of the bright spots in a western Eurasian region plagued with difficulties. While the lights of opportunity have shut from Kiev to Cairo and from Sana’a to Gaza, Turkey has remained stable due to strengthened political institutions whilst President Erdoğan’s flexible mentality has seen Turkey go from strength to strength. The fact that the dire 2016 coup is scarcely talked about outside of Turkey is ironically a symptom of Turkey’s success in rapidly restoring normalcy after FETO terrorists conspired to destroy Turkish state institutions. This too is an example of democracy in action during a deeply important period. Had Turks not believed in the importance of state institutions, they may well never have gathered in the streets to confront the terrorists and end the coup only hours after it began.

Whether working around economic challenges or instigating new opportunities with foreign partners, the age of Erdoğan has seen Turkey become one of the bright spots in a western Eurasian region plagued with difficulties.

Just under three years later, Turkey remains one of the few functioning democracies in its region. The key for others to learn from is that without strong economic foundations, ordinary people will quickly lose faith in political institutions. Secondly, without tackling corruption and fighting terror with an unshakable commitment, political institutions cannot develop along normal and healthy lines. Finally, just as a bird requires two wings to fly, a healthy democracy needs patriotic parties on both the left and right in order for the nation to achieve social harmony even whilst political debates continue to rage.

The local elections give the world an opportunity to reflect on how Turkey has gone from an economic basket case to one where rapid development is the rule rather than the exception. Turkey has likewise survived a terrorist coup by strengthening rather than weakening political institutions and patriotic political parties. Lastly, while many western Eurasian powers have ceased thinking beyond their own borders, Turkey remains an active player throughout the world.

Like all larger than life political figures, Erdoğan has many supporters and also vocal detractors. During the local elections, both sides settled their argument at the ballot box and as a result Turkey is stronger as a nation whilst foreign provocateurs who sought to meddle in Turkey have been exposed as incapable of doing so.

Adam Garrie is the director of the global policy and analysis think tank Eurasia Future and co-host of talk show "The History Boys."