The Capital Order leaves even the most skeptical of readers with the question: "Has capitalism lost its innocence to its classist tendencies?" 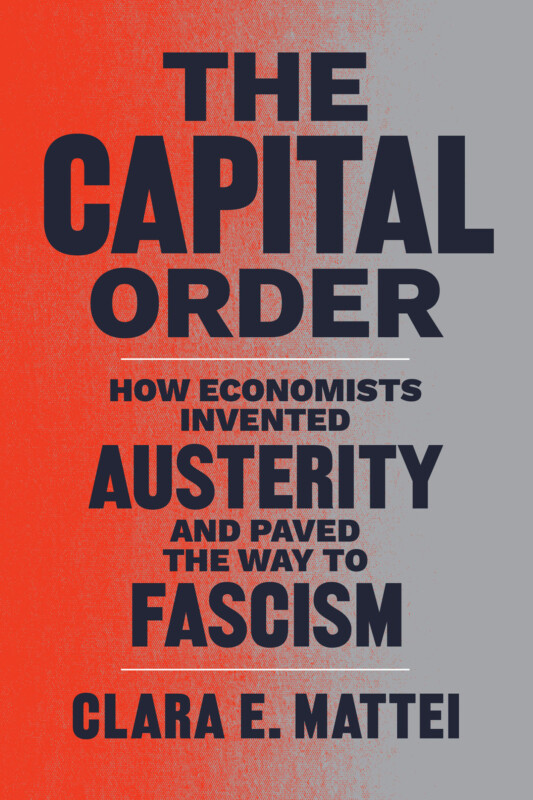 The Capital Order: How Economists Invented Austerity and Paved the Way to Fascism Book Cover

s most of the world collectively undergoes a time of economic crisis, pressure continues to build on the public as governments in the 21st century first look to make cuts from services provided to citizens to contain the negative effects on the economy and increase solvency. Throughout the years, public distress has translated to protests resulting from the decline of social and economic welfare in many countries. The key tool we see policymakers implementing is austerity from the decrease in wages to public benefits cuts.

In The Capital Order, Clara E. Mattei explores austerity as we know it by taking the reader back to its origins: interwar Europe, a time when a new order was emerging as capitalism was fighting its most crucial battle for consolidation. Mattei highlights that after intensive wartime mobilizations capitalism’s inevitability was shattered in the eyes of many workers, and therefore strikes and social unrest increased as more of the population demanded collective power. That is when the austerity counteroffensive was launched.

Read: The Economic Weapon: The Rise of Sanctions as a Tool of Modern War

Mattei brings attention to the fact that despite austerity measures’ failure to deliver their economic promises (such as reducing debt or boosting economic growth) policymakers continue to opt for them. Why so? In this case, she evaluates austerity from a different lens: austerity as crisis management for capitalism rather than the economy.

Mattei argues that austerity functions to discipline society. It enforces the protection of capital and creates conformity in society when means of production and wage relations are contested by the public or when there are calls for alternative forms of social organization. Austerity protects what she refers to as the “capital order” – a sociopolitical order that presupposes economic growth.

Considering austerity’s role in a societal class dynamic, Mattei finds that it insulates capitalist hierarchies from harm during times of would-be social change by placing structural limitations to wages and spending, inevitably imposing it as the only path to a worker’s survival.

Through meticulously compiled archival material, Mattei explores austerity by studying economists in the 1920s from the birthplace of liberalism (Britain) and the birthplace of fascism (Italy) to draw a provocative conclusion about its nature: “an anti-democratic reaction to threats from bottom-up social change.”

Mattei elucidates the thin line between liberalism and fascism that could be derailed by capitalism’s tendencies. The remarkable comparison between the cases of Britain and Italy reveals similarities beyond the sacrifice of citizens. While Italy chose direct coercion, Britain utilized coercion indirectly through a repression concealed in rationality and a seemingly apolitical technocracy that manipulated consensus.

The Capital Order touches upon a period often overlooked by economists when examining austerity. It illuminates the reader on the topics of class relations, the rise of modern economics, and political choice, and leaves even the most skeptical of readers with the question, “Has capitalism lost its innocence to its classist tendencies?”

The Economic Weapon: The Rise of Sanctions as a Tool of Modern War

Also Read
The Trillion Dollar Silencer: Why There Is So Little Anti-War Protest in the United States