Turkey has a long-standing experience of fighting an uphill battle against a variety of terror groups, which are utterly flexible and can quickly adapt to new conditions. 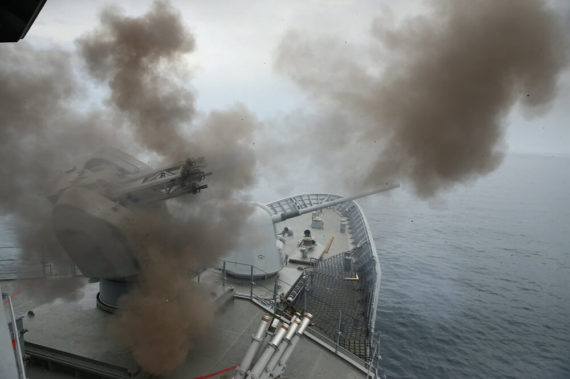 A Turkish naval vessels fires during a military exercise on the Aegean Sea on May 15, 2019 (AA)

David C. Rapoport, a name often referenced in literature on terrorism, explains modern terrorism using a “four waves” theory based on models of political violence that change over the course of history. According to Rapoport, each wave represents one generation with each generation inspired by a different ideology (anarchism, anti-colonialism, socialism and religious fundamentalism). The first wave was the “Anarchist wave” that began in the 1870s and continued until the 1910s, during which achieving a revolution by targeting political leaders and assassinations using explosives took place. The second wave was the “Anti-Colonial wave” prominent between the 1920s and 1960s, led by the political principle of self-determination. This wave was driven by the desire to establish new independent states by overthrowing colonialist administrations, and mainly targeted the colonial police and the military using guerrilla style hit-and-run tactics. The third wave was the “New Left wave” that made its mark between the 1960s and 1980s. It was motivated by a desire to dissolve the capitalist order, and targeted governments like the U.S. During this wave, hijacking, abductions and assassination attempts were common. The fourth is the “Religious wave” that started in 1979 and is predicted to continue to the end of the 2020s, in which the mass media and communication tools are used to target the U.S., Israel and Europe for the intent and purpose of founding a “global Islamic Caliphate,”. In this wave, suicide attacks are commonly organized while air and land vehicles are widely used as weapons.

Rapoport’s “four waves of terrorism” has greatly contributed to terrorism studies in conceptual, theoretical and empirical terms, but it could not escape from becoming one of the most criticized approaches. According to some critics, the four waves theory is problematic for attributing certain types of terror acts only to specific periods, and because the waves do not always coincide with reality. The theory, as argued, might be misleading for attempting to explain terrorist violence using historical trends, which make sharp distinctions between each period. Likewise, Rapoport ignores the fact of “organizational learning”, that is to say he glossed over the lessons that terrorist groups learned from history when developing his wave theory. No matter if they are newly-founded or long-established, terror groups are known to observe, analyze and benefit from the knowledge, experience, success or mistakes of other terror groups; and develop new tactics, strategies and targets peculiar to their own dynamics. By departing from the wave theory and its criticisms, terrorist groups can simultaneously embody different ideologies, and use a plurality of discourses, hence adopting many forms and practices of political violence. Looked at from this perspective, the relations between states and non-state armed actors are no longer considered to be “covert” or “illegitimate” as it was in the past. To put it more clearly, the relationships between states and non-state armed actors are currently more overt and based on legitimate grounds. These relationships increasingly fall within grey areas, which become more and more blurred. This reality, known as “proxy wars” in the literature, explains the dubious network of relations between these actors and also how the actions of terror groups are legitimized by states politically, militarily, diplomatically or judicially.

Turkey has confronted, both directly or indirectly, all four terrorism waves stated above. In this sense, Turkey has a long-standing experience of fighting an uphill battle against a variety of terror groups, which have different purposes and motives, are utterly flexible and can quickly adapt to new conditions in terms of their recruitment and attacking methods. These various terror groups with different ideological causes and target groups, have included the DHKP-C, TKP/ML, MKP, MLKP, THKO, PKK/PYD/YPG, ASALA, JCAG-ARA, IBDA/C (Hezbollah), FETO/PDY and Daesh (ISIS).[1]

Since the early 1980s, counterterrorism gained priority in determining Turkey’s domestic, foreign, security and defense policies, and has become a focal point in Turkish politics. So how has Turkey’s counterterrorism strategy changed over the course of time?  What is the picture of Turkey with growing terrorism experience in the face of terror groups with a growing (organizational) learning capability?  This picture has undergone some substantial changes from the 2000s due to the major transformation of the actors and factors both inside and outside the country. Turkey had to revise and change some aspects of its counter-terror policy during the early 2000s after the PKK, a terror group Turkey has been fighting for decades, adopted an ethnicity-centered separatist discourse in response to changing developments nationally, regionally and internationally although it was originally founded on the basis of a Marxist-Leninist ideology.

Since the early 1980s, counterterrorism gained priority in determining Turkey’s domestic, foreign, security and defense policies, and has become a focal point in Turkish politics.

The 9/11 attacks and the subsequent terror attacks in Istanbul, London, and Madrid at the turn of the millennium changed the course of counterterrorism strategies on a global scale. Security parameters were redefined and military strategies and technologies were reviewed within the framework of a threat and risk-based analysis. This process made it necessary for Turkey to evaluate the military-political transformation in the world and led to an increasing awareness of the need for a military-political transformation of its own. Under this process, a new political will, which prioritized Turkey’s national security and defense according to the needs and purposes of the era, emerged.

Political will was demonstrated when Ankara first endeavored to build a balance between the “civilian” and “military” bureaucracy that determined national security and defense strategies. Ankara projected that this would not be enough to prevent the differing civilian and military divisions from having domination over the other and a reformation of the bureaucracy that would enable coordination, close cooperation and a joint decision-making mechanism was needed. This manifested in the strong inter-governmental dialogue mechanism established between the Presidential Office, Foreign Ministry, National Defense Ministry, General Staff and National Intelligence Office (MIT) that considered foreign, security and defense policies.

The most obvious and tangible conceptualization of Ankara’s changing strategic approach in the counterterrorism fight has been the transition from a “reactive strategy” to “proactive strategy”. Ankara abandoned a “wait and see” strategy and “retaliatory action”, and instead adopted the method of identifying, finding, tracking and neutralizing the enemy in its own place/location in order to prevent any sort of threats, such as carrying out a “pre-emptive air strike” on the PKK’s training camps in Northern Iraq. This new approach was also seen in Operation Euphrates Shield, Operation Olive Branch, and recently in Operation Peace Spring, and is currently ongoing in full force with the “Operation Claw” outside the borders and the Operations Kıran 1-2-3-4 inside the country.

The implementation and functionality of this strategy required Turkey to consolidate its intelligence and operational skills.  Reorganization and reformation endeavors were carried out in many areas including the military system, defense methods, internal security apparatus, joint operations between the Turkish Armed Forces (TSK) and the MIT, and integrated security and defense mechanisms. The reforms made particularly in the security sector ensured a more systematic approach to Turkey’s counterterrorism activities.

In this context, Turkey also strived to reanalyze the scale of threats, including from both state and non-state armed actors, in terms of their conceptual features, means and capabilities and medium or long-term objectives. This was done in line with Turkey’s security perception, risk maps, perpetuity concerns and national interests.

As an extension of this endeavor, the MIT intensified its cross-border intelligence activities, formed a stronger information network by becoming more active in the field and focused investments on human resources to expand and strengthen its intelligence analysis skills. It is obvious that the intelligence analyses will enable Ankara to have more information on the means and capabilities (both quantitatively and qualitatively) of threat factors and thus make decision-making processes more informed while increasing the chances of getting favorable results.

Ankara also focused its attention on ways to eliminate the limitations it faced in its defense capacity. Conflicts of interest with other NATO allies, particularly with the U.S., has always resulted in a heavy price for Turkey. For this reason, Ankara aims to gain an independent status in security and defense while remaining loyal to regional alliances like NATO. Gaining this independence does not mean that Ankara would only cooperate with alternative actors other than NATO. In contrast, Ankara diversified the scope of its foreign suppliers in order to avert dependence on a single source and encouraged existing and new suppliers inside the country. In doing this, Ankara presumed that Turkey will obtain the means and capabilities required for “self-defense”, and now domestic resources fulfill more than 60 percent of the Turkish Armed Forces’ needs. Furthermore, Ankara subjected its defense bureaucracy to institutional reformation and made it answerable to the Presidential Office, while also mobilizing the Turkish defense industry on a pathway to realizing greater technological superiority and global competitiveness.

The increase in the product range and export figures of the Turkish defense industry proves the progress made in this field. Turkey’s employment of its domestic and national defense products in the counterterrorism operations inside and outside the country has been very useful in terms of its institutional reputation and self-assurance. Considering that non-state armed actors today have easier and quicker access to technologies compared to past (such as kamikaze UAV attacks), it must be noted that Turkey cannot afford to neglect the objective of technological superiority.

Ankara has adopted a multi-dimensional approach in its counter-terrorism policy as of the early 2000s. As a requirement of this approach, Ankara has sought to break the impression that Turkey solely resorts to hard power and tried to show that it has been prioritizing a broader position that shows care in using soft power instruments. For this purpose, Ankara has developed a set of measures to prevent terror groups from gaining recruits and supporters while endeavoring to neutralize the terror elements. Ankara also started taking initiatives in social, cultural and educational fields by being cognizant of how vital it is to develop preventive and proactive measures against the “radicalization” efforts of the political and military offshoots of the PKK-YPG-PYD terror network. Allowing language freedom in mass media is only one example of these initiatives.

As a result, Ankara has adopted a model that combines both soft and hard power elements in its counterterrorism policy, which over the course of the past 18 years has made Turkey a more effective country in the fight against terrorism.