Thanking Erdogan for his commitment and effort to solve the Syrian issue, Putin added that “it was really difficult to carry out the workings of these de-escalation zones.” 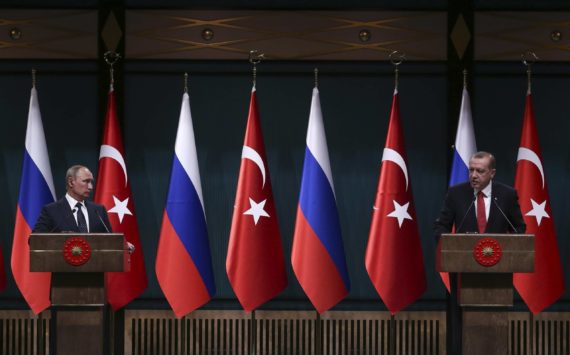 During Putin’s visit to Ankara on Thursday, many issues were laid on the table including Syria, northern Iraq and bilateral relations.

During a news conference delivered by Putin and Erdogan, Erdogan told reporters that the two parties had “discussed regional issues including Iraq and Syria. We both agree on the territorial integrity of Iraq and Syria.”

While new peace talks for solving the Syrian crisis were laid by the UN earlier this week, Erdogan said that “As Turkey and Russia, we have reconfirmed our determination to maintain our joint will and close cooperation to find a political solution for the Syrian conflict.”

In reference to the referendum that took place in KRG-controlled areas in northern Iraq, Erdogan re-emphasized that this vote had “no legitimacy” in terms of the Iraqi constitution and international law.

In regards to the process in Syria, Putin stated that the establishment of de-escalation zones in Syria have given “significant momentum” to the Geneva process, referring to the peace talks between the Syrian regime and opposition envoys.

Thanking Erdogan for his commitment and effort to solve the Syrian issue, Putin added that “it was really difficult to carry out the workings of these de-escalation zones.”

During a meeting in Kazakh capital Astana on May 4, the guarantor countries – Russia, Turkey and Iran – signed a deal to establish de-escalation zones in Syria.

Both Erdogan and Putin said that they had a “productive” meeting and exchanged views on the areas of regional politics, trade and energy.

Erdogan mentioned that the two leaders agreed to boost economic ties even further, noting that the trade volume between the two countries had increased over 22 percent in the first seven months of the year.

He reiterated Turkey’s desire to increase mutual trade volume up to $100 billion.

The S-400 defense missiles that Turkey purchased from Russia have been on the security agenda not only for the two countries but for NATO and the western security alliance.

The S-400 is Russia’s most advanced long-range anti-aircraft missile system and carries three types of missiles capable of destroying targets including ballistic and cruise missiles.

It can track and engage up to 300 targets at the same time and has an altitude ceiling of 27 kilometers (17 miles).

On Friday a Russian presidential aide confirmed that Moscow has received an “advance payment” from Turkey for the S-400 missile defense system.

Earlier this week Turkish Defense Industry Undersecretary Ismail Demir confirmed that the delivery of the missile system would begin within two years.