Simsek said that “The update of the Customs Union agreement will be the most important issue [which will be discussed during the meeting].” 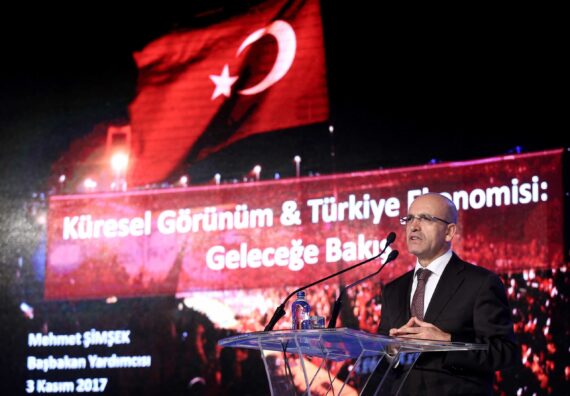 Speaking at the Turkish Export Week event in Istanbul on Friday, Turkey’s Deputy Prime Minister Mehmet Simsek announced that Turkey and the EU will discuss economic relations in a high-level meeting this December.

Simsek added that “The update of the Customs Union agreement will be the most important issue [which will be discussed during the meeting].”

During his speech Simsek also stated that in the next month summits on transport and energy will be held.

Commenting on the upward trend of economic growth in the Euro Zone – Turkey’s main trading partner – and the recovery in global trade volumes, Simsek emphasized that this was good news for Turkey.

In terms of domestic economics, the Deputy PM said that the inflation rate in Turkey will decrease in the medium term with the backing of a tight monetary policy.

“We expect the inflation rate to decline to about 8 percent in the first quarter of next year,” Simsek said.

According to the Turkish Statistical Institute, Turkey’s annual inflation rate rose to 11.9 percent in October.

Explaining the high level of inflation, Simsek said: “The inflation rate in Turkey temporarily crossed double digits due to the current shocks in recent years.”

Another reason for high inflation he claimed is oil.

Simsek underlined that the government is willing to support Turkish exporters, as increasing exports will steer the country out of its current situation.

“Europe is our main market. Our second biggest markets are the Middle East and North Africa. However, we should also focus on developing countries that are gaining grounds.”

In regards to developing markets, the Deputy PM added that exporters should concentrate on countries such as China, India, Brazil, Mexico and Indonesia.