The darkest day in Egypt’s history: Rabaa massacre and its sorrow memory

The Rabaa massacre will always be remembered as a crime against humanity conducted by the post-July 3 military regime in Egypt. With snipers killing hundreds of peaceful protests, people being burnt alive or killed under military vehicles, August 14, 2013, was, without doubt, the darkest day in Egypt’s history. 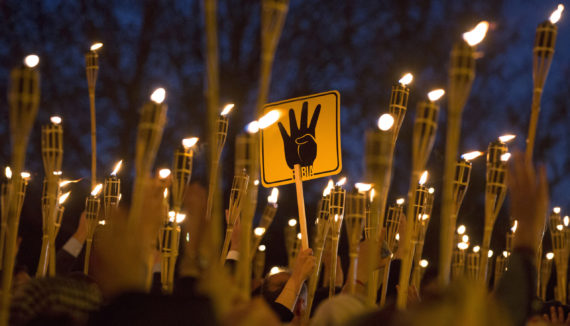 Members of Confederation of Unions of Civil Servants (MEMUR-SEN), shout slogans and flash Rabia sign as they march with torches during a demonstration to protest the Egyptian court's decision of mass death sentence for hundreds of Muslim Brotherhood members outside the United Nations Agency in Ankara, Turkey on April 10, 2014. Anadolu Agency

On August 14, 2013, Egypt suffered its largest civilian massacre; one that had never been witnessed in the country’s history. Egyptian armed forces massacred at least 1,500 people who were participating in a large sit-in at the Rabaa Adawiya Square in Cairo. The majority of these people were members of or affiliated with, the Muslim Brotherhood. The crowd was simply organizing a peaceful protest against the military coup that took place on July 3, 2013, and their demands were simple: the return to democracy and the release of the legitimately elected President Mohammad Morsi, who was imprisoned during the military coup.

The brutal attack of the Egyptian military on the peaceful protesters was essentially a turning point in the course of the 2011 revolution process. The Egyptian military, led by Abdel Fattah Al-Sisi, ended the dreams of millions in the country who hoped to have a democratic political system that ensured them their basic freedoms, welfare, and dignity. The Rabaa massacre marked the beginning of a new era in Egypt in which a regime, even more repressive than Mubarak, came to power.

As a matter of fact, no members of the army or state officials were held responsible for the crimes committed during the Rabaa massacre. In contrast, thousands of Muslim Brotherhood members were arrested in relation to the protests that were organized in Rabaa Square. Many of those arrested were either imprisoned or sentenced to death. On the fifth anniversary of the military coup, the Egyptian parliament approved a bill that proposed to exempt security personnel and army officers from any prosecution that could emerge for any possible crimes since the military coup of July 3, 2013. It has been argued that this law was designed in order to protect members of the Egyptian army who were responsible for the Rabaa massacre and other mass killings.

Thus, this was an additional attempt by the Egyptian regime to protect those responsible for the massacre in Rabaa. The Sisi regime has also made efforts to prevent any claims against its personnel. In addition, regardless of providing social services such as education, healthcare, and religious activities, the regime labeled the Muslim Brotherhood movement as a terrorist organization and initiated a large-scale campaign in order to arrest its members and leading figures. Not only were members and leaders targetted, but anyone that displayed any form of sympathy was also targetted.

The regime was not alone in its oppressive policies. A number of regional and international actors supported the Sisi regime and legitimized its actions. Many Western governments have established normal relations with Cairo and have made efforts to live down its violent repression against the dissidents, including the massacre at Rabaa Square. Among these states are the U.S., Germany, France, the U.K., and Italy, while regional supporters include the UAE and Saudi Arabia. In a strong message of solidarity with Cairo, on the fifth anniversary of the Rabaa Massacre, King Salman of Saudi Arabia hosted Sisi in the Red Sea resort of Neom on August 14, 2018.

Despite the endless efforts of the Sisi regime, the international community still respecs the memory of the Rabaa massacre and reiterates the call for punishing those who are responsible for such atrocities. In stark contrast to their governments, members of civil society, media, and academia have particularly shown solidarity with the survivors of the Rabaa massacre. During the past week, a number of articles and press statements that criticized the brutality of the Sisi regime were released.

Egyptian figures and groups that are not affiliated with the Muslim Brotherhood have also criticized the Rabaa massacre. The socialist, secular and liberal groups in the country see the Sisi regime as responsible for the events that occurred in Rabaa Square and have maintained their critical stance against the regime in this regard. As a response to their position, the Sisi regime has widened its oppression against these groups. In recent months, a number of leading figures from the Egyptian socialist and secular movements were arrested as part of a wide-scale crackdown of the opposition. With such a policy, the repressive regime in Egypt has enlarged the path to radicalization in the country. These oppressive policies of the Sisi regime also maintain the continuation of violence and instability in the country.

The Rabaa massacre will always be remembered as a crime against humanity conducted by the post-July 3 military regime in Egypt. With snipers killing hundreds of peaceful protests, people being burnt alive or killed under military vehicles, August 14, 2013, was, without doubt, the darkest day in Egypt’s history. For this reason, despite all efforts of the Sisi regime to live down the massacre, the memory of the Rabaa will live for generations.