The people who serve "Trumpian diplomacy" are ultra-radical, neocon and pro-interventionists. When the other ultra-radical leaders in the region are taken into consideration, the region’s future does not appear to be bright. 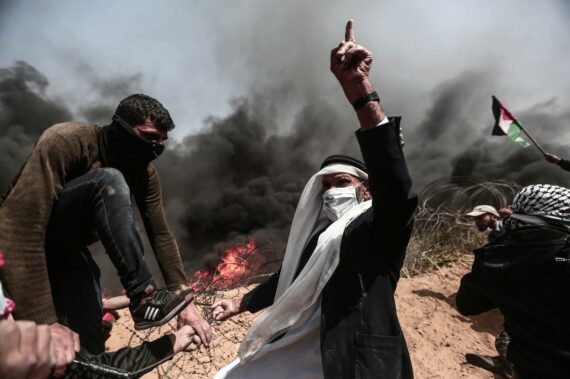 Palestinian protesters set tyres on fire during "Great March of Return" demonstration demanding the right of return and removal of the blockade following the in Gaza City, near the Gaza/Israel border in Khan Yunis, Gaza on April 06, 2018. Anadolu Agency

The Middle East has undergone a massive transformation since the Arab uprising erupted in 2011. The Arab uprising initially rooted from people’s search for democracy, equality, and justice, noting that none of them have ever been at the core of politics since the Western intervention in the region took place. However, the nature of the Arab uprising dramatically transformed itself towards pervasive insecurities and chaos in the Middle East, especially after the spread of radicalization — particularly in the case of Daesh, the conflict-spillover effects of the Syrian Civil War, and the fall of democracy in the Arab world.

Today, from Libya to Yemen, the main characteristic of the new disorder in the Middle East is the proliferation of violent non-state armed groups, the deterioration of state structure, the rise of radical extremism, and the deepening geopolitical antagonism among states, ethnic, and religious groups. This new phenomenon resulted in state insecurity, regime insecurity, societal insecurity, and most importantly, in human insecurity across the region. Each of these outcomes indicate that the very nature of the Middle East order has been undermined by internal, regional and international actors. The new stage highlights that we are at a point where the Middle East is gradually falling into a new wave of crisis, especially after Trump’s accession to power in the U.S.

The Palestinian case is an excellent textbook example to see how Trumpian diplomacy works without diplomats and law without paying respect to international norms in the Middle East. Trump’s decision to relocate the U.S. embassy from Tel Aviv to Al-Quds and the recognition of Jerusalem as the eternal capital of the so-called Jewish State signifies the very nature of Trumpian diplomacy. Additionally, the presence of Trump’s daughter, Ivanka Kushner, and her husband, Jared Kushner, at the opening ceremony of the U.S. embassy manifested how U.S. diplomacy is withdrawing itself from the scene and giving its place to Trumpian diplomacy without diplomats.

As it is mostly believed, Trump’s Israel policy is not a construction of the U.S.’s realpolitik interests in the Middle East; it is a product of the global civilizational conflict perception in which the Christian right, evangelical/fundamentalist Christians and the Orthodox Jewish community in the U.S. are at the center of. The evangelical pastor Robert Jeffress’s invocation at the opening ceremony showed how the judgment above portrays the very nature of this perception. Many people can easily recall Jeffress addressing Muslims as “heretics” in several of his speeches. At this stage, it is not necessary to examine how Trump disregards international law and norms, since Trumpian diplomacy does not consult international norms.

The way in which Trumpian diplomacy destroys the Middle East is not limited to Trump’s messianic decision about Al-Quds. The U.S. secession from the Joint Comprehensive Plan of Action (JCPOA), or the Iran Deal, sealed by the international community, in which the U.S. was an integral part, are other outrageous examples that demonstrate how Trumpian diplomacy undermine  international norms. The Iran deal was a diplomatic success in 2015. Now it invokes a diplomatic ignorance caused by U.S. policy in the Middle East. However, this time round, diplomatic ignorance is not only caused by Trump himself – it is also the consequence of an intra-regional antagonism implemented by Israel to undermine the existing intra-regional balance against itself. For sure, Iran is not the champion of regional stability, but the termination of the Iran Deal is not the best realistic way to contain Iran’s destabilizing role in the Middle East. Calling off the Iran nuclear deal also attempts to undermine Iranian people. It accelerates Iranian politics towards a more radical line.

Another example to see how Trumpian diplomacy destroys the Middle East is the commitment to protect the PKK-YPG’s (which is listed as a terrorist organization by the U.S. itself) interests in northeastern Syria. This commitment indicates the Trump administration’s way of doing diplomacy without diplomats, as well. While the role of military disagreements in Turkish-American relations, particularly the case of the U.S.-PKK connection, shows the decline of diplomacy, it also demonstrates how a tactical concern can become a guideline for overall diplomatic strategy. In addition to that, the increasing rapprochement between the U.S. and the PKK proves the cliché of international politics that one man’s terrorist is another man’s freedom fighter.

These three examples clearly demonstrate that Trump is demolishing the Middle East that we know by undermining the nature of diplomacy firstly, and secondly, by triggering the regional antagonism among the countries in the region. While destroying the historical status of Al-Quds makes the region more conflictual, demonizing Iran generates more instability for Middle Eastern countries. On the other hand, undermining Turkey’s national security by supporting a terrorist organization endangers U.S. interests in Syria and Iraq. Trump’s diplomacy is the new reality for the Middle East, which has perhaps struck the region via a new wave of crisis. Trump and his team are against international law, norms and diplomacy. The people who serve Trumpian diplomacy are ultra-radical, neocon and pro-interventionists. This is very dangerous for the Middle East. When the other ultra-radical leaders in the region are taken into consideration, the region’s future does not appear to be bright.