The Istanbul Summit is much more critical in terms of exposing the vital position of Turkey and Russia in the Syrian crisis, rather than the summit outcome. 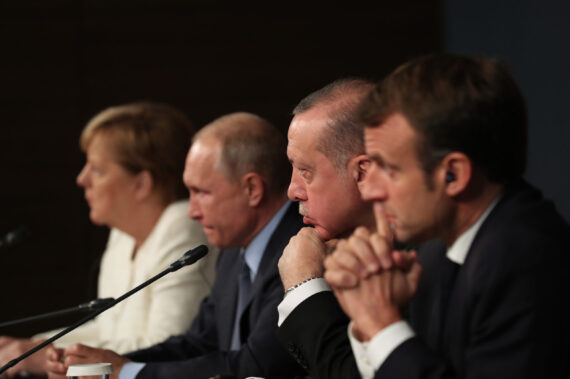 Even though Turkey and Russia have different strategic priorities in the Syrian conflict, they have both turned into vital actors. The Istanbul Summit held between Turkey, Russia, France, and Germany, last month proves this point. The Istanbul Summit is much more critical in terms of exposing the vital position of these two actors in the Syrian crisis, rather than the summit outcome.

Even though the summit was initiated and organized by Turkey, we should reflect on how it was made possible. Although the analyses that came out in 2016 claimed that Turkey had lost its impact in the Syrian crisis, now it’s the opposite. The main reason for Turkey’s transformation into a key country can be explained through several factors. The most effective one among these being Turkey’s direct military involvement in the Syrian crisis.

Turkey made its first military move with the Euphrates Shield Operation. With this operation, Turkey not only eliminated the Daesh threat, but also prevented the PKK from consolidating more power in the region. Turkey also proved its capacity to take more military action in Syria, and enabled the military opposition to re-organize.

Turkey’s second major move was to continue supporting the opposition groups when they were extremely disorganized, lost power and space against the regime, and more importantly, when they were isolated on a regional scale. Through the success of the Euphrates Shield Operation and the agreement made with Russia, the actions taken against the PKK in Afrin have consolidated Turkey’s gains on a more strategic level.

The Afrin Operation yields two significant results: The first one was to reveal that the PKK’s presence in the western Euphrates was unsustainable and to organize the armed opposition under its control. The second was to develop a unique relationship model with Russia and the U.S. Turkey has transformed itself into a critical actor for Russia, while reinforcing its position in Syria through the Astana process.

On the other hand, Turkey kept military options on the table by following a strategy against the U.S.’s PKK stance. Hence, Turkey has become a critical actor for Russia in the context of the solution of the Syria crisis, and for the U.S. in the PKK case in the eastern Euphrates. This strategy has enabled Turkey to achieve gains in relations with these two actors. Turkey resolved the Idlib problem after the Sochi reconciliation with Russia and removed the PKK from Manbij, while persuading the U.S. to establish control over the region along with Turkey and local elements.

One of Turkey’s most critical moves was to take the military and political initiative to solve the Idlib problem. Thus, in Idlib Turkey prevented the regime from organizing a massive operation and the emergence of a new refugee crisis. This move positioned Turkey more prominently in the Syrian crisis and most importantly, has legitimized its position in the eyes of secondary actors such as France and Germany. Additionally, Turkey took a very difficult responsibility to eliminate radical groups in Idlib and reinforced its military position in the region.

The Istanbul Summit came to the fore as a concrete output of Turkey’s achievements thanks to its series of successful military operations in northern Syria and efficient diplomatic initiative in Idlib.

The Istanbul Summit came to the fore as a concrete output of these achievements. Through the inclusion of Germany and France to the summit, Turkey ensured both the re-consolidation of the de-confliction zone and the ceasefire in the context of the Astana talks and diplomatically positioned Berlin and Paris against Moscow. In this way, France and Germany, which benefited greatly from the Idlib agreement, reinforced their support for the agreement. Although Putin repeatedly said that the Idlib agreement is temporary, Turkey has internationalized the political consensus in Idlib as a model for the political settlement of the Syrian crisis.

Now Turkey is waiting for the U.S.’s PKK move. If the U.S. does not give up on its current strategy concerning the PKK/PYD, then a military engagement in the eastern Euphrates seems highly likely.

Immediately after the Istanbul Summit, we saw that the Manbij agreement was put into practice between the U.S. and Turkey as planned. At that point, Turkey made a military signal against the PKK in the eastern Euphrates. Now, however, Turkey will be waiting for the U.S.’s PKK move. If the U.S. does not give up on its current strategy against the PKK/PYD, then a military engagement will emerge as a great possibility in the eastern Euphrates.

The Istanbul summit may not have produced a result yet. However, how Turkey has arrived at this summit is more important than the results. It is likely that the military presence of Turkey in the field, its close relations with the opposition groups, the connection it has built between Russia, Europe, and the U.S. link and its ability to make use of these connections in the field makes Ankara one of the most important addresses in the political settlement of the Syrian crisis. As Turkey responds to the changing dynamics on the ground, it becomes a significant player of the geopolitical game in Syria. Following a balanced foreign policy will further reinforce Turkey’s achievements.