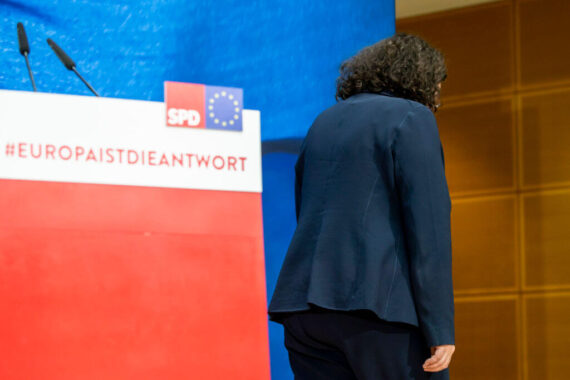 Chairwoman of the German Social Democratic Party (SPD) Andrea Nahles leaves after during a press conference at Willy-Brandt-Haus in Berlin, Germany on May 27, 2019. Getty Images

It is not the first time that Germany’s social democrats suffered a heavy defeat during elections on the federal, state, or recently at European level. In the past couple of years, SPD votes have been gradually decreasing on nearly all platforms. This did not exclude the fact that the party was still determined to build so-called grand coalitions with the country’s main conservative party, the CDU, between 2005-2009, 2013-2017 and once again since March 2018. However, the current coalition once again faces a crisis.

The most striking reason for the current difficulties faced by both parties is the defeat they faced during the European elections on 26 May. Once again, the social-democrat SPD lost many votes. They received 11 percentage points below their previous score, similar to the losses made by the conservatives. The Green Party surprisingly increased its votes and passed the SPD, becoming the second strongest party. As a direct consequence, similar to former chairman Martin Schulz, the SPD’s current chairperson and parliamentary group leader, Andrea Nahles (who became the party’s leader just a year ago and supported a coalition with the CDU/CSU), resigned from all her offices. Thus, in the upcoming months, the party will once again select a new chairperson. Until then, the party will be leaded by a provisional trio.

The SPD received 11 percentage points below its previous score in the European elections, making the Greens the second strongest party.

The current federal government is the third grand coalition under the leadership of Angela Merkel (CDU), who has been head of the federal republic since 2005, when she defeated the SPD-Greens coalition government (1998-2005) and became the country’s first female chancellor. It can be stated that since that day, the SPD gradually lost its electoral base and the broader center-left vote mainly due to its lack of long-term strategy. Another factor contributing to this loss has been Merkel’s surprisingly liberal and to some extent center-left resembling steps.

As a consequence, the SPD’s importance as a so-called major/center-left party symbolizing social rights and social equality has been reduced generally to the margins. Subsequent to the federal elections in 2017 and the party’s heavy defeat, the SPD initially announced that it will not join another coalition government in order to strengthen its own party position. This, however, did not become true and the SPD joined a new coalition government with the CDU due to pressure coming from both the party and from Merkel. As a consequence, the far-right AfD has become the country’s strongest opposition party.

In addition to its losses on the European level, the SPD lost elections in the state of Bremen too. Despite the defeat in Bremen, the SPD still insists on building a coalition government this time with the Greens and the Left Party – a first time constellation in one of the Western states of Germany, which is heavily criticized above all by the CDU and even non-left-wing voices within the SPD.

It’s interesting that Kevin Kühnert (29) is the name being discussed in both German media and leftist political circles as the SPD’s potential new federal chairperson.

Additional reasons for the difficulties and disputes in the current coalition government are certain issues concerning the refugee problem in general, topics such as abortion and other contents of disputes distancing the coalition partners from each other. Besides the different stances between the CDU/CSU and the social-democrats, it’s also well-known that even the positions of Chancellor Merkel (CDU) and her conservative Federal Interior Minister Seehofer (CSU) are different from each other in regards to the government’s refugee policy.

Thus, under these fragile conditions, the SPD nowadays is discussing on the one hand ‘new names’ for the party’s chairmanship and on the other is discussing whether it should quit the coalition at all. In both cases, the party cannot circumvent the question – or even a question interesting both major German parties – by whom and how the SPD should be led. It’s interesting or even experimental that German leftist circles and even the German media stresses the SPD’s young politician, Kevin Kühnert (29), who is the party’s current chairman of its youth organization “Jusos,” as the party’s potential new federal chairperson.

The need for a stable future notion of a major/center-left party is indispensable. Otherwise, smaller parties will most likely reduce the SPD to an insignificant role which in the long-term may even cause difficulties in passing the 5 percent threshold. Thus, the urgent question to be addressed will most likely be how and by whom a modernized center-left party should be headed by. As good news- from the social-democrat point of view- the expectation is that the increase of the Greens is just a temporary trend and that its success will be limited. However, whether experiments regarding a very young potential party chairperson, even with a socialist bias, will be accepted by the electorate is unknown. The additional negative effects of such experiments should also not be underestimated.