The End of History or the End of Democracy in Austria?

Departing from the Japanese-American political scientist Francis Fukuyama’s contention in his “The End of History” thesis that liberal democracy is the final form of political regime that humanity has achieved so far, it can be inferred that the latest turbulences confronted in recent years in the West, especially in Austria, signalize a crisis in democracy. 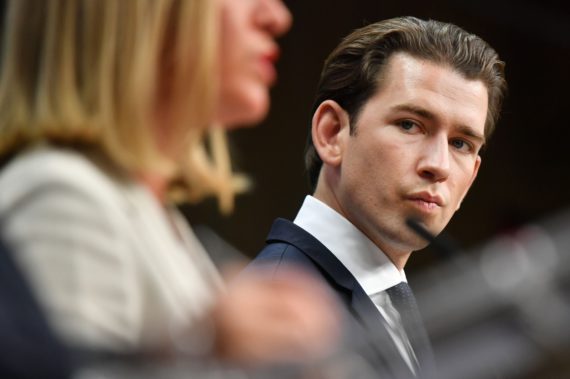 ustria's Chancellor Sebastian Kurz (R) looks on as EU's High representative for foreign affairs and security policy Federica Mogherini (L) speaks at a press conference during the Asia-Europe Meeting summit at the European Council in Brussels on October 19, 2018. Getty Images

Departing from the Japanese-American political scientist Francis Fukuyama’s contention in his “The End of History” thesis that liberal democracy is the final form of political regime that humanity has achieved so far, it can be inferred that the latest turbulences confronted in recent years in the West, especially in Austria, signalize a crisis in democracy. If we assume that right and left-wing populists and far-right groups are within the realm of democracy, it would not be correct to mention a democracy crisis in Austria and the Western world. Presently, far-right groups, who are on the rise and enjoying quite an influence, are trying to underline that they are acting within the limits of democracy by arguing that they are against the establishment. The latest developments have indicated that the discussions will center upon the question of who stays within the limits of democracy. At this point, it is crucial to note that the force who will determine the prominent discourses will have the upper hand in politics.

In this manner, it is required to note that the most important political assault affecting the outbreak of a democracy crisis in the West and Austria has both external and internal sources. The internal political effects comprise radical political movements seen in Western democracies. It can be observed in the case of Austria that the conventional center-right and center-left parties have declined in political influence whereas the forces with far-right or far-left engagement have become more mainstream and appealed to larger masses.

Although the Freedom Party of Austria (FPÖ) has been present in the Austrian political scene as the most prominent far-right actor, a notable organization representing the far-left is not on the horizon yet. This is probably due to the fact that the Communist Party of Austria (KPÖ), the leading political group likely to fill this gap, has not yet recovered from the trauma of the Soviet Union’s dissolution. Nevertheless, since this situation is incidental, it is not a remote possibility that a change might happen in the political composition of the opposite side, as FPÖ develops xenophobic and Islamophobic policies that were promised and expected to be practiced by the party.

As already known, alongside Putin’s Russia that has been aspiring to interfere with European politics, the source of the greatest external threat posed to the system in Europe has been U.S. President Donald Trump for the past two years. In this context, it is important to remember that Trump’s former chief strategist Steve Bannon strived to form an “international right” by trying to gather the far-right groups in Europe under a single roof.

Trump’s former chief strategist Steve Bannon strived to form an “international right” by trying to gather all far-right groups in Europe under a single roof.

Accordingly, we must note that the United States, who “exports” human rights and democracy to other countries across the world according to experts, is now endeavoring to instill right-wing populism in Europe. Through this “movement” led by Bannon, the U.S. is seeking to strengthen the nation-state notion in the EU and stir an internal chaos within the continent as the country sees the Union as a considerable rival. So, the U.S. is trying to maximize its own interests with its pure power policy it practices by liberating itself from one of the “soft” impediments of the liberal democratic order.

Apparently, the FPÖ representatives were afraid that this direction of the U.S. might show themselves as traitors before the eyes of the Austrian public, so they announced that they would avoid a comprehensive cooperation with Bannon for the European Parliament elections to be held on May 23-26, 2019. Along with that, they displayed pragmatic behavior and welcomed Bannon’s works in virtual platform that are in favor of them.

Unfortunately, the following days do not seem very promising for Austrian Muslims. Re-founded among the ruins of World War II, Austria’s governments have always been based on a political conciliation named “Grand Coalition,” formed by the Social Democratic Party of Austria (SPÖ) and the Austrian People’s Party (ÖVP), other than a few exceptions. This situation persisted until the late 1990s. Over the course of that period, Muslims and Turks were not subjected to serious pressure by the political arena, media or public whereas people of color were mostly considered the “others” of Austria.

Through an “international right” movement sought to be established by Steve Bannon, the U.S. endeavors to install right-wing populism in Europe in order to stir internal chaos within the EU – which it sees as a considerable rival.

A new orientation that began with the discharge of the liberals within the FPÖ during Jörg Haider’s chairmanship of the party in the mid-1980s allowed for more visibility for foreigners and people of color. Both SPÖ and ÖVP tepidly responded to this situation, and even though these parties enjoyed short-term election victories, the FPÖ had the upper hand in terms of discourse since the others inclined towards reflecting far-right ideas. In time, in accordance with the strategy of the National Socialist German Workers’ Party (NSDAP), FPÖ started to assert that it represents the interests of the conventional voter base of the center parties including SPÖ.

And as the aftereffects of the 9/11 incidents started to hit Austria, Muslims were designated as the new “other” among Austrian people, which worsened the course of events. The center parties SPÖ and ÖVP did not draw any lessons from their past mistakes and chose to impose pressures on Muslims and practice socio-political restrictions on foreigners in order to break the effect of FPÖ’s discourse. The epitome of these policies is undoubtedly the “Islam Law” that entered into force on March 31, 2015, which restricted the legal rights of the Muslims compared to other official religions of Austria.

The formation of a coalition government by ÖVP’s Sebastian Kurz and FPÖ’s Heinz-Christian Strache is in itself a phenomenon that characterizes the democracy crisis in Austria. Along with the Islam Law, there are many other practices that gradually deprive Muslims of their rights. Haunted by the specter of the February 28 postmodern coup in Turkey, the current practices in Austria such as the efforts to ban headscarf for Muslim women and restrict Muslim people’s education and working rights show parallelism with Turkey during the 1990s. These practices are also reminiscent of the atrocities against foreigners, especially the Jewish people, prior to World War II.

The United States, which apparently “exports” human rights and democracy to other countries across the world, is now aiming to install right-wing populism in Europe.

Turkey provides a mental relief for Muslims in Austria

Paradoxically, Turkey benefits from the turbulent situation prevailing in the West. The Western countries, who used to try to control Turkey by acting as a bloc, are now obliged to negotiate with Turkey without any sign of the past collectivism. The old peremptory nature of the West has also changed. Now, the West can no longer impose pressure on Turkey, but rather Turkey points at Western countries for their Islamophobic, xenophobic tendencies and contradictory behaviors. Although this approach of Turkey does not seem to favor the repressed Austrian Muslims at first sight, it must be underlined that the presence of a harbor to shelter in the long term does at least provide a mental relief for Muslims.