History has not come to an end. The self-appointed enforcers of the existing order have triggered a chain of unintended consequences. After the failure of Western liberalism, a multi-polar balance of power seems to emerge with new centers of gravity on all continents that will not anymore accept ideological hegemony by whichever global player. 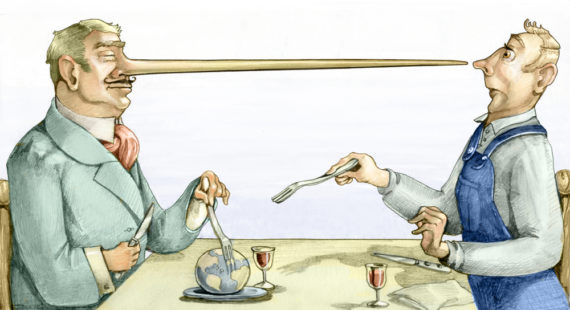 Entering the long list of false prophets, Francis Fukuyama, in the summer of 1989, emphatically announced the “end of history,” suggesting that the progressive collapse of the Communist bloc and the supposed victory of its erstwhile adversary marked the “end point of mankind’s ideological evolution,” and that there existed a “remarkable consensus concerning liberal democracy as a system of government.” Nothing could have been further away from the truth: While history has continued unabated, it is “liberal democracy” that – 30 year’s after its apotheosis as cornerstone of a “New World Order” – seems to approach a premature end. Even in the countries that propagated it at the global level since the end of World Word II, and even more so after the end of the Cold War, its foundations are gradually being eroded and its legitimacy is increasingly questioned as paradigm of a just and equitable political order.

However, this turn of history (unexpected in the eyes of the apologists of the supposedly permanent new order) should not surprise those who analyze the deep structure of politics. From the outset, “liberal” democracy has been a shallow concept. Contrary to Fukuyama’s analysis, it is not “free from fundamental internal contradictions.” In the countries that practiced and propagated it as epitome of dignity and human rights, “democracy” effectively meant élite rule in the form of representation, often in its plutocratic version. Direct participation of the people was in most cases excluded. In the name of freedom, this model of politics – in spite of its internal contradictions – was aggressively enforced worldwide. Under euphemisms such as “humanitarian intervention” or “régime change,” the Western policy of liberal hegemony, under the leadership of the United States, created a number of “failed states,” profoundly destabilized geopolitically sensitive regions such as the Middle East and undermined the very idea of the international rule of law.

The values of the self-proclaimed liberal order were enforced on the basis of the national interests of its dominant actors. For the sake of realpolitik, the legitimate rights and interests of weaker states “on the periphery,” i.e. in the developing world, were subordinated to those of the guarantors of that order. Free trade was propagated as cornerstone of a free world – as long as it suited the interests of the major player. If this was not the case, punitive (unilateral) sanctions made the slogan of free trade – and, with it, economic freedom – virtually meaningless. The practice of double standards has become the rule, rather than the exception, of this essentially imperial strategy.

Under euphemisms such as “humanitarian intervention” or “régime change,” the Western policy of liberal hegemony, under the leadership of the United States, created a number of “failed states,” profoundly destabilized geopolitically sensitive regions such as the Middle East and undermined the very idea of the international rule of law.

The “rule-based international order” that was portrayed as the essence of a liberal world was not in any way liberal either. From the outset, since the foundation of the United Nations Organization after World War II, it has meant a system of power sharing among five states, the permanent members of the Security Council. Because of their veto right, the norms of international law, including the prohibition of the use of force, did effectively not apply to those countries. However, granting a special privilege to a small number of states, and on a permanent basis, is in no way compatible with democracy and fairness among nations. The much-regretted policy of double standards was systemic. When, with the disintegration of the Soviet Union, the power balance among the five veto-wielding powers in the Security Council collapsed, it was ultimately the military power of the United States and its Western allies that shaped the contours of world order and that determined when and under what circumstances the values of freedom and democracy would be enforced.

This “liberal order” is now unraveling. The consequences are felt domestically as well as globally. They are related to the unrestrained exercise of power, including resort to military force, by the hegemon who tried to exploit the power vacuum – after the end of global bipolarity – in order to make its new order permanent. The aggressive assertion of supremacy, in the name of an ill-defined idea, not only undermined the very notion of liberty, but also triggered a blowback effect. An increasing number of states realized that this “liberal order” was in fact a realm of hegemony, and began to organize themselves in new groupings and alliances in order to avoid marginalization. (The formation of BRICS, including Brazil, Russia, India, China, South Africa, and the Shanghai Cooperation Organization is a case in point.)

The rule-based international order that was portrayed as the essence of a liberal world was not in any way liberal. From the outset, it has meant a system of power sharing among five states, the permanent members of the Security Council.

The imperial instrumentalization of the liberal idea discredited the concept in the eyes of the large majority of nations. Instead of a rule-based order in which the norms are set – and violated – by the dominant player, it is now again understood that more than international law it is the laws of realpolitik which determine the fate of nations – and that relations between states are unavoidably conducted within a system of self-help.

Realpolitik trumps a false idealism that has become a tool of power politics and has undermined the very idea of the rule of law between nations. Thus, inadvertently, the dominant West, paying lip service to democracy and human rights, has triggered a development towards a new multi-polar architecture of the globe that may be essentially different from that after World War II.

Domestically, the liberal interventionism of the West has undermined the very fabric of society and eroded the normative foundations of the state system not only in the targeted countries (particularly in the Middle East), but also in the regions where it originated, namely the United States and Europe. An arrogant and shortsighted policy of “régime change,” implemented under humanitarian pretext, produced a number of failed states. This, in turn, triggered long-term destabilization in the targeted and neighboring regions, including Europe. What has become known as “migration crisis” is a direct result of these policies. Causing a split not only among member states, but also among civil society in each state, it has profoundly weakened the political system of the European Union and undermined its very legitimacy.

Instead of a commitment to the co-operative European project, European society has witnessed a return to identity politics that puts at risk Europe’s role as a global actor.

In tandem with the liberalization of the labor market as result of unfettered globalization (that has eroded social standards in the industrialized world and created a feeling of insecurity also among the middle class), the European Union’s inability to manage mass migration has caused a major backlash in terms of social cohesion and political stability in Europe itself. The idea of a liberal world order has become discredited in the eyes of the public.

Instead of a commitment to the co-operative European project – as basis of dialogue with other regions including the Muslim world, European society has witnessed a return to identity politics that puts at risk Europe’s role as a global actor. The most acute expression of this trend is the wave of Islamophobia, in fact anti-Islamic hatred, which is fast entering the political mainstream in key countries of the continent, but also in the United States and other countries. These developments, accompanying the West’s “liberal” interventionism, have effectively undermined the politics of multiculturalism and seem to have made Huntington’s “clash of civilizations” a self-fulfilling prophecy. The rise of what is described as populist nationalism has become a major challenge to the West’s propagation of and commitment to liberal values such as human rights and democracy. In view of increasingly arrogant claims to civilizational superiority, this commitment has lost all credibility.

History has not come to an end, however. The self-appointed enforcers of the existing order have triggered a chain of unintended consequences, which are increasingly beyond their control. After the failure of Western liberalism, a multipolar balance of power seems to emerge with new centers of gravity on all continents that will not anymore accept ideological hegemony by whichever global player.