The End of US Hegemony in World Politics? Trump's Security Doctrine

The seed of crisis sown during the Obama era has blossomed with Trump’s rise to power and the National Security Strategy doctrine is the most apparent indicator of this. 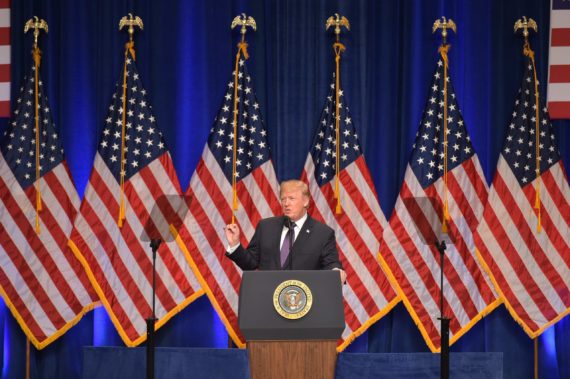 Considering the ambiguity surrounding President Trump’s desired foreign policy, the newly-published National Security Strategy (NSS) is of crucial value. Having been published at a time when debates concerning the end of U.S. hegemony in world politics have accelerated, where new actors in regional developments have emerged on the forefront and where eventual security paradigms have shifted, the doctrine is indicative of Trump’s essential foreign policy vision.

What does the doctrine entail?

The NSS doctrine is a mere product of Trump’s “America First” discourse which was voiced continuously during his campaign. In this respect, the NSS highlights the desire to preserve U.S. territorial integrity, the establishment of security for U.S. citizens and the improvement of the country’s economic prosperity. Beside this general framework and what one may call essential elements required for a national security document, Trump’s strategy also signifies threats posed by both countries developing nuclear weapons and by terrorist organizations in the Middle East.

In his doctrine, Trump claims that he was left face-to-face with many international crises after being elected president and assumes that the majority of U.S. citizens have lost confidence in the White House. With this claim, reminiscent of the discourse surrounding Trump’s presidential election campaign, the NSS document is intended to serve as a paper promise for making “America great again.”

A preliminary look at the document reveals that the U.S. National Security Strategy does not take global concerns into consideration. While the security paradigm has almost been removed from developments in world politics, from the introduction of the document onward, internal security priorities have been given a special emphasis. In an intriguing way the document begins with the expressions of defending and preserving U.S. national integrity. Without reference to the shift in the global political order or the potential threats posed by this shift, the document is shaped by issues rigorously utilized by Trump during his election campaign, such as the wall to be built on the border with Mexico and visa bans. In this respect, the Trump Doctrine, so to speak, inhibits itself into a very narrow alignment.

This brings us to the question as to whether Trump’s NSS is compatible with the priorities expected of a global actor. The fact that the White House has designed such an insidious security approach will also increase the debate surrounding the crisis of the U.S. hegemony. Thus, it is fair to state that the NSS has ignored strategic calculations and national priorities and has been shaped by Trump’s populist tweets that appeal to his very own electorate.

Internal crises and Trump’s failure to establish his own administration served as the major obstacle in front of the creation of a coherent security strategy, and the effect of this has been heavily felt in the newly-published NSS. Not hesitating to use the Jerusalem issue as a tool for internal publicity, it could be asserted that Trump has demonstrated the same disposition in regards to his security doctrine. It is possible to predict that the U.S. President will focus on internal politics until the 2020 elections – indeed, when taking into consideration the short-sightedness of the NSS, it seems very difficult for the U.S. to act as a global actor.

The most prominent challenge is the shift in the international security paradigm – especially the discussions surrounding NATO’s waning functionality, Europe’s attempt to establish its own army and the formation of trade-off alliances, such as the one between Turkey, Iran and Russia, which has resulted in new dynamics in world politics. The NSS document fails to address these changes.

Another issue at the core of the document is the interpretation of international developments. Particularly, when assessing the section concerning the fight against terrorism in the Middle East, the document refers solely to “jihadist” groups – although there are groups in the region that abuse Islam, it is not possible to establish a link between the said terrorist organizations and the understanding of jihad in the Islamic belief. In this respect therefore, suggesting that instability in the Middle East is caused by these “jihadist” groups, the NSS fails to grasp the reality in the region. In fact, it can be argued that incoherent and unstable U.S. foreign policy in the Middle East is the main foundation of instability in the region. In this context, Trump not only intentionally misinterpreted the concept of “jihad,” but has also ignored the grave consequences caused by the U.S. support given to the PKK/YPG terrorist group in Syria.

How does the NSS doctrine perceive global threats?

The NSS doctrine suggests that the U.S. will oppose Russia’s aggressive policies together with its European allies. However, depicting Russia as the primary enemy just like it was during the Cold War era and assuming that the U.S. will develop close relations with Europe through this issue is again far from reality. As a matter of fact, increasing tensions in transatlantic relations and especially problems that Trump has experienced with Germany – for instance trying to undermine Europe’s economic power by putting pressure on Berlin – doubts the validity of this Europe-U.S. alliance discourse.

While suggesting that Russia’s ultimate goal is to weaken the U.S. and its allies, the NSS underlines a potential increase of armed conflict between the two countries. It can be argued here that the lack of coherence and strategy in U.S. foreign policy is what has given room for the increasing presence of Moscow in international politics. This is illustrated in the case of Syria where Russia, as a main actor, has worked in cooperation with both Turkey and Iran in order to end the civil war. In this process, the U.S. remained isolated and the Geneva peace talks aiming to defuse the situation in Syria failed to produce any results. Unable to correctly analyze the pretext of Russian expansionism, the NSS doctrine also falls short on how to prevent it. In fact, if these suggestions were provided, it could have a disconcerting effect within the document – the U.S. would definitely have trouble in establishing a singular strategy that would simultaneously address the “jihadist” groups, Iran, Russia and China. Therefore, disregarding this inconsistency in policy, the NSS doctrine designates Russia as the enemy while proposing vague precautions.

In addition to Russia, the document touches upon China. Claiming that Europe is facing economic pressure from China, Trump’s doctrine draws attention to the importance of transatlantic relations. While by playing the Russian card the U.S. administration is trying to ensure an acceleration in relations with Europe, the Trump doctrine also claims that the U.S. is the panacea for the increasing economic power of China. Thus, by alienating Russia and China, the U.S. aims to gain ground in Europe. However, this plan is problematic due to the fact that Trump has fallen out with many powerful leaders in Europe. Specifically, during an era in which the U.S. and Europe have been identified as the “Two Wests,” it is highly improbable for the U.S. to make an enemy out of Russia and China and to maintain close relations with Europe reminiscent of the Cold War era.

Furthermore, the term “radical Islamist” frequently appears in the NSS document. Along with the deliberate misinterpreted utilization of “jihad,” which was mentioned earlier, it can be strongly suggested that the U.S. has endeavored to typically load the blame of terror onto Muslims – the use of “radical Islamists” as a reference to the terror in Europe is clearly reflective of this. While history has proven that targeting Islam in the fight against terrorism is a flawed method, Trump’s NSS continues to beat a dead horse.

In regards to terrorism, the NSS document asserts that the fight against Daesh is to continue. This is highly ironic as only recently the U.S. administration announced that the threat posed by the terrorist group had been eradicated – this is a mere reflection of the situation U.S. politics finds itself in today. In addition to Daesh, the NSS doctrine also mentions that the fight against Hezbollah is to continue. Trump’s rhetoric against Iran is in fact his message to Hezbollah as by drawing attention to the group, the doctrine expresses the fact that the U.S. will oppose Iran on many different fronts. Despite these discourses, Trump has failed to take any concrete action in the Middle East since the beginning of his tenure. Moreover, the eagerness displayed by the White House to re-affirm its sanctions on Iran has been evaluated as the gate-way and solution for the increasingly hindered existence of the U.S. in the region. With these factors aside, indicating that the U.S. will fight against Hezbollah also signals increasing protection for Israel.

It was inevitable for Trump’s NSS doctrine to go without mentioning the threat posed by North Korea and its nuclear weapons tests. Despite Trump’s squabble with Kim Jong-Un – mainly on Twitter – it seems that U.S. threats against North Korea are to remain in discourse as while the NSS document underlines the capacity of N. Korea’s strategic weaponry, it fails to address how the U.S. aims to counter-act this. This is not the only area in which the document falls short – signifying the advanced weapon technologies of both Russia and China, just like the use of air-defense systems against these countries, Trump’s security measures fall flat in this regard. In short, previous aggressive military policies pursued by the U.S. on the subject of nuclear weapons have been replaced with internal security measures.

The future of U.S. hegemony

The inward-oriented and secluded nature of the National Security Strategy is a manifestation of the international crises that the U.S. is currently experiencing. In this respect, it is clear that the Trump administration will continue with Obama’s “repositioning” strategy, which placed its focus on internal affairs. Trump has maintained policies constructed by the Obama administration’s bureaucrats, has become a captive of Pentagon in terms of foreign affairs and has displayed an irrational line of management. This has reflected on the Middle East and has changed the balance in the region for the first time to this extent since the Cold War.

The lack of coherent policies displayed by the U.S., which have resulted in the increase of Russian presence in the Eastern Mediterranean, has become even more apparent with the loopholes in transatlantic relations and Europe’s attempts to form its own army. Moreover, Trump rejected to compromise with Europe despite increasing tensions and failed to maintain a close relationship with its historical ally, Britain.

In parallel to allowing Europe to become a distinct and separate bloc due to its very own policies, the U.S. administration’s perceptions of Asia are only framed through economic dynamics. It is for this reason that Trump, who has only maintained a discourse-centric fight against North Korea, has failed to take action against the growing power of Asia and the improvement of relations between Russia and China.

Notably, Turkey’s rise to leadership, Russia’s expanding power and the increase of Iran’s sphere of influence in the Middle East, are all parameters resulted from the crises in U.S. foreign policy. The seed of crisis sown during the Obama era has blossomed with Trump’s rise to power and the National Security Strategy doctrine is the most apparent indicator of this. Trump’s doctrine limits U.S. security to its own boundaries – far from a strategic foresight, it is possible to assert that the current international crises will continue as it has given birth to a system of temporary alliances, thus ending the era of U.S. hegemony in world politics.

Also Read
Some Myths about the YPG