The Ethnic Struggle in Kirkuk

The first outcome of the invasion was the US-controlled destruction of civil and land registries in Kirkuk. Those who were exhilarated with the downfall of Saddam and the Ba’ath regime in 2003 did not know what to do when Washington began to “Kurdicize” the region. 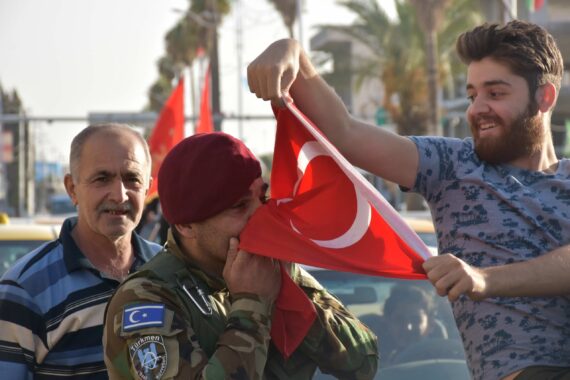 A member of the Iraqi Turkmen Front kisses a Turkish flag after Kirkuk town center had been secured, Iraq, October 16, 2017. Anadolu Agency

“My life Kirkuk, my love Kirkuk

Falling for every word Kirkuk

Far away from the beloved

Whose candle is burning Kirkuk

They destroyed your castle Kirkuk

They cut down your children Kirkuk

Your death was announced from an adorned minaret Kirkuk”

These lines are from an elegy written for those who were martyred during the 1959 massacre.

It’s a historical fact that Turkic tribes travelled to Iraq even before Anatolia. Turk’s journey to Iraq began when Abbasid Caliph al-Mu’tasim decided to form a new army in 836, inviting Turkic Mamluk beys. With the condition of not blending in with the local populace, Turkic troops flocked into the region. Caliph al-Mu’tasim moved the capital from Baghdad to Samarra, a city founded for Turks whose population reached 35,000. Ultimately, Turks served at every level of the Abbasid government. In fact, in his manuscript titled “Tales from the Caliphate Army and Turks’ Virtue,” Arab scholar al-Jahiz wrote that “ideas about racial discrimination in order to protect Islam are false, especially after living under peace and trust that is facilitated by Turks.”

Kirkuk – the capital of culture and politics

The region encapsulating Kirkuk and Mosul was under the rule of Turkic states like Seljuks, Timurids, Jalairids, Kara Koyunlu Turkmens and Ottomans for many centuries. Ruled by the Ottomans for four centuries, Kirkuk was the capital of Mosul Province which was formed in 1850 and more importantly the source for administrators who were commended with the administration of the region. Indeed, despite all political changes, 22 Turkmens, 8 Arabs and 4 Kurds of Talabani and Barzanji families have served as the mayors of Kirkuk between 1875 and 2003. Even after World War I and during the British rule, Turkmens were present in the administration. Despite British occupation and rule, Turkmens never hesitated to side with Turkey in political matters. Due to the Turkmen stance in the Mosul dispute, half-spy half-researcher Gertrude Bell was forced to write that “Turkish families in the region should be closely surveilled by Britain because of their desire for a Turkish administration and opposition to Faisal’s kingship.”

It’s known that Turkmens have lived in Kirkuk city center with extended families since the Ottomans. Constructing an educated class, Turkmens work as traders, medical doctors, pharmacists, teachers and engineers. Rural surroundings of Kirkuk were historically populated by the Kurdish Talabani tribe. While Turkmens consists of Shiites/Ja’faris, Alawites/Bektashis and Sunnis, it is known that Talabanis are usually Sunni/Shafi’i and Barzanjis are Qadiris.

Oil was struck, valor was gone

This continued to be the case until World War I with little changes. However, it all changed after 1920. The swiftly growing oil industry in the British Iraq changed the demographics of the country. While Turkmens stayed away from the oil sector, it was attractive for Kurds and Arabs. Considered as slums, new districts like Arapha emerged with the influx of people to Kirkuk.

Founded in 1921, Iraq has gone through around 20 coups and a similar number of assassinations and political murders. The number of thwarted coup attempts is unknown. Deaths caused by plane crashes, alleged heart attacks and suicides could be also included to these counts, as all of them are questionable.

The reality is that this turbulence continued until Saddam’s rule. With the terror emerging as a result of the tyrannical understanding of the Ba’ath mentality, everything calmed down. Saddam didn’t only eliminate those who openly opposed him; he also killed those who were suspected of opposing along with their families.

Including the Ba’ath rule, all those who were in charge of Iraqi politics aimed to assimilate Turkmens and demographically engineer the cities heavily populated by Turkmens. For instance, Saddam was gifting dowry to all Turkmen women who were marrying with men of Arab descent, while providing houses and employment to Turkmen men who were marrying with women of Arab descent in any city of Iraq, with the exception of Kirkuk. Under the Ba’ath rule, Kurds along with Turkmens were forced to identify themselves as Arabs when officials asked. This policy caused certain Turkmen families, especially the Bayats, to Arabize. Despite this, youth who were believed to be spreading Turkish nationalism and had similar political stances with Turkey were surveilled by the Mukhabarat –the regime’s intelligence agency- and were sentenced to various punishments, including execution.

Those who paid a price for Kirkuk: Necdet Koçak

I want to talk about Necdet Koçak whom I always remember and loved as a brother and whose death still pains me. I know that Necdet Koçak is a symbol of all martyred Kirkuk citizens since 1959 in the eyes of Iraqi Turkmens.

Koçak was born in Kirkuk in 1939. He finished his early education in Kirkuk and then came to Turkey to attend the Faculty of Agriculture at Ankara University in 1958. He graduated in 1962 and returned to Kirkuk. He started to work for the Iraqi Ministry of Agriculture. He came to Turkey once again in 1964 to conclude his doctorate studies. He became an academic at the University of Baghdad in Iraq. He was arrested in March 1979 with the charge of “being a Turkish nationalist.” His wife Ayten Koçak extracts:

“Saddam’s henchmen came to our house on January 15, 1980 late at night. They told me that I could visit Necdet in prison. I went to the prison named Abu Ghraib near Baghdad the following day. They let me in. He [Necdet] was in a miniscule cell that a person could hardly fit, at a pitch-black corridor. Colonel Abdullah Abdurrahman and Adil Şerif were staying in the neighboring cells. Because of the ceaseless torturing, all three of them were exhausted. Colonel Abdullah Abdurrahman had lost his eyes because of diabetes and was writhing. Their bodies were covered with wounds. There were burn marks on both sides of Necdet’s temple. It was obvious that he was tortured with electricity. They didn’t allow us to speak properly. Necdet informed me about execution decision and said that the banner of struggle should never fall. It was his last will. We bid our farewells, then.”

This, and similar stories to Necdet’s did not end with Saddam’s downfall. The last act of the coup which tore the social fabric occurred with the First Gulf War in 1991. Then, the American invasion in 2003 opened Pandora’s box. The first outcome of the invasion was the US-controlled destruction of civil and land registries in Kirkuk. Those who were exhilarated with the downfall of Saddam and the Ba’ath regime in 2003 did not know what to do when Washington began to “Kurdicize” the region. The historical texture was completely eradicated. The era marked by bombings and assassinations aiming to intimidate Arabs and Turkmens, attacks not being investigated and forced immigration of Turkmens to other countries, especially Turkey, has now started.