The European Parliament considers defending Hagia Sophia’s conversion into a mosque an extremism and underlines its opposition to that. However, the decision to open Hagia Sophia to the religious service of Muslims or keeping it as a museum belongs fully to the Turkish state. 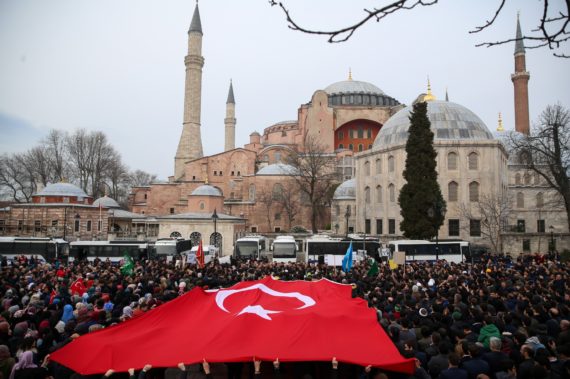 People stage a demonstration condemning twin terror attacks targeting mosques in Christchurch, New Zealand, on March 16, 2019 in front of Hagia Sophia Museum as they unfurl a Turkish flag in Istanbul, Turkey. At least 50 people were reportedly killed in the terror attacks. Anadolu Agency

Lately, the European Parliament went back to the Medieval Age! In the vote to suspend Turkey’s EU membership negotiations, members of the European Parliament, who secure the far-right and far-left seats in the upcoming parliamentary elections in May 2019 demanded a peculiar amendment regarding Hagia Sophia. The issue of Hagia Sophia, which was also included in the U.S. International Religious Freedom Report for the past couple of years, was one of the highlights of the amendments that were voted on Thursday last week. Both the U.S. and Europe adopted motifs that can be seen only in far-right political rhetoric. If the leading figures of modern politics – both in the new and old continents – could turn back to the Medieval Age, then as a journalist, I can remind the reader a set of things from the 1200s.

The Fourth Crusade, which was called by Pope Innocent III and led by Boniface of Montferrat and Balduin of Flanders in the early 1200s, ostensibly aimed to capture Egypt. But according to historians, the Franks captured Istanbul in April 1204 instead, and entered Hagia Sophia, the greatest sanctuary of the time, with mules. They started plundering the church from the wall coverings; they loaded the artifacts, golden and silver crosses and other valuable things that were believed to belong to the disciples of Jesus Christ and Virgin Mary, onto mules. They killed the priests in the church, attacked the nuns. They placed in the chair of the Orthodox Patriarch a prostitute, who sang and danced, sitting on the rostrum where the Orthodox patriarch normally delivered his sermon. After that plundering, Istanbul became the capital city of the Latin Empire that replaced the Byzantine and the nightmare looming over the city continued for 57 years. It is also said that the famous expression attributed to the Byzantine, “We would rather see the turban of the Turk than the hat of a cardinal in the streets of Constantinople” was said because of this. The plundered and stolen artifacts are today showcased in European museums, particularly in Italy.

The late historian Halil İnalcık’s article entitled “The Re-Building of Istanbul by Sultan Mehmed the Conqueror” reads: “Before the Conquest, Istanbul was but a dead city. […] A. M. Schneider, on the strength of testimonies from a number of sources, shows how Istanbul, after its occupation by the Latins in 1204, entered on a long period of decay, in the course of which it became ruralized, vineyards and fields coming to spread over vast areas within the city walls.”

One of the development works initiated after the conquest of Istanbul was for Hagia Sophia: “Before Istanbul’s conquest by the Ottoman Turks, contemporary writers (e.g. Clavijo) pointed out the ruinous state of Ayasofya. The very first act of the Conqueror was to have the famous temple restored. To its repair and to the salaries of those employed in it he allocated extensive pious foundations. In Istanbul proper, Galata and Üsküdar (Skutari) there were 2,350 shops, 4 caravanserais, 51 baths, 987 houses, 32 bozahane and 22 aşhane all allocated to Ayasofya, the total annual income from which amounted to 718.421 akçe (about 13.000 Venitian ducats).”

Mehmed the Conqueror also made a madrasa built on the north side of Hagia Sophia, which was turned into a mosque after he conquered Istanbul. Hagia Sophia went through restoration and maintenance works in every period of Ottoman history, the minarets built by Ottoman architect Mimar Sinan at the end of the building function as structural support as the building suffered damages due to earthquakes. The most extensive renovation works of the building were conducted in the 19th century during the reign of Sultan Abdulmecid. During the reign of Sultan Abdulaziz, the madrasa was demolished and rebuilt due to new rearrangements around Hagia Sophia.

Within this period, eight gigantic circular-framed disks were hung on columns. These were inscribed with the names of Allah, Muhammad, the first four caliphs Abu Bakr, Umar, Uthman and Ali, and the two grandchildren of Muhammad: Hassan and Hussain, by the calligrapher Kazasker Mustafa Izzed Effendi. They are known as the biggest calligraphy medallions of Islamic culture. During the 16th and 17th centuries, mihrabs, minbar, muezzin’s loge, pulpit and maksures were added in Hagia Sophia. The bronze candlesticks located on both sides of the mihrab were presented as a gift to the mosque by Suleiman the Magnificent after his return from the Siege of Buda. The two pieces of marble cubes belonging to the Hellenistic period, which are placed on the right and left corners of the entrance to the main building, were brought from Bergama antique city and presented to Hagia Sophia by Sultan Murad III in the 16th century.

It is obvious that some groups have always been very curious about the future of Hagia Sophia, particularly after the collapse of the Ottoman Empire and the foundation of the Republic of Turkey. We learned about one of the most original manifestations of this curiosity from historian and writer Murat Bardakçı a while ago: “American Jazz Orchestras Association applied to Turkey in December 1926 and offered to turn Hagia Sophia, which was serving as a mosque at the time, into the world’s largest jazz club and promised to bring the world’s greatest jazz orchestras and strongest saxophones to Hagia Sophia. This offer, made to both Istanbul Municipality and the government through the U.S. Embassy, asked the allocation of Hagia Sophia to American Jazz Orchestras Association.” New York Times announced this development in its issue dated 16 December, 1925, with a piece titled “Dance in Hagia Sophia,” which read that an offer was made to turn Istanbul’s renowned Hagia Sophia Mosque into a dance hall, and a group of businessmen applied to the Istanbul Governor’s Office to turn Hagia Sophia into a dance hall by arguing that this giant structure is not fit for religious service.

Fortunately, this initiative did not come true. Nevertheless, serving as a mosque for almost 500 years in Istanbul, Hagia Sophia was closed to religious service and turned into a museum in 1934 as a result of the political and international conditions 85 years ago.

For Europeans, who classify the history of humanity into certain eras (a paradigm that is widely accepted in the world), Sultan Mehmed II’s conquest of Istanbul, or to put otherwise, “the fall of the Eastern Roman Empire,” marks the end of the medieval period and the start of modern history. Hagia Sophia, on the other hand, is one of the most prominent symbols of the conquest. As can be inferred from the various initiatives aiming to transform Hagia Sophia by different institutions of the U.S. and Europe, Hagia Sophia is an important symbol of the Conquest also for the West. Nevertheless, it should be reminded that it has been 566 years since Istanbul was conquered. Despite that, Western states seemingly find it very hard to accept Hagia Sophia as a mosque. But this is what the far-right is all about – its most distinct feature is denying the truth with bigotry and living in dreams.

Despite it being 566 years since the conquer of Istanbul, Western states find it difficult to accept Hagia Sophia as a mosque. But this is what the far-right is all about – its most distinct feature is denying the truth with bigotry and living in dreams.

The article that was proposed and accepted during the European Parliament’s voting of the 2018 report reads: “Calls on the Turkish government to respect and fully implement the legal obligations which it has entered into concerning the protection of cultural heritage, and, in particular, to draw up in good faith an integrated inventory of Greek, Armenian, Assyrian and other cultural heritage that was destroyed or ruined in the course of the last century; opposes, in this context, any extreme view that promotes alterations to the physiognomy of the Hagia Sophia historical-religious monument and its conversion into a mosque; calls on Turkey to ratify the 2005 UNESCO Convention on the Protection and Promotion of the Diversity of Cultural Expressions; calls on Turkey to cooperate with the relevant international organisations, especially the Council of Europe, in preventing and combating illicit trafficking in and the deliberate destruction of cultural heritage…”

The European Parliament indirectly defines Hagia Sophia as a historical-religious monument and cultural heritage belonging to the Greeks and claims that it is Turkey’s legal responsibility to sustain it as it is. As if an authorized body on the issue, the Parliament considers defending Hagia Sophia’s conversion into a mosque an extremism and underlines its opposition to that. However, the decision to open Hagia Sophia to the religious service of Muslims or keeping it as a museum is fully owned by the Turkish state. If an outcome of Istanbul’s conquest affects the voting of the annual report written for Turkey’s EU membership negotiations, this means that far-right ideas gain prominence in the entire political spectrum (If the Parliament really cared about the originality of monuments, then they would have warned against church masses in Cordoba Mosque, the greatest monument of Andalus Islamic civilization, during Spain’s negotiations.) As experienced numerous times in the past, far-right ideology realizes itself with a top-down method, beginning with elites and intellectuals in secure social positions. This has always been the case in Europe, during the two great wars and genocides.

Far-right ideology realizes itself with a top-down method, beginning with elites and intellectuals in secure social positions. This has always been the case in Europe, during the two great wars and genocides.

It would not be a surprise if the Hagia Sophia issue would be included in a terrorist agenda, just as the issue of refugees who migrated to Europe to save themselves from war started in their countries by imperialist powers. After the latest massacre in two mosques in New Zealand that killed 50 people, a 74-page ideological manifesto written by the perpetrator was released. This text, published in three social media accounts belonging to a 28-year-old Australian named Brenton Tarrant, is built on racism and anti-immigrant sentiment. The perpetrator tries to legitimize the terror attacks by referring to historical events and demographic statistics. In the manifesto titled “The Great Replacement,” it reads, addressing Turks: “If you attempt to live in European lands, anywhere west of the Bosphorus. We will kill you and drive you roaches from our lands. We are coming for Constantinople and we will destroy every mosque and minaret in the city. The Hagia Sophia will be free of minarets and Constantinople will be rightfully Christian owned once more.” If the course of events continue like this, new terror attacks might follow as Tarrant followed the steps of Anders Breivik, who killed 77 people in 2011.